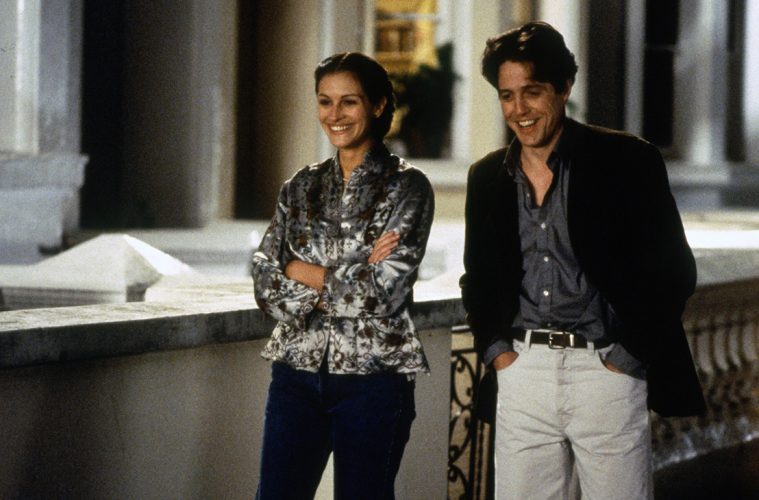 An Ode to ‘Notting Hill’

There are few movies, and even fewer romantic comedies, that stand the test of time quite like 1999’s Notting Hill. It’s a shining star in the mixed bag that is the romantic comedy genre. To put it frankly, the genre typically produces films that are commercially viable but rarely considered much more than a Hollywood recipe – copied each time with little variation to produce similar results. I mean, in 2011, No Strings Attached and Friends with Benefits were released with identical plots, near identical casts, and the same ending. I’m a believer that the recipe analogy remains true throughout the genre, with few exceptions – Notting Hill being one.

It’s hard to pinpoint one trait that makes the film such a standout. Maybe it’s the soundtrack that so effortlessly sets each scene. Few soundtracks are as iconic as this film’s, featuring Elvis Costello, Bill Withers, and Shania Twain on some of its most memorable tracks. Maybe it’s the setting in the city of London, which is certainly a city like no other. Or perhaps it’s the fact that we’ve all entertained this thought, no matter how fleeting: what would happen if we came face to face with the biggest celebrity of our time? What would we say? What would they think of us?

According to the film’s lead, Hugh Grant, Richard Curtis wrote Notting Hill based on the experience that one of his friends had falling in love with a “world famous person.” Curtis would often imagine what it would be like; eating an ordinary dinner at his friend’s house and suddenly a celebrity joins them. Suddenly, these ordinary people have their lives intertwined with someone universally considered to be extraordinary. Maybe that’s why Notting Hill is such a success. It stands in contrast to its ultra-polished successors, staring the likes of Drew Barrymore or Cameron Diaz, who bring characters with as much depth as a wading pool to the screen. Notting Hill isn’t full of the latest, greatest fashions, or perfectly manicured people falling in love on rooftops or in their high-powered jobs. It’s full of completely relatable, completely ordinary people, trying to do their best at navigating the world.

Few films feature characters that feel so familiar, so comfortable that they could be you and your friends. Notting Hill’s characters are the film’s real triumph.

Grant’s William Thacker is the epitome of the unlikely hero. While undoubtedly attractive, Thacker is an awkward man who fails both at love and business – his travel bookstore sells scarcely any books throughout the film, with the exception of the one sold to none other than Anna Scott. Scott, played by Julia Roberts, is Roberts in many ways: an ultra-famous actress known for her talent and beauty by all. She’s a sex symbol, a male fantasy. But, in her own, now famous words, Scott is “just a girl” trying to live a relatively normal life.

The minute they meet, the film feels electric. The chemistry is real – there are nerves and pre-date jitters, many moments of miscommunication, and so many more moments of pure happiness. Watching William Thacker awkwardly offer the biggest celebrity in the world honey-soaked apricots or wearing prescription diving goggles to the movies reminds us of the moments of utter stupidity and embarrassment we’ve suffered in front of our crushes. Watching his friends try to hold it together while hosting Anna at a dinner party reminds us of our loveable and well-meaning friends who would likely act the same way. There’s an ease between the characters – whether we’re watching them talking in bed after spending the night together or watching them walk through gardens, you can feel that they’re meant to be together.

One of my favourite aspects of the film, and perhaps the most important one, is the shift in the typical power dynamic seen in the genre – think You’ve Got Mail or Bridget Jones’s Diary. Unlike Meg Ryan or Renee Zellweger’s characters, Anna Scott has all the power throughout the film. She’s got a successful, well-paying career and doesn’t need saving financially or professionally. She’s well-travelled and confident. She isn’t looking for validation from her romantic partners. She isn’t looking for someone to complete her or save her, and isn’t scared of being alone.

William Thacker, on the other hand, has a failing business and little money. He isn’t seen as a particularly confident or powerful character, and he spends much of the film worrying about impressing Anna. He certainly doesn’t try to control or complete her – he values her as she is. In their relationship as a whole, there’s no sense that one wants to change anything about the other. They love and accept each other as two people who complement each other well, rather than two people battling for control. That’s not to say that they are perfect people. Scott is guarded, untrusting, and quick to push Will away in an attempt to protect herself. She struggles with choosing between her career and her heart, and at some points makes the wrong choice. William is at first too proud and too scared to accept Anna’s declaration of love after he experiences heartbreak at her hands. He is self-deprecating and can’t seem to believe that he deserves the happiness that he has found with Anna.

The characters are flawed and irritating and imperfect. That’s why Notting Hill is so beloved; it wasn’t created to be anything spectacular or special. It isn’t meant to be a glossy story about perfect people with perfect lives and it isn’t meant to be an ideal. Maybe that’s why so many people love it – at the end of the day, regardless of Anna’s wealth and fame, regardless of William’s past love lost, they are just a boy and a girl who love each other. Sometimes it’s refreshing to strip it all back and be reminded that we come from the same mold. We’re all human, and being imperfect is something we can find beauty in. Or at least a few laughs.