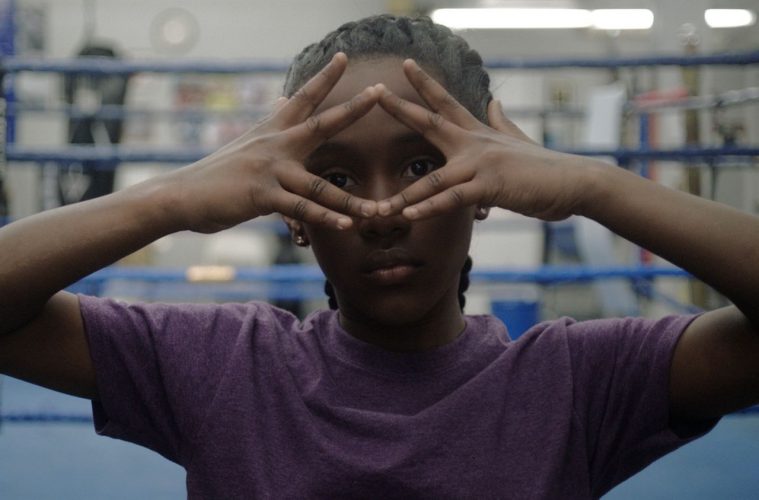 It’s hard to write about my love for The Fits (2016) because it’s a film that leaves you speechless. Directed by Anna Rose Holmer, the coming-of-age thriller captures often ignored aspects of black girlhood through precise cinematography, movement, and a perfect score. Toni (Royalty Hightower) is ready to leave her boxing gloves behind and join the all-girl dance team, the Lionesses. She does everything she needs to do to shed her “tomboy” appearance and reputation to belong. Her plan seems to be going well until the Lionesses are hit with a sudden case of “the fits” – a seizure-like experience that spooks the entire community and makes Toni question her desire to join the team. (And thus, grow up.)

There is a stillness in the framing of each shot that gives way to an unexpected movement, making you question if an actual dancer made this film. Visually, the gaze lingers – long shots glide and add a sense of control to the camera’s movement. It’s a celebration of the purity and strength inherent in a little black girl’s body. In a society where black girls are over-policed and over-sexualized, it’s refreshing to watch this group of young, competitive dancers revel in shaking their hips aggressively and throwing their bodies around. I really love the literalness of this film. It shows us physical aspects involved in the evolution of girlhood instead of telling us.

In the beginning, Toni is in the boxing gym with her older brother doing pull-ups and practicing throwing punches. The coloring is tinted with grey, and the lines of the boxing ring reinforce the singularity of boyhood. But occasionally, Toni escapes the angular boys club and peeks through the window into the girls’ chaotic world. Her small hands hold her up against the door, and when she takes them off, we see glitter on her fingertips. Hair is flying as young girls dance-battle each other. Toni is as captivated as the audience. Obviously, it’s a girls’ world in the reality Holmer creates, and the allure of girlhood is too much for the young – and, up until now, genderless – Toni to resist.

Throughout the film, little black girls jump and shake and clap and flip, casually, as they prepare for their big competition. And Toni goes from passive to active, starting out as a spectator and eventually joining the team. Toni goes from being seen as a little boy, essentially, in the boxing ring, to a girl on the Lionesses dance team with pierced ears. And as “the fits” start to affect the team members one by one, she goes from unaffected to begrudgingly affected.

As “the fits” – a strange mania that causes the girls to lose their breath, convulse, and collapse – burns through the dance squad, Toni begins to question her desire to be a Lioness. No one dies from “the fits,” and although the origin of the sickness is unknown, the girls begin to realize it’s unavoidable. Two of Toni’s closest friends suffer “the fits” seemingly days apart, and afterward, behave as if they’re part of some secret society now, leaving Toni on the outside once again. Toni, frustrated with this unavoidable transition, takes out her earrings and retreats back to the boxing gym with her brother. She even tries to shed the markers of girlhood by taking the paint off of her nails, but unfortunately, as every girl faced with puberty will eventually learn, you can’t fight Aunt Flo.

Without giving too much of the story away, Toni eventually suffers “the fits,” and it is a sight to see. Magical surrealism is implemented beautifully here and we finally get to see her perform the routine she’s been practicing. As she comes down and collapses onto the floor, the team catches her right before she lands, and she looks up and smiles into the camera. A smile that, upon watching the film a second time, makes me wonder if Toni faked her bout of “the fits” to belong. Which, if so, is also a very real part of becoming a girl and joining a group.

I love this film because as a little black girl who danced, I can remember how powerful I felt when learning or performing a routine with other girls. As a filmmaker, I see the connection between the two art forms. Holmer’s empathy for dancers and black women is so strong that I was expecting a black dancer to have directed this film. That’s how accurate the gaze is. When I think of physical strength and black girls, many ideas and tropes come up. Serena Williams and her career-long fight for her femininity comes to mind. I really love that we now have this film to add to the canon, because it does what many people believe isn’t possible – it displays the inherent strength in femininity and the innocence in black girlhood. Kudos to Anna Rose Holmer for being able to find softness in the chaos of the fierce world of competitive dance, and highlight it through her lens.