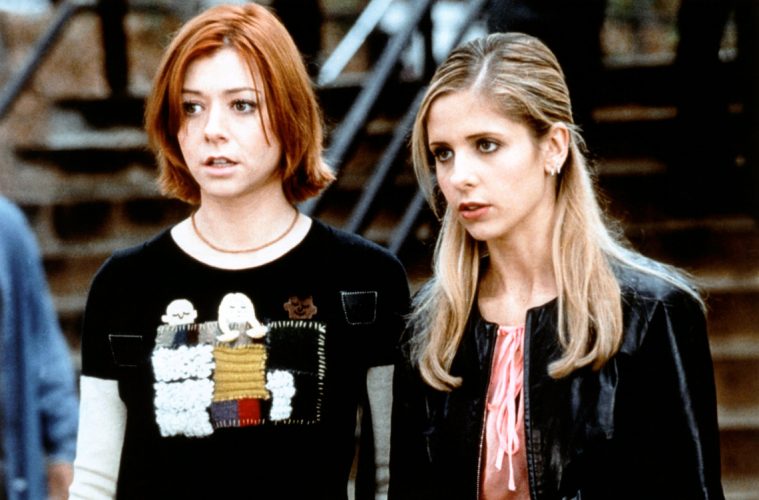 “In Every Generation, There Is a Chosen One”: Why Buffy Still Slays After All This Time

It’s been more than 20 years since Buffy the Vampire Slayer, the beloved supernatural series, premiered. In that time, volumes have been written about the titular heroine and her world-saving crew, just as many volumes have been written about the show’s impact culturally, artistically, and even politically. It’s hard, after all these years, to say anything about Buffy that hasn’t been said before, and better. It’s also hard to ignore the ways that the show doesn’t hold up, especially with changing views of the show’s creator and another recent slew of think pieces, this time questioning whether the show is really as feminist as we’ve always applauded it for being.

But new Buffy news has hit the internet lately, this time in the form of a new Slayer-focused series hitting the airwaves sometime next year. We’re told it won’t be Buffy this time, but another girl tasked with protecting the world from the forces of evil — perhaps one of the Potentials activated in the series’ original run, but more likely a completely fresh face. And now, it’s time to reevaluate: Why does Buffy remain a perennial favorite among fans (and myself)?

I was in college the first time that slashing guitar-filled intro hit my screen. It was about five years ago, many years since the show’s 1997 premiere and many years into the show’s status as a cult favorite. I’d heard a lot about it — it’s hard not to — but it exceeded my expectations in every way. The show had everything I wanted: vampires, retro goth vibes, 1990s fashion, and a lovable band of misfits.

But it also had a title character who managed to be both stylish and serious, likeable and lethal. She wasn’t a “damsel in distress” by any means, but she wasn’t an emotionless creature of destruction either. She was a girl, with exceptional powers and a weighty responsibility. She had family and friends and insecurities, but she was effective and used her strengths to her advantage. She was everything I wanted to be, and unlike so many leading ladies on TV, she was realistic enough to set an attainable goal, in spite of her enhanced Slayer abilities. I saw myself in her, the good and the bad, and although sometimes that made the show hard to watch, it also endeared it to me — and to many others.

The show’s most effective episodes focused on what Buffy was feeling. “Hush” was the biggest departure from the show’s normal witty banter, but found its footing in the silent fear Buffy and her friends endured. “The Body,” widely referred to as one of the greatest explorations of grief ever put to the small screen, puts us in Buffy’s shoes as she tries to navigate through the early stages of life after death of a loved one. And on that note, “Once More With Feeling,” while overall one of the better musical episodes ever made, has its most poignant moment when Buffy finally confesses, through song, the difficulty she’s having adjusting to life after her own resurrection.

If all those feelings seem dark, it’s because they are. In spite of an abundance of jokes and more than a few comic relief characters (looking at you, Xander), the show was never afraid to delve into the darker side of life as the Slayer — and, by extension, life as a human. Yes, Buffy was able to kill demons and monsters and more vampires than we can count, but she also faced suicidal classmates, sexual assault, and her own depression. High-kicks and wooden stakes couldn’t solve every problem, and sometimes it was excruciating to watch our heroine struggle.

But then, it wasn’t always a struggle. That angsty, vampiric love triangle, with bleach-blonde punk Spike and broody Angel, also explored the kinds of relationships we have as young adults. And speaking of relationships, Buffy at her best was a Buffy surrounded by the likes of Willow, Xander, Tara, Oz, Cordelia, and yes, even Dawn. Through it all, her relationship with father figure/mentor/Watcher Giles provided a thread of love and support throughout all of her trials, highlighting the importance of a mentor.

There are still people in my life who have never watched Buffy the Vampire Slayer. They often ask, “What is it that makes that show so popular?” The answer is that it’s not just any one thing. The beauty of the show is that it’s so full — of feeling, and friendship, and fighting. But also of humor, leather pants, 1990s references. It’s complicated and messy, just like its heroine, but like her, the show won’t go down without a fight. And for that, it will always remain a favorite.