How Clarice Starling Created and Complicated My True Crime Obsession

Early on in Jonathan Demme’s 1991 horror masterpiece, The Silence of the Lambs, our heroine, FBI trainee Clarice Starling (Jodie Foster), finds herself in the Behavioural Science Unit. She looks at a board chronicling the crimes of an unidentified serial killer who has been dubbed ‘Buffalo Bill’ because he skins and mutilates the young women he murders. Among the photos of victims, there’s a newspaper clipping with the headline, “BILL SKINS FIFTH.”

Late in the film, Clarice comes across the same clipping, this time in the home of ‘Buffalo Bill’ himself, Jame Gumb (Ted Levine). In one context, the clipping is a piece of media coverage that one would need to be aware of during the investigation. In another, it’s a trophy, a badge of pride; an opportunity for Gumb to revel in his brutality and the FBI’s failure to apprehend him.

With this clipping, Demme succinctly gets to the heart of what it means to be obsessed with true crime. It’s worth noting that this obsession isn’t new — from Dante to Nancy Grace, people have always displayed an interest in death, crime, punishment, and all things macabre. But, as any quick Google search will surely inform you, the last few years have seen true crime move to the forefront of popular culture. Between podcasts, online forums, binge-worthy Netflix series, and good old-fashioned books, finding the next mysterious rabbit hole to fall down has never been easier. The creators and consumers of true crime content are also, more often than not, women.

This means that over two decades after Silence’s release, at a time when more and more women are becoming fascinated by true crime and sharing this interest with each other, the headline “BILL SKINS FIFTH” can easily stir up feelings of intrigue and repulsion that hit especially close to home for female viewers. Like Clarice and the FBI agents in the beginning of the film, the true crime junkie that lurks within us all is no doubt drawn in by the gruesome description used to peddle newspapers and tabloid magazines. We hear about a crime and we want justice. The worse the crime, the more righteous our desire for punishment.

When this headline is re-contextualized as a trophy later in the film, it’s difficult to not feel at least slightly uncomfortable about it. It emphasizes just how dehumanizing the language around crime is. ‘Bill’ is given a name, even if it is only a nickname. His victim is merely a number. Gumb, as we have come to learn at this point, is skinning his female victims to make a suit of skin to wear. The women he butchers are not people to him; they are a means to an end. When coverage of his crimes further dehumanizes his victims, it conceivably further enables his beliefs.

This dichotomy between fascination and revulsion that Demme creates speaks to an ongoing negotiation that I and many true crime fans are all too familiar with. We are interested in crime and seek to learn more about notorious cases and infamous killers, but all the while are made aware that women are more likely to be victims and that we ourselves must be aware of the potential threats that surround us in this world.

Although the murderer whom Clarice investigates is fictional, ‘Buffalo Bill’ is an amalgamation of several real serial killers, including Ted Bundy, Ed Gein, and Edmund Kemper. This connection to the world of true crime is one of the reasons that Silence continues to draw viewers into its web of mysteries — it feels like the story could, or did, or maybe will, actually happen.

With the help of Anthony Hopkins’s career-best performance as Dr. Hannibal Lecter, Demme also creates an allure around the killer. Clarice visits ‘Hannibal the Cannibal,’ a genius and former psychiatrist who is imprisoned for the rest of his life after being convicted of murdering and eating his victims. Her job is to convince Lecter to profile ‘Bill’ because he understands the criminal mind like no one else.

Although Hopkins is only in a few scenes and has roughly 16 minutes of screen-time in total, there is no question that he leaves an impression on Clarice. He also leaves an impression on the audience — after all, Hopkins won an Oscar for the role, and Lecter ranks number one on AFI’s list of cinematic villains. Like Clarice, we the audience are inevitably intrigued by Lecter, a man who is both charming and polite as well as homicidal and lacking remorse. It’s human nature to want to understand that which is alien to us, and to anyone who isn’t a psychopathic murderer, what could be more beguiling than someone like Dr. Hannibal Lecter?

But as much as Demme creates an allure around Lecter and the investigation of ‘Buffalo Bill,’ helping us understand Clarice’s drive and desire to be in a career where she is surrounded by violence, this allure never turns into glorification of the violence. Silence is firmly grounded in Clarice’s perspective, and as a result, it is her experiences with crime and violence that resonate. 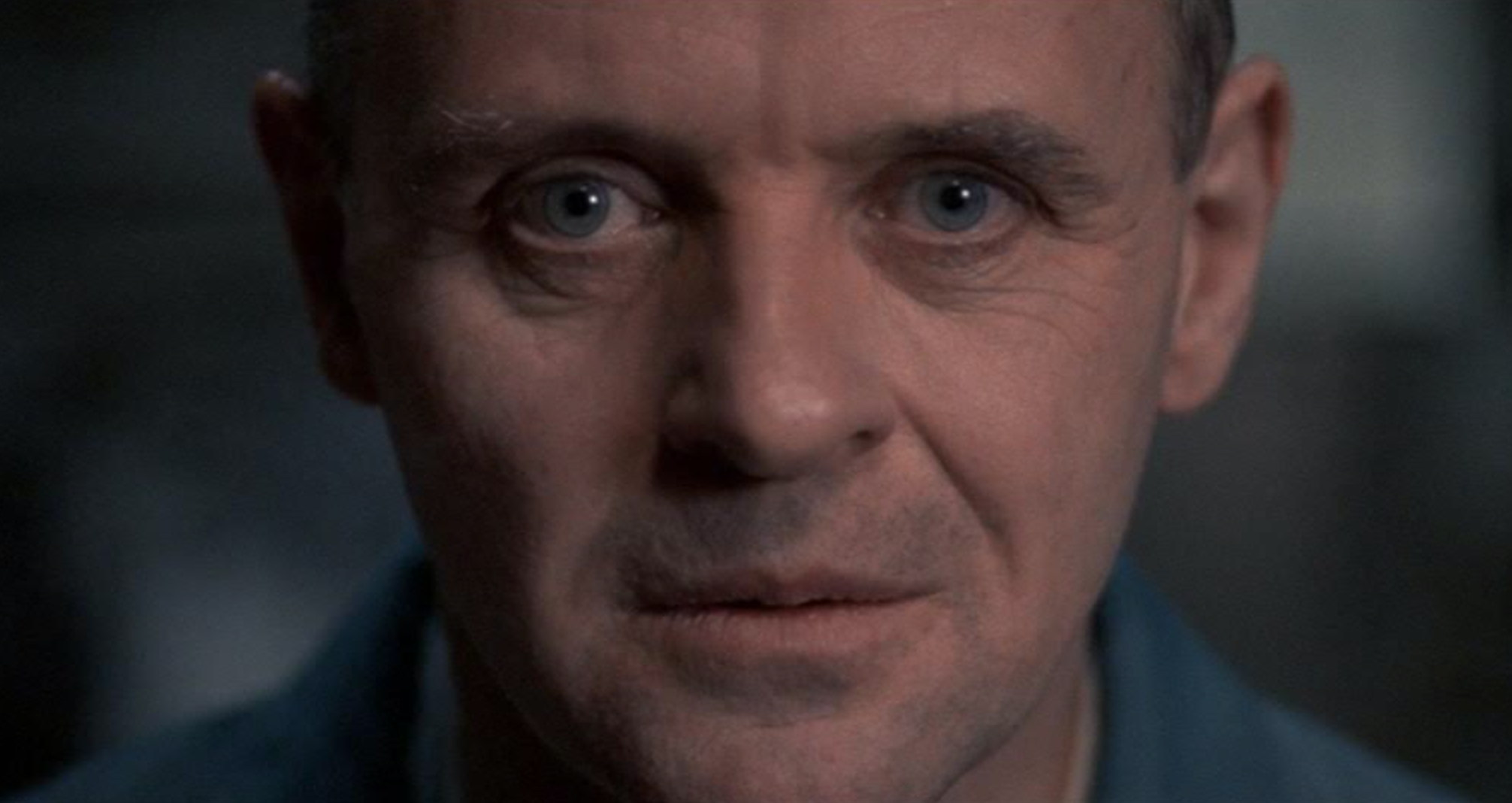 Demme famously breaks the fourth wall in Silence by having multiple male characters look directly at the camera. When Clarice is also shot head-on in a similar manner, Foster doesn’t look in the camera but instead looks just off to the side. Seeing a character look into the camera is a distancing effect and is done to make us uncomfortable. When this occurs, as it often does in scenes with Clarice, it makes her discomfort all the more palpable because we, too, feel uneasy or even frightened.

This technique is most notably employed in scenes with Lecter, but it’s also used when Clarice is speaking with other characters. When she meets FBI director Jack Crawford (Scott Glenn), a man who, for all intents and purposes, is one of the good guys, he also looks directly into the camera lens. Crawford is not a threat to Clarice the way that Gumb or Lecter is, but during their investigation, he does frequently undermine her ability as an agent. By initially positioning Crawford in a way that makes the viewer uncomfortable, it communicates that even though he and Clarice are on the same side, she still struggles in her workplace and is made to feel uncomfortable and singled out as a woman. 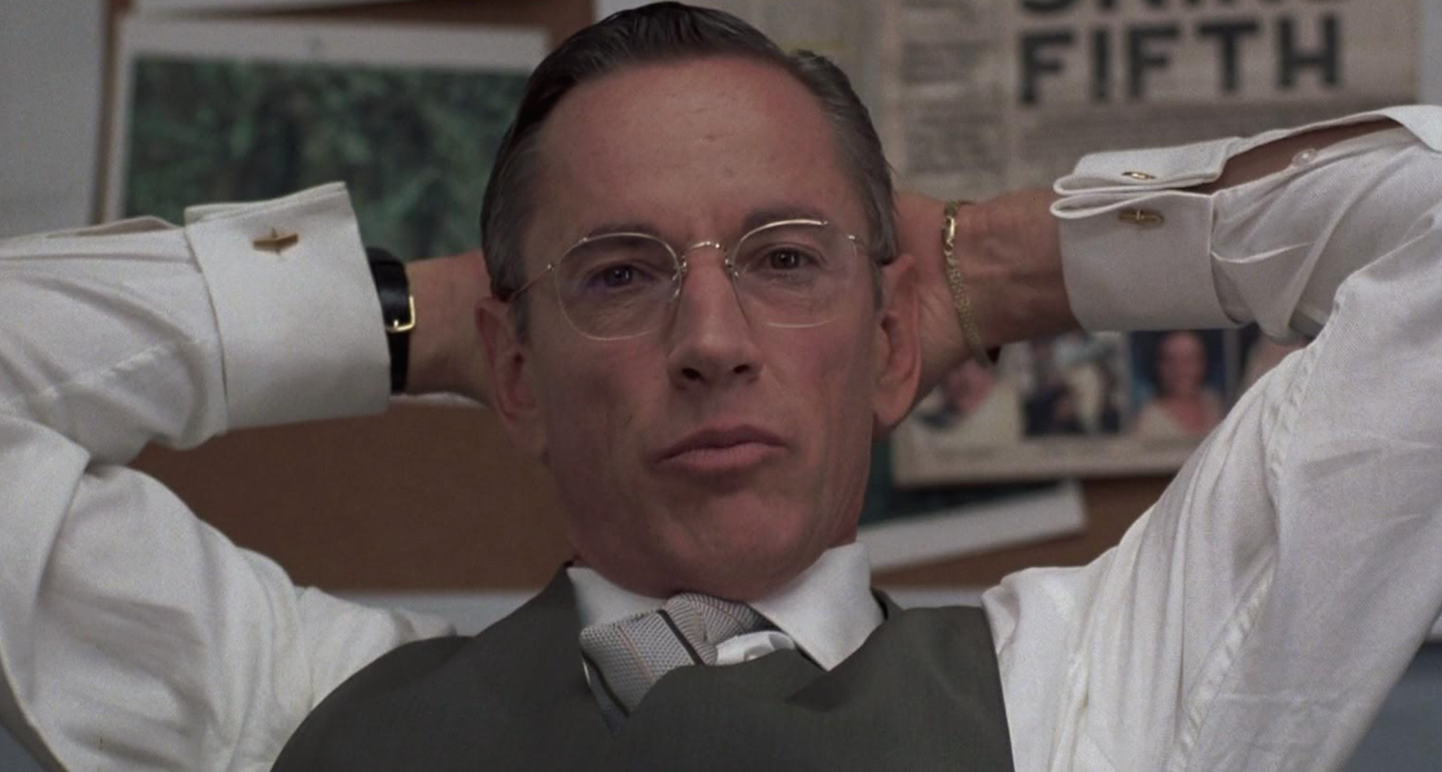 Upon rewatching Silence recently, I was reminded of a passage from I’ll Be Gone In The Dark, a true crime novel from the late Michelle McNamara about the Golden State Killer, a notorious serial killer who was captured earlier this year. In the book, she describes watching a scene from the 1954 film, Creature From the Black Lagoon, in which a female character swims through the water unaware of her proximity to the Creature that lurks just beneath the surface. McNamara describes how this scene reminded her of her own investigation of the GSK and the way he stalked his potential victims: “That means that women exist who, because of change of schedule, or luck, were never victims, but like the Creature’s shapely object of obsession treading in the lagoon, they felt something terrifying brush against them.”

In Silence’s climax, Clarice has found herself in Gumb’s home where he has cut the lights in the basement, leaving her to struggle in pitch black while he observes her through night vision goggles. While Clarice is unaware of his proximity, Gumb is close enough to touch her, and he almost does before pulling his hand away. One could propose theories as to why Gumb refrains from killing her when first given the opportunity — perhaps he liked watching her struggle through the room helplessly, maybe he enjoyed the chase too much to end it quickly — but the point is that Clarice, like so many women, felt something terrifying brush against her.

What Demme so brilliantly articulates in this scene is that Clarice — strong, capable, and intelligent Clarice — isn’t superhuman. Even with all of her training and quick thinking, she’s not infallible. When she comes close to being a victim of Gumb, part of what saves her is luck. Demme utilizes our identification with Clarice to remind us that women face an ongoing threat of violence no matter how much they are aware of potential dangers in their surroundings.

As someone who is obsessed with true crime, I can attest that I often find myself justifying my interest by saying that I feel safer with this knowledge. The more I understand crime, the better equipped I am to protect myself from it. But this isn’t always the case. Strong, capable, and intelligent women can become victims, and if they are not victimized, it’s sometimes just a matter of luck. This message juxtaposes the connotation of the ‘BILL SKINS FIFTH’ newspaper clipping seen in the film. While media coverage often dehumanizes victims, Demme reminds us that these women were smart and strong, and that they deserve to be remembered for more than the violence done to them in their final moments.

I first fell in love with Silence because of Clarice. I continue to love and admire her as one of cinema’s greatest heroines. Over the years, my appreciation of the film has deepened the more I notice new details on each rewatch that enrich my reading of the film. Small pieces of information, such as the newspaper clipping, could have been insignificant. Instead, the film utilizes this clipping to alert us to how much media coverage of crime overlooks the victims and sensationalizes the killers.

In turn, these details inspire me to be critical of my own relationship to true crime. While it’s easy to be swept up in sensational media coverage of violence, Silence reminds me that it’s difficult but vitally necessary to listen to and understand victims without exploiting their trauma or dehumanizing them and that if I’m not conscious of this, I can end up supporting the kind of true crime news coverage that I oppose. This is the reason I believe the film is an unrivaled masterpiece — even when watching it for the umpteenth time, I continue to be challenged by it.

At the end of The Silence of the Lambs, after Lecter has escaped, he calls Clarice and tells her she need not worry about him coming after her because, as he states, “the world’s more interesting with you in it.” I try to not make a habit out of aligning myself with a man who could tear someone’s face in half without so much as batting an eye, but I have to say that Lecter has a point. The world is more interesting with Clarice in it. At least, mine is.