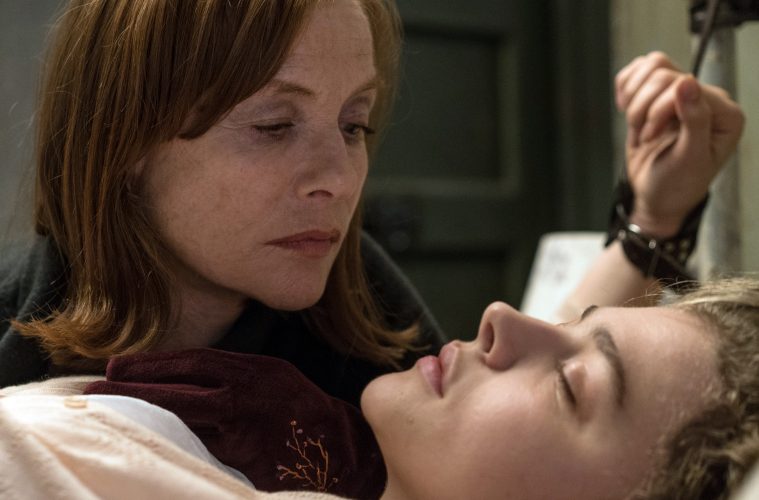 Isabelle Huppert is known and celebrated for playing incredibly complex and unhinged characters, and her latest turn as Greta Hideg is no exception. But what Neil Jordan’s Greta does is allow the re-emergence of a subgenre of horror that was popular in the 1960s and 1970s, with its titular character embodying all of this classic form of horror’s camp aesthetics.

Psycho-biddy, also known as Grande Dame Guignol or hagsploitation, is a kind of horror/thriller that offers the audience a new kind of antagonist—an unstable and psychotic older woman, who, according to authors Martin F. Norden and Robert E. Weir, “commits increasingly desperate and aggressive acts to maintain control of her life.” This subgenre first emerged with the rise of psychological horror in the 1960s, namely with Robert Aldrich’s What Ever Happened to Baby Jane? This new trend of horror grew out of the sexism of the time in which it thrived. Legendary Hollywood stars were cast in the role of an unglamorous older woman on the brink of insanity, who terrorizes those around her simply due to their age. These women found their fame diminishing, as they saw all of the best roles in Hollywood being reserved for young starlets. Author Peter Shelley writes that this resulted in women of a certain age becoming nothing more than “the terrorized dame in horror films.”

Now, this isn’t to say that Huppert was put in this role for the same reason. Yes, there is a lot of discourse surrounding the fact that there are still few good roles for women of a certain age in Hollywood; however, Huppert’s career is primarily a European one and she’s not on the brink of having to settle for supporting roles, work in television, or retire altogether—as was the reality for female stars in the 1960s—because no one wants to cast her. (She’s made 13 films since 2017 alone. Get those paychecks, girl!)

Unlike past psycho-biddy films, Greta does not reflect the unglamorous view of ageing. On the contrary, Greta Hideg is just as elegant and chic as she is dangerous and insane. Greta is a refined, lonely French widow living in New York City. In a desperate attempt to soothe her loneliness, she leaves her purse behind on the subway in the hope that a young woman will return it to her, as Frances (Chloe Grace Moretz) does. The pair quickly strike up an unlikely friendship, which is bound by their search for a familial bond that they both have lost: For Greta, her daughter; and for Frances, her mother. Greta quickly makes Frances feel comfortable in her home, as she plays the piano for her and teaches her how to cook recipes from back home, but it soon becomes clear to Frances that Greta’s intentions may be much more sinister. It’s the characters that define psycho-biddy horror, and as all films of the genre do, Greta provides an insight into the psyche and complexity of female relationships.

Frances’s discovery of Greta’s manipulation, and the resulting decision to cut Greta out of her life, sends the film into what author Justyna Stepien would refer to as the “unrestrained kitsch, merging chaos, terror and perversely understood fun” that psycho-biddies are known for. In one respect, Frances is living through a horror film, as Greta begins to stalk her every move. She comes into the restaurant where Frances works yelling, “I deserve better!” and proceeds to throw a wine filled glass on the floor. But on the other hand, Greta is living through a dark comedy. Just like how Baby Jane reacts with laughter to her sister Blanche’s horror upon discovering a dead rat in her dinner tray, Greta gets a thrill out of torturing Frances. The leads go head-to-head and the audience is fed both shocking and comical twists of action. As Greta dances with a gun in her hand and takes any hit without flinching, Huppert fully embodies the over-the-top campiness of a Grande Dame Guignol.

Greta has everything that audiences of the 1960s and 1970s expected to see with a film like this; not only in its narrative, but in its presentation. With its poster’s bright colours, bloody Huppert with the top of her head chopped off, and a good tag line, “Everybody needs a friend,” it perfectly nails all the kitschy elements of psycho-biddy. It also reminds us how much more satisfying it is to be frightened by a beautiful woman with a dropper full of poison than a masked man wielding a chainsaw.