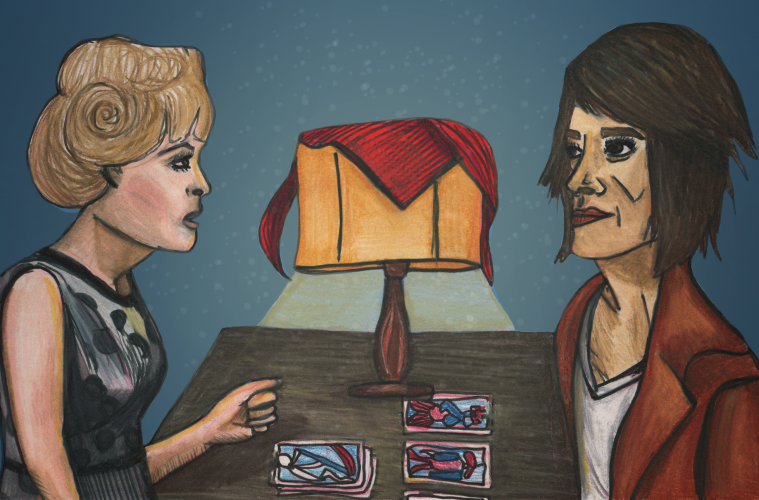 The protagonists of Cléo from 5 to 7 (1962) and Let the Sunshine In (2017) could almost be mother and daughter. Although separated by over fifty years, Agnès Varda’s Cléo (Corrine Marchand) and Claire Denis’s Isabelle (Juliette Binoche) both traverse the streets of Paris, searching for solace against the ceaseless passage of time. Cléo is an ingénue pop singer while Isabelle is a recently-divorced and middle-aged woman, but both experience time as a malignant force. Both films are about 90 minutes long, but while Varda tells Cléo’s story in near real time, time in Denis’s film is vague and slippery.

In her opening scene, Cléo has her tarot read while a clock ticks. She’s waiting for the results of a medical test to determine whether she has cancer. “Here you are,” says the fortune teller as she lays Cléo’s life down on the table, each card revealing some element of her past, present, or future. She draws the Death card. In a tight close-up, Varda shows us the grinning skeleton. The cards are the only element of the film shot in colour; Death’s scythe is a lurid red while Cléo’s distraught face is literally sapped of colour. “The cards spelled death, and I saw cancer. She is doomed,” says the fortune teller after she leaves. Cléo examines herself in a mirror in which her multiple reflections seem to disappear into infinity. “Hold on, pretty butterfly,” she tells herself, “Ugliness is a kind of death. As long as I’m beautiful I’m more alive than others.” It makes sense that Cléo would romanticise herself as a beautiful but fragile butterfly. A title informs us that the first chapter has begun, charting only three minutes. But are three minutes an eternity or a heartbeat to a woman who might be dying?

As the evening of the longest day passes, Cléo wrestles with her own mortality and is forced to come of age. Initially, she performs the role of victim with adolescent, melodramatic aplomb. She bursts into wailing sobs and her maid, Angèle (Dominique Davray), blows her nose for her. “She needs to be looked after. She is a child,” Angèle tuts. Cléo is briefly distracted from her misery by trying on a series of elegant, theatrical hats in a shop. But she is most drawn to a black winter hat, a warning of cold weather to come. Back at her apartment, she changes into a white dress adorned with feathers and reclines on a four-poster bed, gazing into a hand mirror. Like a princess holding court, she is visited first by her lover, then by a lyricist and pianist, who all simultaneously worship and patronise her. As she sings the heartrending “Sans Toi,” her eyes fill with tears. She seems to awaken from her own artifice and flies into a rage: “Either I’m a child or a china doll!” She changes into a simple black dress, tears off her perfectly-curled wig and dons her black hat. It’s both an act of rebellion and a step towards maturity.

Death punctures every attempt at distraction over her two hours in limbo. The chapters remind us that the clock is ticking while she witnesses a street entertainer who is swallowing live frogs and a compact mirror that is broken. She also has a flirtatious encounter with a soldier set to return to the Algerian War the next day. “So little time left,” she says, but she might as well be referring to herself. Cléo’s doctor eventually reassures her that a month of radiation treatment should restore her health, but she is already fundamentally transformed. It’s as if two hours have aged her by ten years. In the final moments of the film, as she walks alongside the soldier, a church bell rings twice. Is it signalling a wedding, a funeral, or those two hours that have passed? Death is inescapable, but in drawing the Death card and confronting her own mortality, she has left her performative, childish self behind.

If time feels like a slow march for Cléo, it seems to rush away from Isabelle like water in cupped hands. Denis jumps abruptly from one short scene to another; sometimes minutes seem to have passed, sometimes hours, sometimes an indeterminate number of days. Moments of emotional and physical intimacy that Isabelle craves are consistently interrupted and undermined by disappointment and mundanity. In the opening shot of the film, a nude Isabelle lies on a bed, gazing at the ceiling. Suddenly, she’s having sex with her lover, urgently but dispassionately; and then suddenly, he’s buttoned his shirt and gone. She lies back on the bed again. It’s over almost as soon as it’s begun.

Like Cléo, Isabelle seems to be performing the role of a younger, carefree woman. She is the mistress of a banker, who casually tells her over a drink that he’ll never leave his wife. An instrumental version of Etta James’s “At Last” plays; Denis seemingly mocks the singer’s promise that her “lonely days are over.” Isabelle returns to her apartment and collapses on the sofa in tears. Suddenly, the sunset comes creeping through the window, and it’s unclear whether she’s been lying there for minutes or hours. She soon meets a much younger man, with whom she is quickly besotted. When he beckons her into the bedroom for the first time, he disappears out of frame while she lingers on the threshold. The camera tilts down to her knee-high black boots as she takes two slow, deliberate steps into the bedroom. Denis allows her a moment to savour the anticipation and joy of being in love, but the next morning he says he regrets sleeping with her. Cléo fears death quite explicitly, but for Isabelle, a lack of romantic love is a kind of death, and she’s running out of time to find it. “It’s like my love life is behind me, it’s all over, there’s nothing left,” she cries.

In perhaps the most memorable scene in the film, Isabelle dances to “At Last” in a nightclub. She is alone at first, swaying to the music with her eyes closed, but out of the shadows emerges a tall, dark-haired stranger. They hold each other close, gazing into each other’s eyes as if they’ve known each other for eternity. It’s a swooningly romantic sequence and one of few that Denis lets us revel in in real time. We don’t get to see their relationship blossom, only a bitter argument some unspecified time later that prompts them to separate—but for a minute or two, Isabelle’s fantasy is indulged.

While Cléo’s story begins with a visit to a fortune teller, Isabelle’s ends with one. David (Gérard Depardieu) does a “reading” of Isabelle in the film’s longest scene. She doesn’t draw an omen of death like Cléo does, but there’s still a sense that she might be doomed to the fate that she fears: being alone. He reassures her that one of her lovers will return to her only to disappoint her: “Is he your future with whom you’ll walk down the great road of life? No, I don’t think so.” He advises only that a new, “authentic” man may come into her life—maybe suggesting himself—and that Isabelle must remain “open.” But he does encourage her to find the “beautiful sun within” that lends the film its title.

Both films are directed by women and tell fragmented stories about Parisian women searching for their own identities. For Cléo, each second is agonising while she waits for the results of the test, while for Isabelle, searching for romantic fulfilment post-divorce, there is dread in the days that seem to vanish before her. But in the final moments of both films, Isabelle and Cléo seem to find some semblance of fulfilment, even as their futures are uncertain. “I’ve the feeling my fear is gone, I’ve the feeling I’m happy,” says Cléo, while Isabelle smiles through her tears.