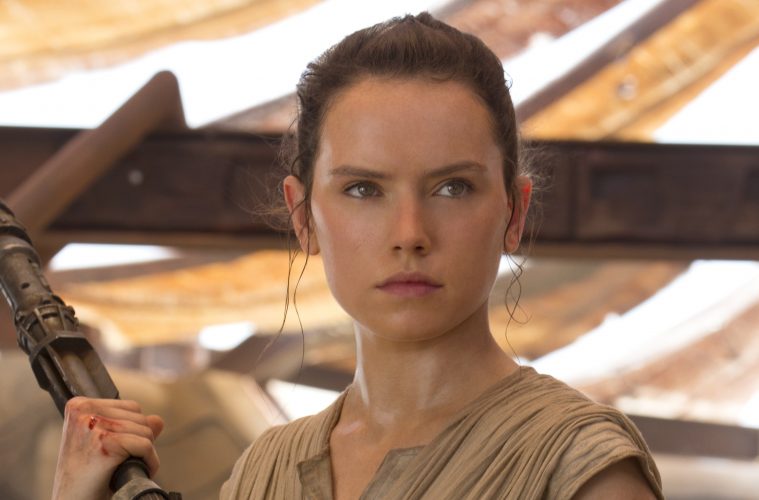 Star Girl: Why Rey from ‘The Force Awakens’ is My Hero

I was five years old when Star Wars first came barreling into my life. The year was 1999, and everywhere you went, there were ads and products for Star Wars Episode One: The Phantom Menace. I shunned these at first. Star Wars, after all, was for boys, and therefore not for me. I didn’t want anything to do with a strange series involving glowing swords and evil masked villains.

And then, one fall evening, my dad told me that Star Wars was on TV and we were going to watch it. That’s when the course of my life changed irrevocably.

Star Wars shaped me in ways I’m still identifying. I vividly remember wearing out my VHS of A New Hope, re-watching the scene where Luke broods as the twin suns of Tatooine set in the distance. There were making-of featurettes before each film, and those helped shape my love of filmmaking; by the time I was seven, I could identify where green screen was being used. Though my love would be put on the back-burner for a while in between 2005’s Revenge of the Sith and 2015’s The Force Awakens, it never died out. I loved Star Wars. It was in my very soul, to quote Anakin Skywalker’s terrible romancing.

And then 2015 happened, kick-starting a movement that made me feel like a child again. Star Wars came back, and it was not just for boys anymore. There’s Jyn Erso, Ahsoka Tano, Sabine Wren, and Hera Syndulla. There’s Forces of Destiny and the tie-in dolls. There are books on Princess Leia, now General Organa. But at the heart of all of this, at the very beating center of this new wave of Star Wars-themed girl power, is one simple scavenger: Daisy Ridley’s Rey.

I can still remember watching The Force Awakens for the first time. Kylo Ren had defeated Finn. Hope seemed lost. He reached out to pull the Skywalker lightsaber into his own hand, but it soared past him instead. Right into the waiting hand of Rey, the plucky heroine of it all. It turns out that the Force had not only awakened in Finn, but in her as well. She was a Jedi, not just a damsel in distress. And in that moment, as John Williams’s score swelled, I started to cry tears of joy.

Rey is a wonderful character for many reasons. A scavenger on the desert junk world of Jakku, Rey is drawn into a galaxy-wide conflict; first when she meets BB-8, a lovable droid, and then Finn, a defecting stormtrooper. Over the course of their adventure to deliver a map to Luke Skywalker and the Resistance — an adventure that sees them teaming up with an older Han Solo — Rey discovers that her mysterious past points to a connection to the Force. And then, during that final lightsaber fight, this is clarified. She is the face of the Force for this new generation. And what a face she is.

Spunky, compassionate yet tough, childlike in her wonder and ferocious in her rage, Rey also defies what it means to be a female hero in a genre film. Too often, female heroes are defined by some sort of gendered trauma in their pasts. They’re dressed in revealing clothes, or they’re in some way defined by their gender. But Rey, in her practical desert garb, is never subjected to particularly gendered trauma. She is not punished for being a woman who dares to be a hero. Instead, she’s a “Chosen One” figure who simply happens to be a woman.

Within a genre, it’s all too easy to define women by their gender in some way (I’m looking at you, Joss Whedon, father of fake geek feminism). But Rey doesn’t fall into those tropes. Instead she’s allowed to be a hero completely outside of the realm of gender. No one questions her because she’s a girl. They’re shocked that a scavenger with no training has the talents to beat evil, but the fact that she’s a girl barely registers with them. It’s all about her skills and merits.

Rey is even a groundbreaking figure in that she’s changing the way toys are being sold. Everyone remembers the backlash of #WheresRey following the release of The Force Awakens merchandise. People were clamoring for Rey merchandise, uninterested in the plentiful merch there was for Kylo Ren. With the release of the merchandise for the upcoming The Last Jedi, there’s a bounty of Rey merch. A quick scan of t-shirts, toys, and other gear shows that she’s the most prominent character there.

I identify with Rey, with her hopefulness and her frustration and the fact that our belongings are not behind us but ahead. But it’s also important to note that while I have Rey, heroines are few and far between for women of color. And that’s why I want to end this by talking about the other female character whose merch I was desperate to grab on Force Friday: Rose Tico, played by Kelly Marie Tran.

At D23, dressed in a makeshift modern Rey outfit and talking to the director of Looking for Leia, a documentary on Star Wars fangirls, I met the first Rose Tico cosplayer, Laura. We talked excitedly about representation and how important Rose is, how important Rey is, and how important all the representation in Star Wars is. Rey and Rose matter. So does Finn, perhaps even more so than Rey does. Poe matters. Cassian Andor and Bodhi Rook and all these new characters who aren’t straight white males matter, because Star Wars matters. Representation is important when you’re talking about the biggest franchise of all time.

As I sat in line for Force Friday, I struck up several conversations with the male fans in line with me. I told them that I only wanted to get merchandise with female characters on it. I expected derision; I got high fives and statements that I was awesome. And when I was able to run into the merchandise area, I instantly snatched up a Rey action figure, then a Rose one. A sweater with Leia on it. A book about Captain Phasma. A blanket with all the female leads on it. This merch wasn’t token stuff for me that featured a gold bikini, but rather sought-after merchandise that fans of all ages wanted to get their hands on. The little girl who thought Star Wars was for boys had a long wait to go, but the franchise finally caught up to her. Now, it’s time for them to catch up to other fans.