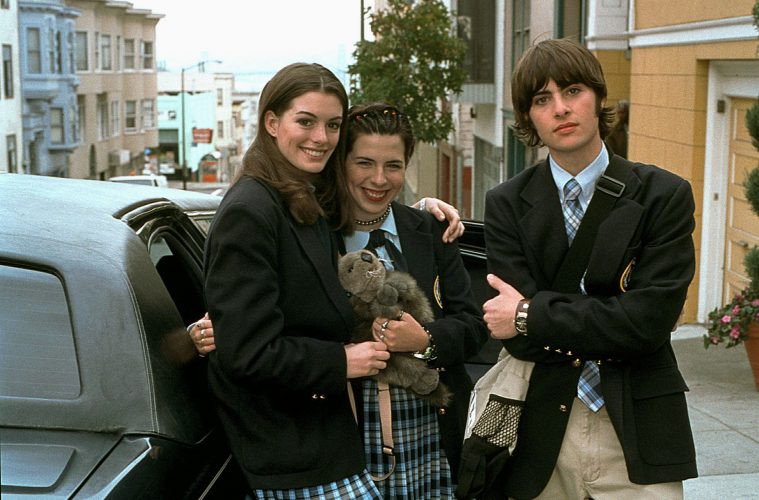 ‘The Princess Diaries’ and Life in Perpetual Forward Motion

Towards the end of 2001’s The Princess Diaries, Mia Thermopolis (Anne Hathaway) reads a letter from her late father. He explains — knowing he’s going to die, that he will never have time to share these insights in person — that “from now on [she’ll] be traveling the world between who [she thinks she is] and who [she] can be. The key is to allow [herself] to make the journey”. His words crystallize the themes that have been swirling around the film, which begins with a royal motorcade cresting a hill and ends with a descending plane. Each of us is always moving onward, whether we want to or not, and the trick is not necessarily to enjoy the ride but merely to realize we’re on it.

The movie’s San Francisco setting emphasizes this sense of nonstop movement, the famous hills of the city’s streets a perpetual visual reminder of the journey each of its characters is undertaking. Most scenes in this film, too, involve some sort of kinetic motion. Mia lives in a converted San Francisco fire hall with her mother (Caroline Goodall), which means that even the status quo starting-her-day montage includes her descending a fire pole. This relationship is the most consistently supportive in her life, and the two women are often seen in motion; wall-climbing or doing yoga or throwing darts at paint-filled balloons. Mia’s second most important, and more challenging relationship is with her outspoken best friend Lilly (Heather Matarazzo). We first see the pair as they ride electric razor scooters up a San Francisco street, and from then on, they’re either playing basketball, running down sidewalks, or hopping along a set of bleachers.

As in every hero’s journey, Mia doesn’t realize she’s the lead character until she’s already mired in a variety of plotlines in which she’s the crux. In short order, we see her dealing with her crush on preppy goofball Josh (Erik Van Detten), sustaining daily torment at the hands of mean girl Lana (Mandy Moore), and consciously pretending not to notice that Lilly’s brother Michael (Robert Schwartzman) has more-than-friends feelings for her. Oh, and she’s also failing her Debate class, whose teacher her mother has just begun dating. It’s into this existing surplus of drama that she then learns that her recently deceased father was the Crown Prince of a small European country called Genovia. Her parents agreed to keep her pedigree a secret until her eighteenth birthday, but his early passing means that at age fifteen, she must either accept her royal status or abdicate. Which means delving into a new relationship with her heretofore absent grandmother (Julie Andrews). Which means etiquette lessons and a makeover montage.

“I’m a princess? Shut up”, she gasps, upon receiving the news that simultaneously upends her life and means that she’s been lied to for fifteen years. She’s in the midst of an all-too-familiar teenage navel-gazing phase, tending to define herself to others. She is still unsure about who she is, but quite firm in her ideas of who she is not. In fact, even prior to her momentous first meeting with her grandmother, we’ve watched Mia struggle to define herself on her own terms. The teenage act of finding yourself is a way to try on identities until you find one that fits you, and there are hints that Mia had been outgrowing her role as Lilly’s sidekick even before she becomes a princess. Lilly’s post-makeover anger is clearly fuelled by both jealousy and fear that Mia — now beautiful — will abandon her, and we see her fears are justified as Mia quickly ditches Lilly and her brother for Josh and the other beautiful people.

And then, inevitably, Josh betrays her for his own gain, leaving Mia devoid of friendship entirely as she faces her low point. This experience, combined with her grandmother more or less firing her from her royal duties, finds Mia first weeping in her mother’s arms, and then running away in the 1966 Mustang convertible she’s been restoring throughout the film. But rather than to lean into this urge to flee, it’s at this point that she discovers her father’s deus ex machina letter, the words from a man who she learns gave her up because he loved Mia and her mother so much, and finally begins to understand what being a princess could truly mean. Our heroine may have just learned what road she’s driving on, but it’s not that she just started the trip — it’s that she’s been peacefully dozing while someone else took the wheel.

After reconciling with Lilly, Mia muses about whether or not to formally accept her royal role. Lilly, who has spent much of the film handing out petitions and raging against patriarchy, is aghast that Mia would even hesitate to embrace this amount of power. As a royal, Mia would have the opportunity to elevate her own voice, as well as to speak up for those who go unheard. It’s a privilege so great that Lilly isn’t even envious about it, but rather marvels at it: “How many teenagers have that power? What more of a miracle do you want?”

It’s Lilly’s words that Mia echoes, in part, during a climactic speech in which she declares her intentions to accept her royal destiny. She is no longer the frizzy-haired, shy girl, folding in on herself to try and disappear. Neither is she the blown-out glamazon her grandmother turned her into. This film was a star-making film for Anne Hathaway, and this speech is her standout moment. She integrates all the different sides of Mia we’ve seen throughout the film, allowing us to see her mature before our eyes. Her extemporaneous speech veers at times into overly casual stridency, but she reigns herself back in and is the epitome of dignity as she declares her choice “to be forevermore… Princess of Genovia”.

Her decision thus made, the film happily moves into its coda — a joyous dance number including nearly all of the film’s characters. Mia has spent the entirety of this film in motion — running and riding and driving, stumbling and getting up again. Here, we see her in a different kind of movement — celebratory, twirling in a circle, finding a place of stillness amid the chaotic journey her life seemed to become.

In the film’s final frames, we find Mia on an airplane, her face radiant with calm. This is a princess story that doesn’t end happily ever after, because we know this is just the beginning of a new story for her. The next chapter of her life will be filled with challenges she can’t even fathom, and while there will surely be happiness, there will also likely be pain, and betrayal, and grief. Like all of our lives, it doesn’t lead to happily ever after so much as to happily onward, a continuation of the hills and roads we all ride. Calling back to her conversation with Lilly, the soundtrack includes the lyrics, “Miracles happen once in a while when you believe”. The miracle here is not that Mia is a princess, of course; it’s that she found the bravery to face her own life head-on, to choose to be the person she is. Those around her found themselves caught up in this unstoppable momentum, adjusting themselves around this new Mia who was always there.