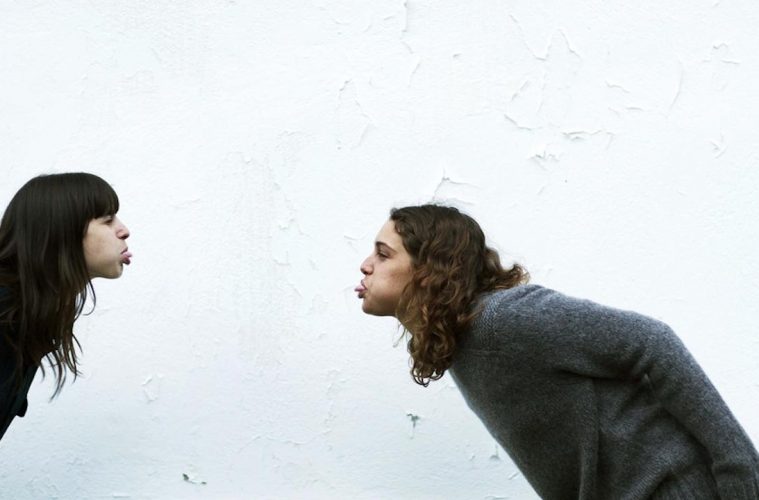 Beginnings and Ends in ‘Attenberg’

Coming out of the ‘Greek Weird Wave’, Athina Rachel Tsangari’s 2010 film Attenberg is a tale of beginnings, ends, firsts, and lasts.

The film follows the story of 23-year-old Marina, who experiences her first dabbles into sexuality as well as tension in her relationship with her best friend – all while her father is living his last days.

Without seeming fake deep, beginnings and ends occur simultaneously. With each conclusion, there is growth and new life. Over the course of the film, Marina’s primary relationships diminish. She has two people in her life: her father, Spyros, and her best friend, Bella. Her relationships with both of them are anything but conventional. The film concludes with her father’s death and subsequent funeral, and simultaneously, her ambiguous relationship with her best friend is replaced with a new sexual relationship. Literal ashes are thereby met with potentially fruitful beginnings.

The film’s opening shots are of Marina and her best friend exchanging extremely sloppy kisses in an extended shot. The awkwardness is palpable, since at several points, Marina tries to pull away. Bella asks Marina if she wants to learn how to kiss or not. Even after Marina says no, the kisses continue. In another scene, after Marina and Bella discuss Marina’s ambiguous sexuality, Bella asks if Marina wants to touch her breasts to see if she is attracted to women. Marina puts her hands firmly on Bella’s breasts and the two have a conversation about their small size. The exploration of sexuality in the film takes this sort of rigid, almost task-oriented approach.

As a spectator, I read Marina as queer and asexual, but the film seems indifferent or ambiguous towards these identity markers. I could identify several moments in the film wherein Marina can be read as asexual, like when she plainly asks her best friend if she is. I could also identify moments where she can be read as queer, like the scene when she sits in the locker room observing women’s nude bodies, or when she plainly tells Bella that she admires the bodies of women.

The film does little to resolve these curiosities. In fact, at the end of the film, after Marina’s father has passed, she goes to the apartment of the man with whom she’s having sex. For Marina, however, this sexual relationship seems more like something she feels she needs to do rather than something she really wants. While sitting in the hospital waiting room, she tells her father that she’s seeing a man. He asks if Marina wants them to meet. She doesn’t, and Marina’s father is confused as to why she would tell him in the first place. He remarks that she has never told him about seeing anyone before. This will be the first and final time.

Marina’s first time having sex is depicted awkwardly and realistically. She goes to the place where her partner is staying, fully undresses and stands in front of him. During the encounter, she asks innumerable questions, and this becomes the standard for every encounter. She asks questions, he answers them, and he tells her she asks too many questions. There is even a moment when he tells her she talks too much. The questions signaled for me an eagerness to learn on Marina’s part. She goes into her first sexual experiences not with unstoppable passion but instead with a calculated interest in learning. And for a keen learner, practice makes perfect. Sex becomes a repetition of acts.

The rigid portrayal of sex in this film is juxtaposed with an extremely odd representation of the characters moving like animals. The film is called Attenberg because of Sir David Attenborough, a well-known British documentarian of wildlife, who Bella incorrectly calls “Attenberg”. Marina is fascinated with nature documentaries. While watching them in one scene with her father, they both begin to jump around and imitate the movements of animals, making noises at each other and moving around the bed nonsensically. As a viewer, I found these odd scenes funny in an otherwise bleak film.

Another segment of the film involves shots of Marina and Bella in identical dresses doing synchronous dances towards the camera. These shots and scenes do not fit organically into the film, and in fact, they sometimes interrupt the narrative. Coming out of Greece’s ‘Weird Wave’, these scenes are nothing if not very weird, but I found them absolutely delightful. The film’s subject matter is heavy, but these interruptions create an atmosphere of serendipity and playfulness that I appreciated.

I now count Attenberg among my favourite films. Delightfully silly, tough, and interesting, I would recommend it to anyone. Attenberg is a film filled with firsts and lasts. Marina’s first sexual experiences and last moments with her father colour the film. With every end, there is a beginning. And with every beginning, an end.