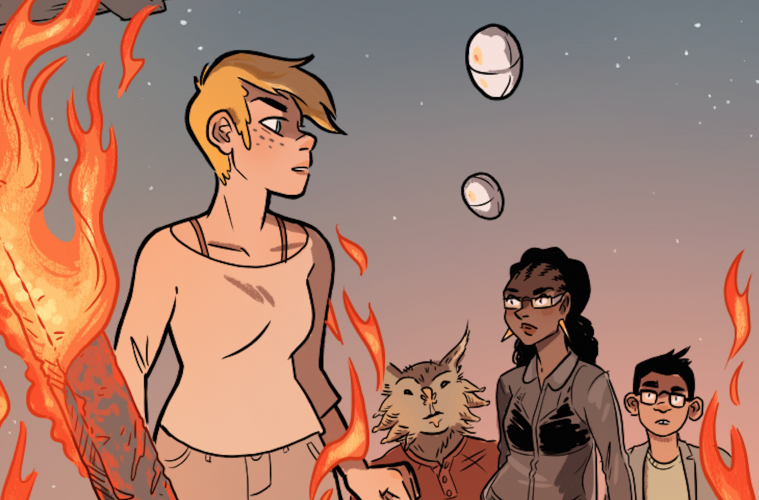 ‘Strong Female Protagonist’ Gives Us a Different Kind of Hero

“There isn’t a Sauron or Voldemort figure of ultimate evil…the world is more confused than that.” I love this quote. It’s from Lev Grossman, the author of the Magicians Trilogy; a dark and twisted narrative that’s Harry Potter meets Chronicles of Narnia.

In many ways, this quote sums up what I am hoping to express with this review. The stories central to our cultural consciousness all too often divide good and evil into neat little binaries. Little Red Riding Hood and the wolf, Harry and Voldemort, Superman and Lex Luthor. Evil and good, forever locked in an epic battle to determine the fate of the world. Yet, despite our fascination with these narratives, the real world is a lot more complicated than simply good/evil.

Case in point: superhero films. While superhero narratives are getting grittier and more complicated (I’m looking at you, Daredevil), the basic superhero blockbuster film still revolves around the basic divide of good/evil. We have a bad guy, and we have a superhero in tights (or maybe some sort of tight armoured outfit that passes for spandex today). The simple worldview these films present can be intoxicating. How nice is it to sit in a theatre and know that the guy with the German accent or the scar is probably the baddie, while the man with the muscles and the winning smile is the hero? It can be such a relief to not consider the complications that real life inevitably provides — to take a step away from the real world and watch the hero punch their way to a solution.

But in some ways, this simple escapism can be dangerous. It might trick us into complacency. Complex and important issues like hunger, racism, famine, global warming, and terrorism do not have one-punch answers. We can fight our way to an epic conclusion — the day saved — in a neat two-hour runtime. Watching these films, we may become disheartened by our own lives. I don’t have super strength, I can’t fly, and I can’t turn green and smash things. I can’t save the world singlehandedly, so why should I try? It can be so easy to fall into these dark thoughts (particularly on Friday nights, when you sit alone at home eating ice cream and contemplating how little you are doing with your life).

Strong Female Protagonist is a webcomic that takes the traditional superhero character and uses her to contemplate the far from simple issues plaguing the world today. Molly Ostertag’s beautiful, expressive illustrations accompany Brennan Lee Mulligan’s incredibly intelligent script to create a comic you need to be reading. Strong Female Protagonist follows Allison Green, a young, middle-class American woman with “super-strength, invincibility and a crippling sense of social injustice”. Allison’s world is like our own, but with one significant change: a small percentage of twenty-somethings have superpowers.

Allison spent much of her teenage years as Mega Girl, part of the superhero fighting team The Guardians. Yet an encounter with her so-called arch nemesis, the mind-reading villain Menace, opens her eyes to the world beyond punching bad guys. He informs her of the many young people killed under mysterious circumstances before science was aware of superheroes – children with abilities like generating energy or talking to diseases, that could have saved the world. These children are gone, and Menace wants to know who killed them. He is ready to stop “playing” supervillain and discover the greater threats at work in the world.

Menace’s speech strikes a chord with Allison, a sharp reminder that violence only begets more violence. As a professor sharply informs her later in the comic, “WITHOUT PEOPLE LIKE YOU, WE WOULDN’T NEED ANY PEOPLE LIKE YOU!” And Allison knows this. Her super strength can’t truly save the world the way it needs to be saved. So, she hangs up her mask and cape, reveals her secret identity to the public, and turns to solving the real social issues of the world. She soon finds, however, that this is much easier said than done.

Strong Female Protagonist doesn’t just acknowledge the good/evil binary I mentioned earlier – it blows it apart, as characters struggle to define what determines good and evil, and whether those distinctions can even be made. The question of how to save the world, or whether the world can even be saved, is another major theme of the comic. Like the reader, Allison feels debilitated sometimes by her desire to save it all, to save everything. She feels lost because that is impossible. The perfect solution to all the world’s problems simply does not exist. As Patrick/Menace puts it: “We want any effort on our part to be the winning effort. We don’t want to be a drop in the bucket. We want to be the entire ocean.”

Strong Female Protagonist is about superheroes, but it’s also about the ethical ramifications of superpowers, social justice, philosophy, and so much more. Allison is not simply a super powered being, but a young woman struggling to find her place in the world. It is quite simply essential reading, and available in print or for free online, with an extensive archive to boot. Overwhelmed by the injustices of the world, Allison still forges on. She provides the reader with a hope that cuts through the apathy generated by the blockbuster superhero film – a reminder that even small actions can be important, no matter how little impact they seem to make. As Allison reflects to her former teammate, Pintsize, “I think the world will always need heroes…I just don’t know if it will always need superheroes”.