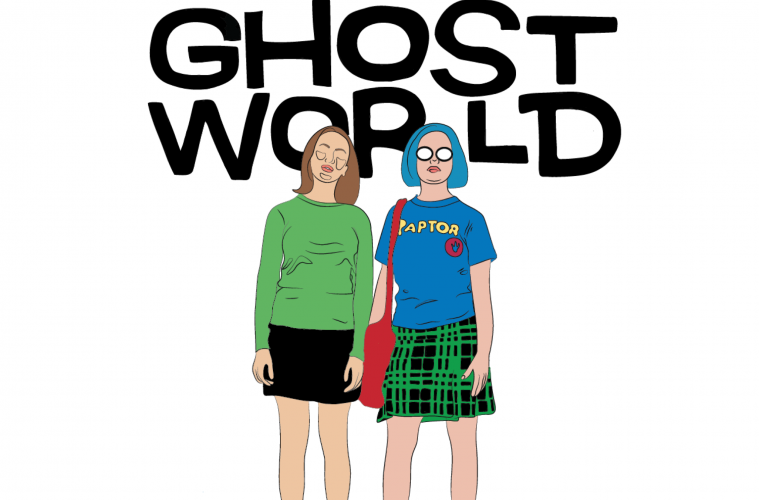 Being a Teenage Girl is Hard: Identity Construction in ‘Ghost World’

Ghost World’s opening credits are scored by a 1965 Indian rock and roll song, “Jaan Pehechan Ho”. It’s an electric song I showed to my friends in high school, trying to take credit for its discovery.

I first watched Ghost World five years ago. It was the summer before I went into my final year of high school. When I write about my adolescence, which feels both alien and close-by, I feel as though I’m reflecting on fire. I can’t grasp it entirely. It wasn’t so much any one event, but a larger feeling of inexplicable anger and boredom.

The film follows Enid, played by post-American Beauty Thora Birch, and Rebecca, played by pre-Lost in Translation Scarlett Johansson. Two snarky and often awkward best friends in the summer following their high school graduation. They love to profess their adoration for the obscure, creepy, and weird. They love following people around. They love to project metaphors onto other people’s lives, often without thinking about the consequences.

Ghost World originated from the 1997 graphic novel of the same name by Daniel Clowes. Both the film and comic feel entirely unique to audiences, yet each has a huge cult following. The notion of loneliness therefore extends far beyond the frame of Clowes’s picturesque town and its thoroughly disappointed protagonists.

So much of the language of Ghost World is referential. By folding in inside jokes and niche throwaway pop culture references, Enid and Rebecca invite us into their pact.

There is an exhilarating thrill of saying the basest and most shocking thing just to make your friend laugh, or – in the case of Ghost World – scoff. In that respect, the film’s jokes about date rape, people with mental disabilities, and suicide have not aged well. Enid would probably counter with, “It’s just a joke!” but seeing as the two protagonists are fairly well-off white women, it begs asking: A joke at whose expense?

There is a deeply satisfying materialism in the film. I feel like teenage girls’ rooms in cinema are a category of art design in their own right. Enid’s collection of scarves, records, and thrifted tchotchkes spill over each other, filling each frame of her bedroom. Enid herself demands to be looked at in her Doc Martens, mix of punk aesthetics, and 1950s housewife dresses. While she may be a social outcast, she makes it damn near impossible to ignore her.

Enid, however, can’t sell anything of her own at a yard sale. When you can’t relate to others, you look to fill your life with things. Obsessively collecting and pruning your objects, which are tangible things to point to when asked, “Who are you?” In high school, the number of band shirts I would rotate through as a marker of my personality is staggering.

Just as much as the stereotypical dork or the jock, the high school alternative art girl is an easy category to paint in broad strokes. Enid is as unbearable as Holden Caulfield, believing she’s the only one who can see the hypocrisy in the world. But cynicism is a draining act to keep up.

Enid is so many levels post-irony that she craves sincerity. She finds it in Steve Buscemi’s entirely pathetic Seymour. What starts out as a prank on a middle-aged man becomes a sexually tense friendship between the two. When a teary-eyed and drunk Enid asks Seymour, “Don’t you like me?” before they have sex, it’s deeply uncomfortable. Seymour satiates her desire to be understood and seen, which leads to the inappropriate and manipulative nature of their affair. She is insecure and vulnerable. Similarly, I’ve fallen for guys who could speak my referential language, but fundamentally made me feel shitty.

In the vein of films about female friendship, Ghost World captures the sad, slow drifting apart that has since been reimagined in films like Frances Ha. When you’re young and trying to flesh out who you are, it becomes easy to stake your identity on others. Latching onto someone else to make the decisions in your life is comforting. But there exists a tension of wanting to leave behind the same people who know your history, especially when trying to become someone new.

Rebecca is more assimilated to her post-high school life than Enid. She’s satisfied at her job and has worked towards having her own apartment and ironing board (“Isn’t it great?”). But Enid can’t stay back and float around Rebecca when both are moving away from a once shared centre.

Enid doesn’t feel the grandeur of her high school graduation, but rather an inability to celebrate that milestone – especially when everyone else has moved on with their lives. Clichéd as it may be, Enid is saved by her youth. She tells Seymour that she doesn’t think it’s completely hopeless; it being relating to other people.

The question that looms over everyone’s head in Ghost World is “What are you going to do now?” The irony of taking a mandatory remedial art class isn’t lost on Enid. Her personal diary, a rich collaged notebook brimming with sketches and stories, is dismissed as inconsequential. It isn’t art that challenges a huge social issue, but rather reflects the life of a young woman – a radical act that is also the ultimate point of Ghost World.

I spent so much of my teenage years in a state of waiting. I was loitering in lazy suburban plazas, thinking that somehow, whatever came next had to be better. But it’s hard to imagine better when you’re unsure as to what you want. I try my best not to play into nostalgia, but I think it can be even harder not to look back at all; to bitterly cast aside a period of your life.

I love Ghost World for the ways in which it’s imperfect, like an honest snapshot of me at sixteen. It’s an exercise in empathy, since Enid has only marginally developed by the end of the film. I believe that the politics of female identity aren’t clean cut, and developing your own identity is an arduous process. I still don’t know who I am, but that’s okay. I’m trying to figure it out.