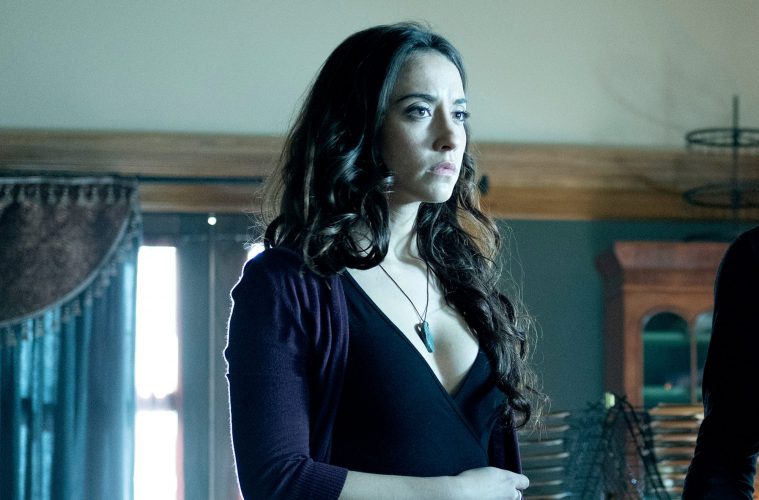 SyFy’s The Magicians calls to mind many things: pithy pop culture references, gorgeous special effects, and oddball musical numbers. But a nuanced portrayal of life as a survivor of sexual assault – grounded in the reality of trauma – is not generally one of them. And yet, the show that many describe as “Harry Potter goes to grad school” largely delivers, albeit with a few noteworthy missteps.

The character of Julia grapples with the aftermath of rape at the hands of a trickster god named Reynard, including an unwanted pregnancy. While the show is decidedly supernatural, its portrayal of Julia’s response to sexual violence and healing from it is incredibly realistic, and one that many survivors can relate to. While the world of the show means that these statements are heightened – bound as they are by the laws of magic instead of physics – it’s a way of demonstrating how universal these feelings and realities are for survivors of abuse and trauma. The show uses its supernatural elements to make very literal and obvious the same realities survivors face in real life, which is unfortunately necessary with the remaining myths and misconceptions about sexual violence.

This article deals largely with Julia’s path as a survivor; that is to say, her time healing from trauma, as opposed to enduring it. It would be a major omission, however, not to mention the largest misstep from The Magicians right from the jump: the portrayal of the rape itself. For viewers, this was either a far worse experience than reading the book’s portrayal, or they were completely blindsided as they came to the show with no experience of the book. Either way, there is no warning, and the portrayal is graphic and disturbing. While so much of what comes after the scene rings true, for many it’s (understandably) too little, too late.

Like many survivors, Julia lives in fear of her perpetrator. While his abilities are greater by several orders of magnitude, the power dynamic remains the same: he can find her, manipulate her, and overpower her. She lives in fear of this, as do his other victims. In fact, it requires an entire community to keep her safe (including Fillory and Brakebills providing sanctuary, even though she once stole from the latter), every hedge witch to pitch in, and a major heist to fund their efforts. Appealing to the authorities is useless, because Reynard is the authorities. Similarly, in the real world, where do you go if the perpetrator is a cop, an RA, or a parent? Those with authority or privilege often manage to get away with it, even when they’re caught.

A major plot point for the second season is Julia’s attempt to terminate the unwanted pregnancy that results from her rape. Like so many survivors, she has to jump through far too many hoops to do so, and in the end, it’s an expensive and unsafe procedure. (Though it’s one that she was always certain she wanted, and one that her friends immediately, unquestioningly supported.) Julia (temporarily) loses her soul as a result of the procedure – a problematic turn of events, as it feeds into the pro-life narrative about abortion being sinful or otherwise soul-crushing. Many characters who even consider an abortion on-screen later die, and abortions are 20 times more dangerous on TV than in real life. (Even though other medical procedures like CPR are much more life-saving on screen than IRL.) The reality is that showrunners have a greater responsibility when portraying abortion storylines than with other, less fraught subject matter. On the other hand, some fans have interpreted this plot as paralleling the dangers inherent in limiting access to free, accessible abortions, which is a more forgiving interpretation from a liberal perspective.

Memory is a tough topic for survivors of sexual assault; some have no memory of the events at all, while others recover bits and pieces in the months or years to come, perhaps with the aid of therapy. It’s very common for memories of trauma to be incomplete, non-linear, fuzzy, or otherwise confusing. This may lead a survivor to mistrust their own memories, and it certainly has given rise to the general public questioning and blaming victims when their stories seem incomplete, unclear, or inconsistent. Experts in trauma, sexual violence, and neuroscience all expect this, but the general public is still incredibly uninformed about this aspect of trauma, leading to a lot of victim-blaming. All of this happens because the brain is trying to protect the survivor from the full force of the information it’s hiding, due to the traumatic nature of the attack. For her part, Julia has hedge witch TK create a memory spell to mask what happened when she summons Our Lady Underground, putting a positive, false memory in its place to protect herself from the brutal truth. In this way, Julia’s memory loss is a very literal demonstration of the commonly misunderstood way the brain protects itself, which many survivors of sexual trauma experience.

The concept of “asking for it” is strongly associated with sexual violence in our culture, and Julia, like many strong survivors before her, is no exception. In her case, she feels like she quite literally asked for it, because Reynard only appears after Julia relentlessly pursues Our Lady Underground. Like so many survivors, Julia finds a grain of truth — she summons the goddess — and twists this fact to be as unkind to herself as possible. There are a few reasons survivors might do this. Some feel that if you blame yourself first, it might take the sting out of others doing so. Another possibility is that after hearing others blame the victim so often, a survivor may have internalized that themselves. Finally, if a person were to consider that they truly did nothing wrong and something this terrible happened to them anyway, it would be overwhelming. Sometimes it just feels easier to blame oneself. Of course, Julia is no more to blame than any other survivor, because blame lies squarely with the perpetrator.

While Julia is living without her “shade” – the functional equivalent of a soul in the world of The Magicians – her behavior changes drastically from the Julia we knew before. She becomes singularly focused on vengeance, endangering herself and others. Her sense of safety is warped, as she is no longer concerned about what happens to herself. We see this when she leaves the magical safety net of Brakebills and its wards behind, knowing that her perpetrator Reynard is searching for her. She also feels numb and seems callous to others, most notably when she commits genocide by setting off a chain of events that leads to an entire race of ancient, sentient tree people going up in flames. In fact, Julia spends most of the second season at odds with the rest of the main characters, as she pursues vengeance on Reynard first by teaming up with Martin Chatwin, the first season’s Big Bad who is killing all of magic, in Fillory and elsewhere. This is in stark contrast to how much it hurts Julia to feel isolated from Quentin in the first season, and the kindness and empathy we see her show toward her fellow hedge witches while they seek out Our Lady Underground.

Julia’s experience may seem entirely supernatural, but in reality, it is entirely grounded in some of the possible symptoms for those who have experienced trauma. Survivors of rape and other forms of sexual violence may develop post-traumatic stress disorder (PTSD), a mental health condition that trades in extremes. A person may go toward one emotional extreme or the other, such as becoming extremely sensitive to emotions or feeling totally numb, or vacillate between the two extremes from one minute, hour, or day to the next. Julia losing her shade is an example of that extreme numbness, but we also see how she gradually learns to modulate her emotional response with time and emotional support, so that she can live with her trauma long-term. Even though Quentin at first thinks Julia is a shell of her former self, he comes to see that even without her shade (that is to say, even after rape), Julia can still be a person capable of goodness and light. While Julia’s soul is eventually returned to her, there is no magic spell for healing. Just like any other survivor, she has to do the work on her own. Depending on the survivor, therapy, medication, and support from friends and family can all be helpful (or even essential) ingredients, but none of them work unless the survivor does.

When Julia is faced with the opportunity to kill her perpetrator, she makes a choice that surprises many, including her best friend Kady: she lets him live. Julia had been seeking revenge for so long, but she had also changed during that journey, and ultimately makes the healthiest choice for herself. She certainly doesn’t spare his life for his own sake. She will still have to live with Kady’s judgment, and likely that from others around her, like so many survivors before her. As a result of her decision, however, Julia is rewarded with the return of her shade, or her soul. (Unfortunately, this also reads as concerning messaging here about the need to forgive perpetrators, especially since the only other victim of sexual assault on the show, Martin, never forgives and becomes a villain, with Julia seemingly poised to became one herself.) I don’t think that this is the intent, but forgiveness is a tricky subject with sexual violence, and not something to wade into lightly.

Importantly, Kady and Quentin do their best to support Julia’s response to this trauma in a nonjudgmental way. They don’t always succeed and Quentin generally has more trouble being supportive, but they both come around in the end. For survivors, whether they have magic or not, having a strong support network can make a huge difference in their overall recovery, including their likelihood of developing PTSD. Their unflinching support of Julia’s abortion, unwavering faith in her version of events, and strong support of her unique path toward healing are all recommended steps for supporting a loved one recovering from traumatic sexual violence.

While it may seem far-fetched, Julia on The Magicians has largely followed a realistic path toward healing, despite the supernatural elements inherent in her assault. Though the initial scenes are filmed in a brutally violent way and a few aspects of the story may give us pause, it is largely a complex story that survivors will recognize as holding up a mirror to their own experiences, although with a magical twist.