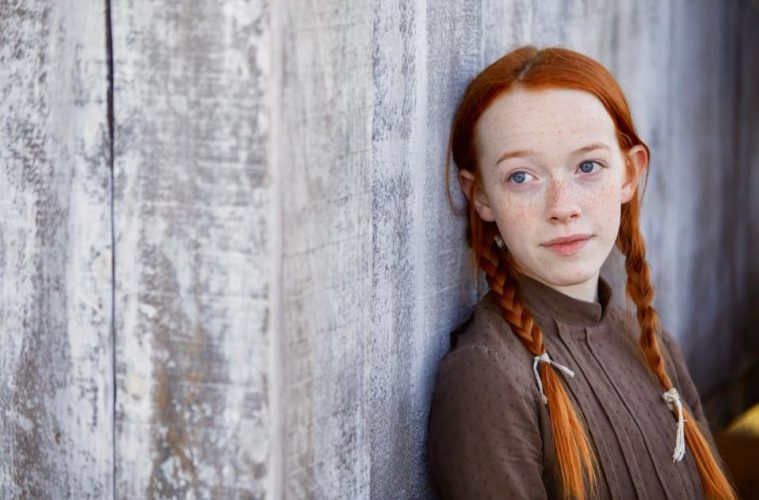 On Anne Shirley’s first trip to the beach with Matthew and Marilla, she takes in the breathtaking Prince Edward Island landscape and says, “I’m so glad I get to live in a world where there are Octobers!” Arguably, this is the most quoted line from L.M. Montgomery’s 1908 novel, Anne of Green Gables, especially when October 1st rolls around. It’s also the only line in the entire first episode of the Netflix/CBC series, Anne With An E, that comes directly from its source material. Last season, the creators made it clear that this Anne would not only be departing from the novel but also from the Anne brand itself.

However, at the season two premiere event held at Yonge-Dundas Square in Toronto last weekend, it became apparent that there is a new Anne brand as well as a new target demographic for this brand. The event featured a photobooth area where flower crowns (made with real flowers) were given to guests, and with the right hashtag, you could find your photo on the billboard of Yonge-Dundas Square! Soon, there were hundreds of young female tweens, sometimes accompanied by parents (who good-naturedly sported flower crowns as well), buzzing about the possibility of meeting Anne herself, played by actress Amybeth McNulty.

Last season, the target audience for this new adaptation was a bit unclear. Die-hard purists hated the dark revamp while those who had never read the novel or watched the 1980s Megan Follows version were willing to get on board. Opinions at this year’s L.M. Montgomery conference in Prince Edward Island were similarly divided – either you loved it or hated it. Regardless of what side of the debate you found yourself on, the fact remained that Anne With An E was the fourth most-binged show on Netflix and was quickly renewed for a second and third season before its Canadian premiere. The hundreds of fans who flocked to Yonge-Dundas Square for the premiere event, ranging from ages 11 to 16, are the new generation of Anne fans, and based on the amount of flower crowns and selfies taken that day, Anne With An E is successfully reaching them. They’re making Anne “cool” again.

This new demographic was partially the inspiration for the Anne revival. One of the series’ producers, Miranda de Pencier, shared that this Anne adaptation was inspired, surprisingly, by Instagram, or rather the way that the younger generation uses Instagram. She says that the images she came across on her newsfeed of oversexualized and unrealistic women compelled her to find a positive, authentic role model for young women. Given her previous work in the Anne canon, having played frenemy Josie Pye both in the 1980s Sullivan Entertainment version of Anne of Green Gables and in the musical, she knew that Anne was a role model with a timeless appeal. Since 1908, Anne has been a source of inspiration for young readers, especially women. She has her insecurities, but above all, she remains true to herself. Her imperfections become her greatest source of strength. This is the message that de Pencier wanted young viewers to come away with, and it extends beyond what was shown on-screen. Behind the scenes, the series’ production company, Northwood Entertainment, insisted on an all-female writing room. In an interview with TV Junkies, Amybeth McNulty shared, “It was a great experience for me as a young girl to be surrounded by such beautiful, powerful women.”

However, the series does not stop with feminism or women in film. This season, producers have decided to expand their mandate to include issues of racial discrimination and how they would play out in small-town Avonlea. They’ve added a new character to L.M. Montgomery’s universe: Sebastian (or “Bash”), an Afro-Caribbean worker played by Canadian actor Dalmar Abuzeid. Bash forms an adorable bromance with Gilbert Blythe, and their friendship forces Gilbert to realize his own privilege. While Bash’s storyline adds diversity that was perhaps lacking in L.M. Montgomery’s original story, he is not, as some have claimed, the first Black character ever to grace the Anne of Green Gables canon.

In fact, this year, the Anne of Green Gables musical in Charlottetown (the longest running musical in history) cast its first non-white actor, J.J. Gerber, in the role of Gilbert Blythe, while Black actress Tara Jackson played Anne’s favourite schoolteacher and mentor, Miss Stacey. Those who attended the L.M. Montgomery Conference in Prince Edward Island this year learned that the Queen of Soul herself, Aretha Franklin, was a huge fan of Anne of Green Gables because she saw Anne as a “can-do kind of girl.” In 2015, Black Finnish student Laura Eklund Nhaga began the YouTube web series, “Project Green Gables,” where she plays a modern version of Anne Shirley. Much of the story is adapted to reflect Nhaga’s identity as a young Black woman, including her relationship to her hair. The fourth episode, titled “Ought To Have A Weave,” is a direct recreation of Anne’s first encounter with Mrs. Lynde but from the perspective of a Black character. All of this to say that while it’s great that Anne With An E is pushing for diversity in Anne of Green Gables adaptations, other adaptations concerning race and diversity in the Anne canon should not be overlooked. All of these adaptations encourage viewers to ask: How have others been navigating racial identity in a predominantly white literary canon?

In many ways, Anne With An E replicates attributes of Anne herself – it’s blunt, melodramatic and, at times, super extra, but it is also earnest and authentic. The second season certainly feels more confident; it has committed to straying from the book, and with that comes creative freedom to explore new issues – race, queerness, sexuality, and of course, the glue that holds it all together: feminism. Rather than being restrained by fidelity to its source material, the actors are free to interpret their characters without fear of being compared to other incarnations. From its inception, this Anne was meant to be different than all the Annes that came before. Whether we like it or not, this is next generation Anne.