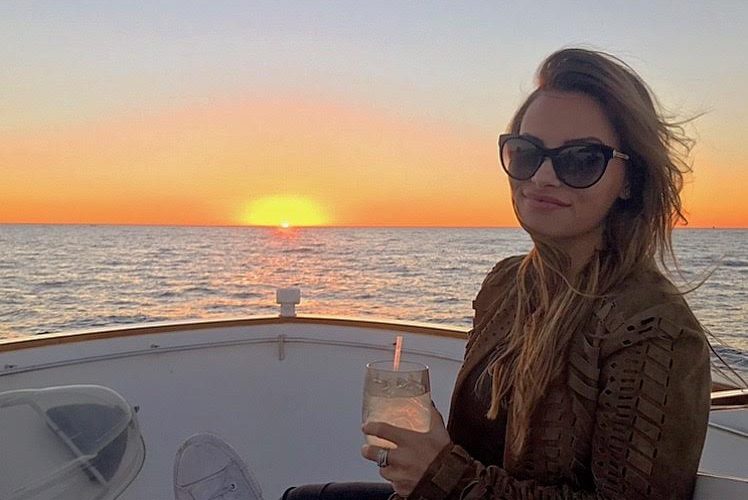 “It’s All Happening So Fast”: An Interview with Rising Producer Siena Oberman

Siena Oberman has the sort of résumé that is at once intimidating and inspiring. The 23-year-old producer, whose first three shorts screened at Cannes and who completed three feature films while in school, has already established herself as one to watch.

Just in the first half of this year, she wrapped production on four feature-length projects, and major ones at that – they feature talent like Alexis Bledel, Kurt Russell, Suki Waterhouse, Luke Hemsworth, and Josh Hutcherson. We chatted with Siena recently about being a young producer, juggling multiple projects at the same time, and learning by doing.

RH: You grew up in Los Angeles and eventually attended university there. How has being LA-based influenced your relationship to film and desire to work in the industry, if at all?

SO: Growing up, I had a film program at my high school, which got me into making short films and shooting around LA, mostly the South Bay. Full creative freedom in classes made me fall in love with writing, directing, editing, and filming cinematic stories. After that, I went to LMU [Loyola Marymount University] and USC [University of Southern California]. Attending film school in LA was helpful because it allowed me to work on shorts and features, and work for producers, studios, distributors, and agents during school. After five years of doing this, I knew a lot of talented up-and-coming filmmakers from school and festivals who I was able to bridge with friends’ production companies, investors, and other artists to get the films made.

What was your first ever film job?

I’d been a PA on a few commercials and directed short films, but in terms of an actual job, I’d say interning for Route One Entertainment and IM Global (which is now Global Road). It helped direct my career because it was like a crash course on the indie film world and the international business side of entertainment.

You’re only 23 and, remarkably, already producing features with substantial budgets and talent. Do you find that being a young producer gives you a certain leg up, or is it something you seemingly have to prove yourself because of?

Thank you! I think it’s both. Being young helps me connect with a lot of talented filmmakers before they break out because we can grow together. Some people have been really generous with their time to give me advice because I’m young, which I’m thankful for. At the same time, producing requires a lot of knowledge, so on each project I’m thrown into the fire and learn by doing, which means mistakes are inevitable. I’ve worked with some people who’ve been really critical of mistakes, but now surround myself with people who see mistakes as growing experiences. I’ve developed a good attitude about it too – being too afraid to take chances means a film will never get made. I’ve been told multiple times that people have underestimated me as a young female producer, but they’ll learn as I grow. Now that I’ve finished four features in the last six months, people are taking me more seriously.

The thread that seems to connect a lot of your work is social justice. When did that first become something that interested you?

I worked with the Red Cross on their National Youth Council, which taught me to have intrinsic motivation and look at the ‘why’ behind each decision I make that could impact stories. Films have such an impact on society, it doesn’t make sense to me not to have a human impact element in them. In Burn, I liked that there was a reversal on gender norms and inspiring, strong female characters. In Crypto, I liked that it’s going to inspire a lot of people to look into a new technology (cryptocurrency and blockchain), which could help people in countries with unstable currencies. The new film I’m working on, Turn Out, is a story about human trafficking and the criminal justice system, so I try to do a mixture of social justice and commercial stories.

It’s been over nine months since #MeToo first appeared on the scene. What are your thoughts on the movement and does it seem to have had any impact on your work environment?

It’s been an incredible year with a huge impact on entertainment internationally. I’ve seen producers targeting female directors more since investors and festivals are looking to create more equal representation. I’ve also seen multiple investors reject projects with good directors or talent because they weren’t respectful towards women. I’ve mostly seen the arguments for equality coming from a business side because people are afraid of #MeToo-related backlash ruining the distribution of the film. I still think we have a long way to go, but I’m thankful for everyone who was brave enough to share their stories to start this movement.

What’s the best or most useful advice you’ve ever been given?

Years ago, I was interested in doing all the different aspects of filmmaking (directing, producing, and writing), and one of the CEOs of Warner Bros. told me to focus on one thing and get really good at it, then enjoy the freedom to do the rest. Having laser focus on producing has helped me move forward a lot more quickly, even though I love all the other parts of filmmaking too. @garyvee, one of my favorite Instagram accounts, says to give, not take, value when developing a relationship, so that’s something I’ve found useful in building my career as well.

On the flip side, what’s the worst or most unhelpful piece of advice you’ve ever been given?

I was told by an established executive about nine months ago to stop making films no one’s going to see and become an assistant to someone big if I wanted my career to go somewhere. I had confidence in my partners and our stories, so even though I knew it came from a trusted, successful source, I ignored it and committed to taking the risk of getting movies made as a young indie producer. We’ve been getting into top festivals and our budgets have multiplied by about ten times in less than a year, so I’m thrilled I took a chance I felt passionate about instead of following the corporate ladder to success. Everyone has a different path so I’m just trying to experiment and find mine, not necessarily follow something that’s a safety net.

I read that you’re currently attached to four low-budget indie features this year, which is incredible. How do you take care of yourself and stay grounded when you’re juggling multiple projects like that?

Yes! Thank you, it’s hard to believe it’s all happening so fast. Four are now wrapped and in post-production, so there will probably be a few more films this year done. It helps that I have amazing partners who pull their own weight, so it’s not too hard of a process. I let myself stay in instead of always going to events when I’m tired, I do Pilates and acupuncture, I spend a lot of time with close friends who I’m lucky to have keep me grounded, and I try to just work with good people because then it’s enjoyable, not stressful. I’ll take breaks and travel with friends or family and ignore emails and social media. Having an attorney I can always depend on for advice helps too, because then I know deals are fair.

What’s one thing you think any aspiring filmmaker can do to set themselves up for career success, even if they’re still in school?

They could figure out people they admire and try to intern for them, even if it’s for free, because there’s so much to learn! It’s important to find inspiration and learn to think that anything’s possible.

Who are the industry people you’re inspired by? Are there any production companies you admire in particular lately?

Yes, there’s so many! I’m inspired by the team I’m working with at Yale Productions because they’re kind and generous producers who consistently get films made quickly, which is hard to do. Plan B Entertainment, who I worked for, has always been an inspiration because of the quality of stories they choose to tell. Rose McGowan, who has been vocal during the #MeToo movement, has a really inspiring doc [Citizen Rose] out. Angelina Jolie and Margot Robbie have been telling great stories and doing female empowerment, which is awesome. The young writers and directors I work with also inspire me because they’re so creatively brilliant, they think big, they want to make stories with social impact, and they’re kind, which is always a refreshing break from negotiations and legal on difficult deals.

What’s next for you in your career?

It’s hard to tell what film is going into production next because it usually depends on which cast and financing comes along. I’ll be creatively developing scripts and financing features in the $1-10 million range, either horror, drama, or thrillers. I’m working with Yale Productions on their slate, so I’m excited for the next project we’re shooting in upstate New York!