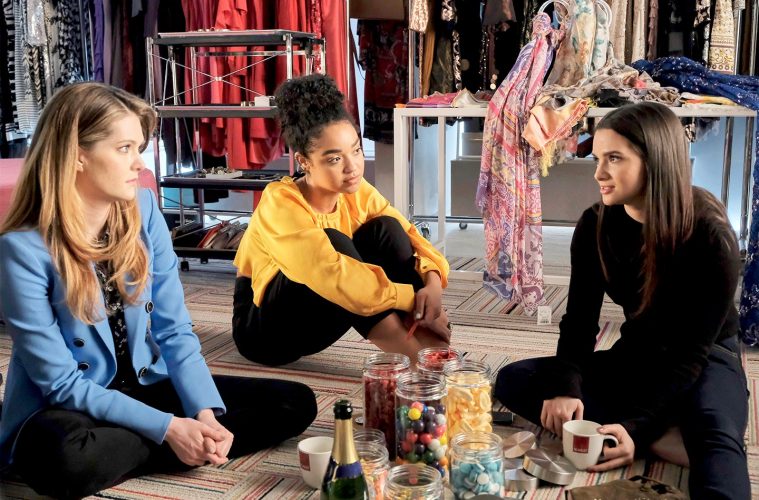 Review: ‘The Bold Type’ Season 2 is Better, Brighter, and Bolder

The Bold Type is everything a girl who grew up in the early 2000s could ask for. It’s equal parts Sex and the City, The Devil Wears Prada, and Aquamarine, with a progressive and positive edge, set on having important conversations about business, friendship, and the shitstorm that is America today. In the first season, the show tackles sexuality and racism in a way that is inspiring and entertaining. Even with the change of hands having Amanda Lasher step in as the series’ new showrunner, the second season immediately picks up where it left off. The show delves deeper into the issues and characters established in the first season, all while illustrating the importance of female camaraderie and how it is slowly but surely carving a place for itself in the world.

At the centre of the show are three friends: Kat, Sutton, and Jane. These women all met at Scarlet, a magazine that mirrors the renown and adaptability of Cosmopolitan. Kat (Aisha Dee) is the first Black woman to act as Head of Social Media for Scarlet, and is adamant about bringing change to the magazine while remaining true to her morals. Sutton (Meghann Fahy) is willing to do anything to graduate from a designer’s assistant and earn her rightful place as a full-fledged designer, even at the cost of – *gasp* – her relationship. Jane (Katie Stevens) is a writer who hits rock bottom after being fired from a job, rejected from Scarlet after quitting last season, getting rehired after a freelancing stint, and then finding out that she is a carrier of the same gene mutation that her mother died from. The three work in relative harmony under the close watch of their two bosses/mentors/queens: Jacqueline (Melora Hardin, aka Jan from The Office!), the warm and supportive editor-in-chief of Scarlet, and Oliver (Stephen Conrad Moore), the tough but tender Head Designer. That’s a lot to follow, I know, but the show’s ability to remain captivating and optimistic while the characters deal with work, friendship, and current events make it so refreshing and fun to watch.

One thing I’ve admired from the beginning of the show is its capacity to create storylines surrounding the workplace and actually engage in what Kat, Jane, and Sutton are doing in each of their individual careers. While the show is generous at times with what the women can get away with (i.e. taking a road trip during a website launch, putting $500 worth of cocaine on a company credit card – you know, the regular stuff), it still creates situations at work that challenge them. For example, in “Rose Colored Glasses,” Sutton has trouble booking the location that Oliver wants to use for a shoot. After multiple attempts to appease the owner and with time running out, Sutton recruits her friends and drags them to a flea market where they haggle and eventually get enough set decoration to resemble one corner of restaurant that they wanted to shoot at. The hustle and mobilization of the women illustrates how much they care for each other, which is the secret to their success.

The friendship between Kat, Sutton, and Jane is relatively consistent, but the moments when things get difficult illustrate the strength of their bond. In “Stride of Pride,” Jane is upset after hearing that the job she went out for would not hire her because of a push for diversity. Things get tense when Kat reminds her that diversity is a good thing and that she should check her privilege. While Kat spends a good amount of the episode dishing out emotional labour and explaining why Jane’s comments were insensitive, there’s a glimmer of hope at the end when Kat leaves and Jane googles “how to check my white privilege” instead of asking Kat to explain it to her (which, as mentioned in this article, is an exhausting thing that POC experience frequently). In the first season, the show was criticized for not addressing Kat’s race, and throughout this season, it has made an attempt to rectify that with more (but not wholly) intersectional storylines. While there is also a bit of pandering to Jane’s experience, I admire the show’s attempt to illustrate how difficult it is to talk to friends about race. Strong friendships come from showing up and calling your friends out for their problematic behaviour, even when it is difficult, and this season illustrates just that.

There is an abundance of conversations in the second season revolving around issues facing America today. From white privilege to body positivity to sexual assault, The Bold Type makes an effort to navigate these issues with sensitivity and understanding. “Betsy” is an episode in which Jane and Kat find out that Sutton owns a gun, which causes a rift between Jane and Sutton. At the end of the episode, Jane reveals that she went to school five miles away from Columbine, and Sutton reveals that she used skeet practice as a means of escape while taking care of her alcoholic mother. The conflict comes to an end when Jane explains her experience and Sutton realizes that she needs to leave her past in the past. She melts her gun down into jewelry (which is just a great alternative). This episode advocates for gun control while illustrating the breadth and significance of gun culture in America. Fortunately, Sutton has the capacity to listen to the experience of her friend who has been affected by gun violence and puts aside what she grew up with. The understanding that Sutton and Jane come to is not a compromise, but an acknowledgement of the world we live in today and a need to stop looking to the past for an answer.

The Bold Type is a new kind of show. Its ability to weave positive feminist rhetoric with high production value on a major television channel is an admirable feat. The stories it tells about women, their jobs, friends, and the world make me feel like I’m a part of it and not just watching it happen. I see bits of my friends in these characters, and watching them succeed gives me hope. The Bold Type is in no way realistic, but it does its best to encourage taking action in the face of adversity and trusting those who care about you. The second season of the show elaborates on the aspirations of its first season, and I can only hope it’ll get bolder with the next.