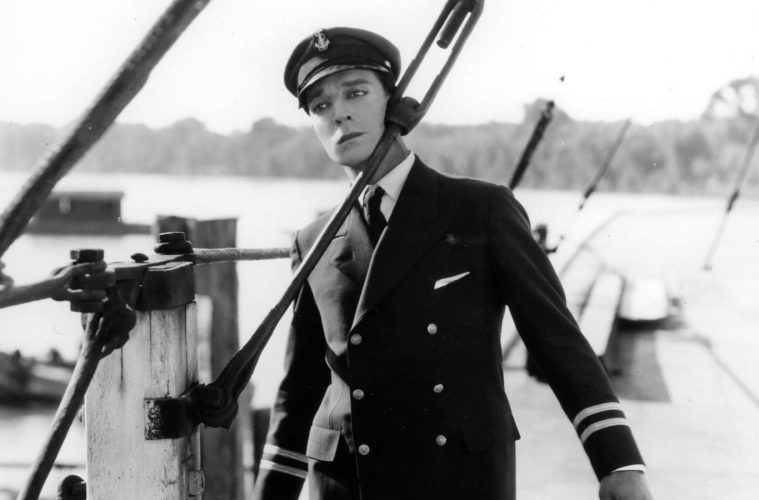 Review: ‘Steamboat Bill, Jr.’ is So Much More Than Its Famous Stunt

Death-defying stunts are as synonymous with Buster Keaton as the toothbrush moustache and bowler hat are with Charlie Chaplin. Steamboat Bill, Jr., which celebrates its ninetieth birthday this year, is no exception to the trend. In this particular Keaton film, the renowned stunt in question has him standing completely unaffected as the façade of a house falls down on top of him, its sole open window saving him from a deadly fate. While the sequence is undoubtedly spectacular and worthy of its fame, there is more to Steamboat Bill, Jr. that merits just as much attention.

Set in a riverside town in Mississippi, the film opens with steamboat owner William Canfield (Ernest Torrence) cursing the arrival of a brand new, much larger steamer owned by his wealthy rival, J.J. King (Tom McGuire), who disparages him in front of the whole town. Down on his luck, Canfield is thrilled to suddenly receive a telegram from his son, William “Willie” Canfield, Jr. (Keaton), whom he hasn’t seen since he was a child. Willie soon arrives in town and is clearly a far cry from the “big lad” his father hoped he’d be. Five feet and four inches tall with a pencil moustache, wearing a beret and carrying a ukulele, he would sooner fit in on a Parisian boulevard than a rusty old steamboat. Unsurprisingly, their relationship doesn’t get off to the best start, as Canfield immediately attempts to mould Willie into his ideal son – much to the latter’s hesitancy.

To make matters worse, Willie’s college girlfriend, Kitty (Marion Byron), is also in town visiting her father, who happens to be none other than Canfield’s rival, King. Willie’s stature and sense of style only stoke the fires of King’s disdain, causing Canfield to become even more desperate to change him. Ridding him of his quasi-French style and beloved musical instrument, he acquaints his son with the ins and outs of working on a steamer, an occupation that poor Willie does not take to with ease. Although dressed for the part, he stumbles clumsily around the boat like a fish out of water, getting in the way of everyone and everything, which creates as much pathos as it does hilarity.

Unlike Keaton’s previous roles in films like The General (1926), Willie induces a great amount of empathy through the naivety and awkwardness with which he attempts to navigate a foreign world, all while being pulled in two different directions by his father and the love of his life. This isn’t to say that Keaton’s other characters are one-dimensional, but the films in which they appear tend to focus more on plot and action, and leave little room for character development.

Steamboat Bill, Jr., on the other hand, ultimately favours emotion over motion, building relationships in lengthy scenes where the narrative is maintained in one place and at one point in time. One such scene later in the film provides a shift in Willie’s relationship with his father after the latter is imprisoned for fighting with King over the condemnation of his boat. Despite Canfield having grown weary of his son’s maladaptation and subsequently telling him to return to Boston, Willie resolves to break him out of jail. Armed with a loaf of bread full of tools, he marches to the prison and fools the sheriff into thinking he’s just there to give his father some bread. Although Canfield initially rejects what he believes to be a pitiful gesture, he soon catches on to Willie’s plan and goes along with the pretense.

However, the sheriff discovers Willie’s true intentions when the tools accidentally fall out of the bottom of the loaf, and he angrily shoves him around after he tries to run away. In spite of the strained nature of their relationship thus far, Canfield is quick to leap to his son’s defense and encourages him to stand up for himself; Willie complies, knocking the sheriff unconscious. Through teamwork, they manage to locate the right key to unlock the cell door and Canfield warmly embraces his son, clearly proud of his bravery. The scene is pivotal for the development of both characters; tough-cookie Canfield finally softens his edges and learns to support his son who, conversely, finds the courage to assert himself and not be bullied.

The film’s dedication to characterisation over action also opens up space for more subtle, clever comedy to thrive in addition to the moments of traditional slapstick. While Willie’s soft punch to the sheriff’s abdomen is rather amusing, his feigned insistence that the tools got into the loaf of bread when “the dough fell in the tool chest” – as told in a single intertitle – is undoubtedly even funnier and wittier. Although uncredited, Keaton actually wrote the script for the film, which goes to show that his comedic talents went beyond the physical body and into the written word.

The film’s final act, which features the gripping ‘house fall’ stunt, is fifteen minutes of pure, unadulterated, Keatonian cinematic mastery. Although Canfield goes on ahead and manages to escape the prison without a hitch, Willie ends up getting caught by a group of passersby who question him long enough for the warden to awaken and deliver a retaliating blow to Willie’s head. Not realising that his son had fallen behind until it’s too late, Canfield angrily watches on as he is carted off to a hospital somewhere in town. As Willie is resting in a hospital bed, an intense storm hits and wreaks havoc across the town, in what was an extremely costly sequence to produce. Buildings collapse, debris flies around haphazardly, and driverless vehicles charge down streets as Willie desperately tries to get to safety, his methods of which include clutching onto a tree which is then forcibly uprooted and blown across town with Willie still attached.

While the storm sequence does initially appear arbitrary, it provides an epic showcase of Keaton’s infinite imagination and sheer dedication to the art of filmmaking. Such technical prowess seems completely ahead of its time, and its grandeur is matched only by Keaton’s astonishing physicality as he effortlessly rolls and tumbles in such a way that makes one wonder how he wasn’t permanently in an orthopaedic cast. The sequence also crowns Willie the unrivalled hero of the story – he risks life and limb to save not only his own father but Kitty and her father too, which seemingly puts an end to the Canfield/King rivalry for good as the two patriarchs shake hands.

Over the course of an hour and ten minutes, we see our charming protagonist evolve from a shy, timid city-dweller into a brave, confident skipper in the making; he defies all expectations and shows that he’s more than just a big heart in small boots. Steamboat Bill, Jr. is an underdog tale, a coming-of-age story, and a Romeo and Juliet-esque romance all wrapped up together in one heart-warming dramedy that anybody could relate to, which is why I truly believe that it is Buster Keaton’s magnum opus.