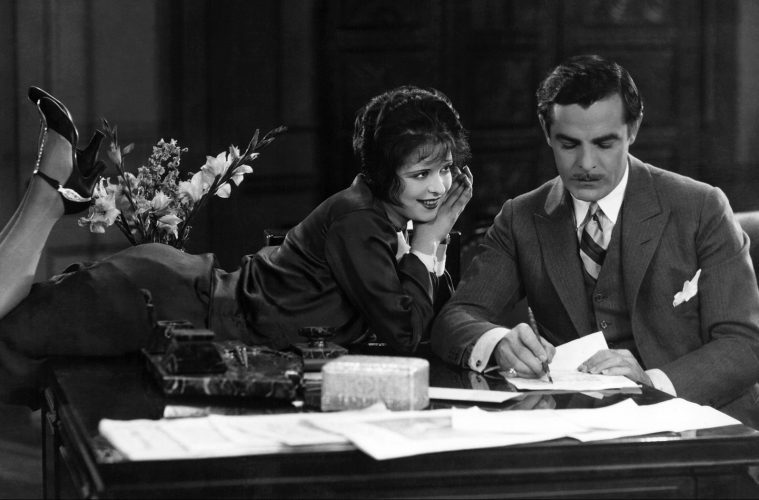 This year marks the 90th anniversary of It, a silent screwball comedy starring Clara Bow that was released in 1927. On the surface, It tells the story of Betty, a shop girl who has recently taken up a post at Waltham’s department store. She takes a shine to the store owner, Cyrus Waltham, and cooks up a scheme to turn his head. So far, so familiar. But the film’s central conflict reveals its depth, and not just because they end up in the ocean! Betty lives with her friend Molly, a young single mother struggling with an illness. When social services tries to come and take her baby away, Betty takes charge of the situation by convincing them that the baby is actually hers. And wouldn’t you know it, Mr. Waltham’s buddy Monty shows up at that exact moment. Betty has to convince him, too, that she’s the baby’s mother, or the jig will be up and her friend will lose custody of her child.

A local newspaper runs the story and Waltham loses all potential interest in Betty once he thinks she has been tainted. When women are called the weaker sex, it rings true if you think of it in terms of our weakened social status. I feel that the female co-writers of this film lend it empathy and complexity, where otherwise it may have been played just for laughs. Betty is in a privileged position, and she uses that position to help more vulnerable members of society despite the personal risks. The film is not so kind to Adela, Betty’s blonde and decadently rich adversary.

Clara Bow plays a fantastic character. She has what Arthur’s character in The Holiday would describe as “gumption”. Don’t have a date? Flirt with the sidekick and dine in style at the Ritz. Nothing to wear? Cut the back off your dress and sew it into something even better. Get rejected by your crush for doing the right thing? Scheme to have him propose and rub it in his face! And in true Classic Hollywood fashion, Betty has all the snappiest lines of dialogue. Her best lines have significance outside the events of the film, from chastising Mr. Waltham for being “One of those minute-men, the minute you meet a girl you think you can kiss them!” to explaining away Monty’s presence to social services (“Him? He couldn’t even give birth to a suspicion”). Betty possesses agency and integrity, and although she loves Waltham, she isn’t willing to compromise on her principles to be with him. I struggle to believe this would be the case if It hadn’t been co-written by women, and in fact, I think that his interest in Adela would have been the central conflict, which would have made for a weaker story.

It would be nice to believe that women have covered a lot of ground in our marches for equality since It’s release in 1927. You could add up all of the films with great female ensemble casts, like Ghostbusters, Rough Night and Girls Trip, the smash hits directed by women (Wonder Woman or The Beguiled, anyone?), and the dozens of actresses taking up arms behind the camera, and come out thinking that we’ve finally reached gender parity in the film industry (or in Hollywood at least).

But each year, the British Film Institute releases data which shines a light on the less glamourous sides of the industry. At a glance, you’ll learn that the percentage of women cast in credited roles was 31% in 1913, and in 2017 it’s 30%. Yep. Some more fun facts: While female doctors make up 52% of the National Health Service roster, women were cast as unnamed doctors in film only 3% of the time from 1911-1985, and only 15% since. Plus, less than 1% of film crews have a female majority. It’s no surprise that having a shortage of women working behind-the-scenes in the industry has a direct impact on the number of well-rounded stories about women we get to see.

Elinor Glyn, who wrote the original story that It was based on, is famously credited for the phrase ‘It girl’, and the assumption that people often made was that ‘It’ meant sex appeal. But Glyn went to great lengths to set people straight, arguing that anyone who said that ‘It’ was shorthand for sexiness was vulgarising her concept.

According to the film, “‘IT’ is that quality possessed by some which draws all others in with its magnetic force. With ‘IT’ you win all men if you are a woman – and all women if you are a man. ‘IT’ can be a quality of the mind as well as a physical attraction”. And in Elinor Glyn’s cameo, she elaborates that ‘It’ is a “self-confidence and indifference to whether you’re pleasing or not”. So why are we still denying the interiority of women’s lives 90 years later, to the point where our experiences are so interchangeable that Scarlett Johansson could be cast in Ghost in the Shell as Japanese character Major Motoko Kusanagi? This phenomenon isn’t exclusive to franchises. Consider Deborah from Baby Driver. Her entire appeal is surface-level, she’s beautiful, she likes music, and she possesses the same vague wanderlust that Baby does. Even if we look beyond the studio system, indie films are notorious for their love of Manic Pixie Dream Girls with no identity beyond their appeal to men.

Swap out Clara Bow for Mary Elizabeth Winstead, add some sound, a splash of colour, and It could easily have been this year’s latest blockbuster, and a progressive one at that.