I Made a Web Series for My Twenty-Year-Old Self

Crystal is presented as a series of vignettes told from the point of view of Crystal, an up-and-coming graphic designer in Los Angeles with a penchant for daydreaming. (While also dealing with the everyday struggles of living in LA.) Most of us have experiences with roommates from hell, and maybe once upon a time, you were even a roommate from hell. Crystal isn’t perfect, but she tries her best. I wanted to make something that was true to the protagonist’s inner thoughts, based on personal anecdotes from my 20s… and believe me, I have a lot of stories. I also wanted to show how a lot of us cope by ignoring our emotions, digging into our work, and retreating into our own heads. Like, it’s not right or wrong; it just is. I know that a lot of people in my age bracket – especially creatives – identify with the tendency to daydream and fantasize about what we wish for in our lives, what could be different, and the things we wish we could say without consequences.

Crystal’s first episode, “Spare Key,” begins with a seriously relatable moment for any two roommates who are actively dating in the modern age. Seriously, it’s a jungle out there, and with the kinds of guys LA has to offer, it’s wise to think twice about who you’re giving your spare key to! We also touch on Crystal’s newly-ended relationship, which is juxtaposed with the beginnings of Nikki’s brand new relationship. There’s a lot to unpack in just a simple scene, because at the end of the day, Crystal the character and Crystal the web series are based on real-life situations that people experience all the time, like having a romantic “type” and being in denial about it. Girl, we’ve all been there (as both Crystal and Nikki), and we all know how hard it is to defend that peanut butter…

Nikki is kind of like the toxic roommate we’ve all had (or not, if you’ve been lucky). They eat your food, use your stuff without asking, and generally don’t care if it bothers you. Thankfully, we see that Crystal isn’t going to take this crap without a fight. Here we have all the makings of a millennial household – no sense of boundaries or personal space, as Nikki doesn’t seem to realize that she’s in Crystal’s way and using Crystal’s stuff. I think being able to live alone is a milestone you hit after putting in a lot of necessary work in your 20s, living with all kinds of folks with different personalities and backgrounds. It builds character, makes you understand your own boundaries, and helps you to read others’ boundaries and try to coexist together with as little drama as possible. I live with my partner right now and it’s great because of all the ‘training wheel’ living situations I had when I was younger. Nikki and Crystal aren’t quite there yet, though, so we get to see them clash in the second episode, called “Computer.”

In the third, “Wet Sponges,” we see another situation we’ve all been through: tidying your damn house and dealing with the fact that one roommate is never going to be as good as you are about cleanliness. Nikki loses her purse and her main worry is the loss of her makeup. What does that even say about her views on how men see her, especially with her new boyfriend Colin? As women, we want to feel good and be ourselves, but there are so many unspoken expectations from guys about how we should look and behave. Crystal and Nikki cut loose and get dirty when they finally clean house, which is supposed to be a freeing, fun, nasty activity. (Also, major PSA: squeeze out your damn wet sponges after you use them!) 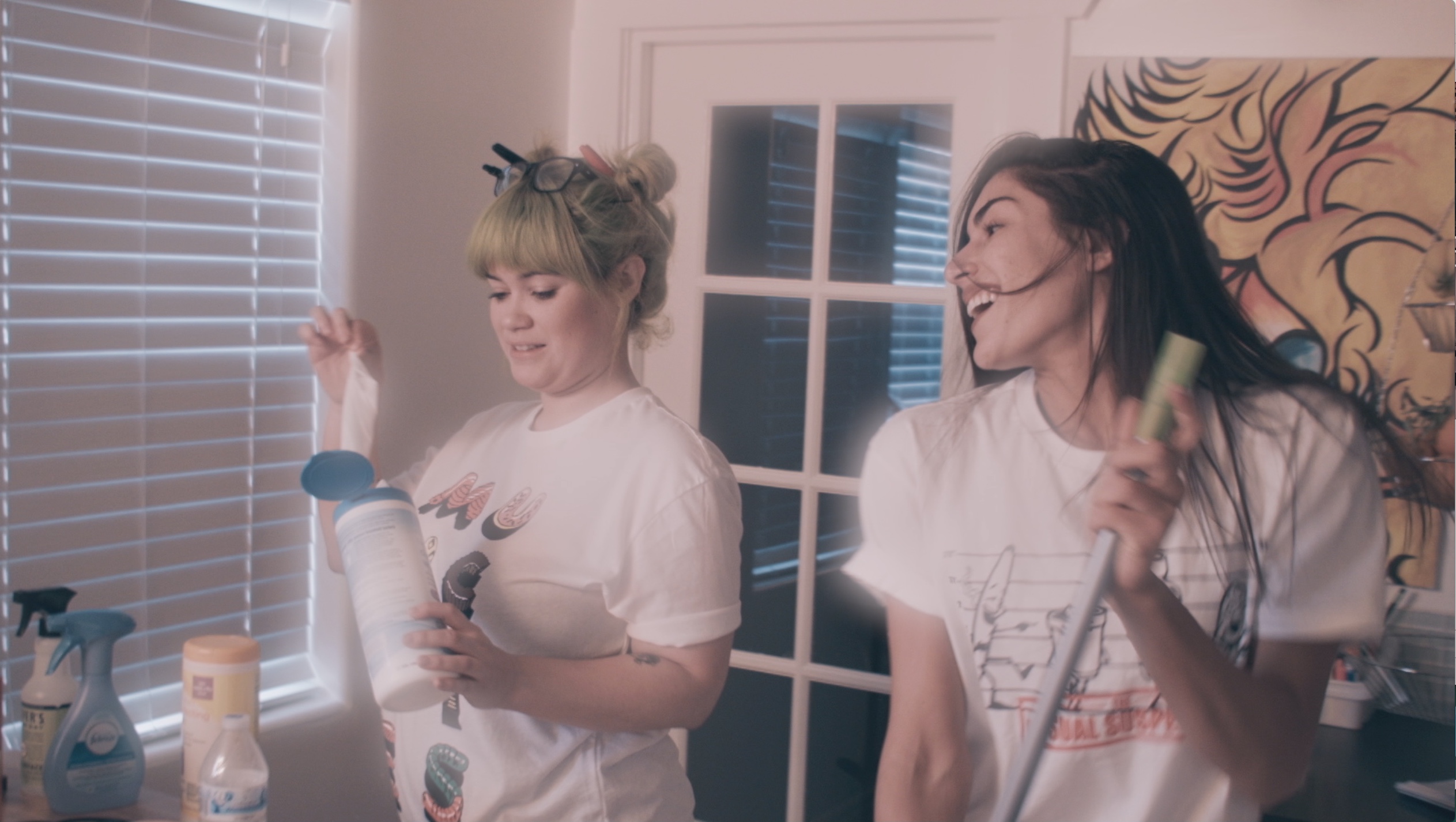 The fourth episode, “Nudes,” is one of my favorites. Crystal daydreams about what she’d love to do if she ever found her own leaked nudes online (if they existed… and be honest, you’ve thought about it too). Kicking back to the first episode and modern dating, nudes are a whole other level of drama that you can’t really avoid these days. Many dudes on dating apps will send women unsolicited dick pics, and honestly, nobody is all that shy about asking for nudes anymore. Like, remember when we lived in a time when “send nudes” wasn’t a meme? Or a time when we didn’t have Internet memes? Or a time when we dated without the Internet?

In the fifth episode, “Parking,” we welcome cousin Hasi to LA! Not everyone is lucky enough to see an episode of public masturbation on their first day, but rest assured, you’ll see one at least once in the City of Angels, and it’ll take a lot to erase that memory. One of my favorite things about making Crystal was not fully defining the fantasy scenes versus the reality scenes, because that’s how my brain works a lot of the time. I don’t feel the need or urge to spell out for people which are which. In many ways, this is the show I really wanted to watch when I was in my 20s, but didn’t have, so I’m making it for all the 20-somethings who can relate.

Real talk: breakups are tough, but protecting your food from your dramatic roommate is tougher! At the very end of the season finale, called “Human Shield,” we see Crystal gradually realizing that she needs to deal with the thoughts and feelings around her breakup. This is the kind of stuff that you don’t really confront head-on in your 20s because… well, you’re in your 20s, and you can kind of skate by without really dealing with it in the moment. It’s only when you get a better idea of what you want or don’t want in your life that you can process things like breakups – and other disappointing or challenging life situations – in a way that is constructive and helps you move forward. Crystal isn’t quite at that stage yet, but she’ll get there.