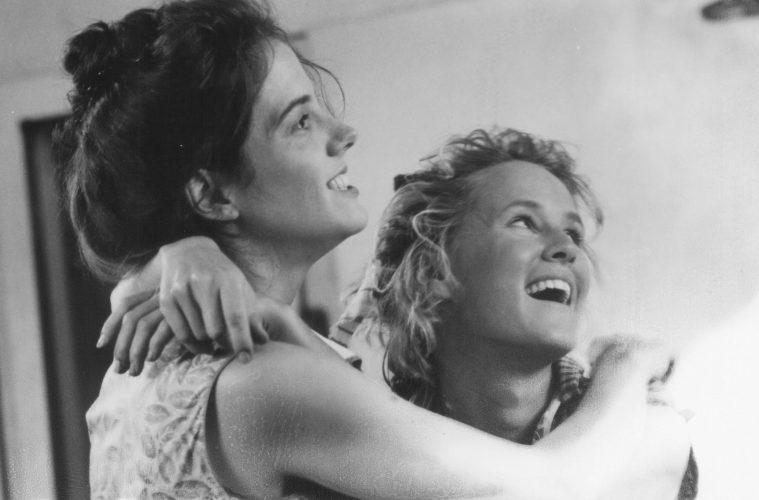 “Tell Me the One About the Lake”: Storytelling and Community in ‘Fried Green Tomatoes’

Framing narratives, and other stories within stories, are central to the long history of cinematic and literary storytelling. The eclectic assortment of stories in Geoffrey Chaucer’s The Canterbury Tales is held together by the framing narrative of a pilgrimage to Canterbury. Far more recently, one can turn to Citizen Kane, where the story of Kane’s life slowly unfolds through a young journalist’s quest for the meaning behind Kane’s last words. The cult classic, The Princess Bride, is another example, where the story of Westley and Buttercup is read by a grandfather to his sick grandson. Beyond providing a chance to present and contain the story to the audience/reader, framing narratives offer a unique opportunity in which to consider the role and power of stories. How do we tell stories? What does it mean to tell them the way we do? Framing narratives also serve to connect the diegetic audience within the film to viewers, crafting communities of listeners/viewers in the mutual, shared experience of the tale.

One such example of a powerful use of a framing narrative is in Jon Avnet’s 1991 film, Fried Green Tomatoes. The film unfolds in two different eras. The first framing narrative is that of Evelyn Couch (Kathy Bates), an unhappy housewife in modern-day America, struggling with her marriage, her weight, and menopause. On a trip to a nursing home to visit her husband’s aunt, Evelyn stumbles into the elderly Ninny Threadgoode (a lively Jessica Tandy). Ninny, hooking Evelyn with the opening lines, “Idgie was a character alright, but how anyone could have thought she’d murdered that man is beyond me,” eagerly launches into the story of her family. It is through Ninny’s words that the viewer is brought into the second part of the film – of Ruth (Mary-Louise Parker) and Idgie (Mary Stuart Masterson), in the 1930s. The rest of Fried Green Tomatoes is spent bouncing between these two storylines as Ninny slowly crafts the story behind the murder.

While Evelyn’s framing narrative can feel tedious at times, as we grow eager to return to Ruth and Idgie, one can see the incredible impact that stories and supportive female communities have on her. When we first meet Evelyn, she is attending a variety of seminars on bringing the spice back into her marriage, including a class on reclaiming female power by examining the “source of the power” – her vagina. Yet these seminars only serve to make Evelyn feel more disillusioned about her marriage and her body. It is only in hearing the story of Idgie and Ruth, two young women blazing their own way in the world, that Evelyn finds the confidence and spirit she needs to take control of her own marriage and identity.

Two contrasting scenes set in grocery store parking lots demonstrate the incredible changes Evelyn undergoes throughout the film. In the first, taking place early in the film, Evelyn is pushed rudely by a young man as she is leaving the grocery store. When she attempts to confront him outside, he calls her “fat cow” and “old bitch.” Evelyn’s paper bag rips as he drives away, leaving her to cry in the rain, struggling to gather up her groceries. Evelyn immediately visits Ninny at the nursing home in tears, finding in Ninny a friend to support her and talk her through the effects of menopause. Later in the film, after Evelyn/the viewer hears of Ruth and Idgie’s café and the night of the murder, Evelyn once again has an encounter with teenagers in a parking lot. In a delightful scene, two young women steal a parking spot Evelyn has her eye on, laughing and saying, “Face it lady, we’re younger and faster.” Gripping her hands on the wheel, Evelyn smiles, and invokes Idgie’s battle cry of “Towanda.” Laughing, she proceeds to repeatedly ram her vehicle into the little red sports car. When the two girls return, screaming, Evelyn smiles: “Face it girls, I’m older and I have more insurance.” Confronted with her husband that night, who says, “Well honey, what I can’t understand is how in the hell you could hit someone six times by accident,” Evelyn tells him not to make such a big deal about it. In the stories of Ruth and Idgie, and in her friendship with Ninny, Evelyn finds the support and confidence she needs to take charge.

In addition to the transformative power of stories within the framing narrative, stories and relationships between women play a key role in Idgie and Ruth’s own plotline. As a young girl, Idgie is coaxed down from a tree by a story from her charismatic older brother, Buddy. Shortly thereafter, in courting Ruth, Buddy tells another story. This story, of a lake that once existed in their backyard before it froze with a bunch of ducks on it, and was then flown away to somewhere in Georgia, is repeated throughout the film. After Buddy’s death, the story of the lake and the ducks becomes Idgie’s tall tale of choice to comfort and amuse others. The portions of the film devoted to Idgie and Ruth also celebrate the importance of female relationships and communities. Ruth helps Idgie through her loss of her brother, and Idgie repeatedly rescues Ruth from her abusive husband. The two women find meaning in each other, working together to create the Whistle Stop Café. Their friendship quickly blooms into something more. While the film fails to explicitly state Idgie and Ruth’s romantic attachment to one another (although both actresses wanted it to be more clear), it is hailed today as a lesbian classic.

Stories are mighty powerful things. There is a reason that so much of the discussion around diversity in cinema revolves around the importance of how minorities are represented. As the oft-repeated phrase, “You can’t be what you can’t see,” reminds us, the narratives told by society can shape lives. Fried Green Tomatoes is a vivid portrayal of the power of stories and female storytelling communities. Through the character of Evelyn, one can literally see the transformative powers of positive narratives. Despite failing to explicitly represent Ruth and Idgie as gay, the film still demonstrates the role that positive representations of minority groups can have on all members of society. It is the story of two lesbians that galvanizes a middle-aged housewife into a confident version of herself. The framing narrative of Fried Green Tomatoes is more than a simple, convenient method of organizing the film. Through Ninny’s tale of Idgie and Ruth, and their deep love for each other, Evelyn finds both the support she needs and the confidence to offer support to others. Through friendships, romance, and shared stories, the women of Fried Green Tomatoes rewrite their lives and chart their own narratives.