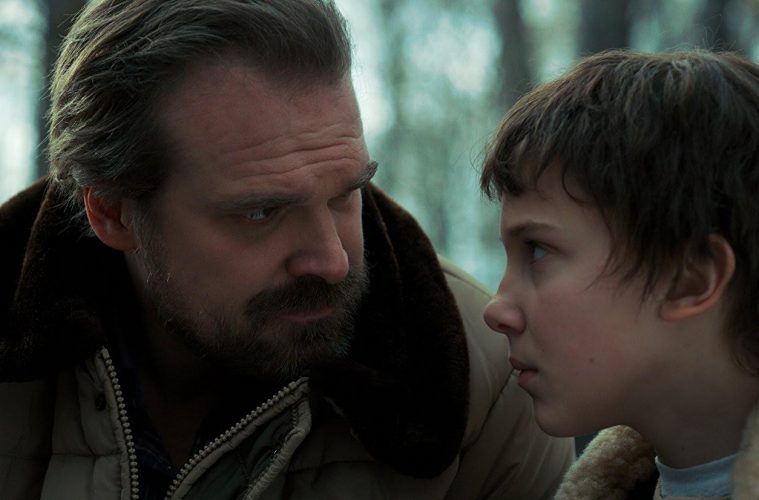 Before even diving into the second season of Netflix’s groundbreaking hit Stranger Things, fans were relieved to know that Eleven would be back. Based on the season two trailer and various promotional campaigns prior to its release, it easily became the worst kept secret of the season.

Little did we know, Eleven has been in Hawkins this whole time. The girl with the psychokinetic abilities made her glorious return almost immediately after the events that occurred late last season. Instead of letting her friends know she survived, which might have put them in danger, Eleven believed it was safer to hide out on her own. But forget the Upside Down, the Demogorgon, and the bad men this season. Eleven is faced with her truest test yet: finding where she belongs in the world.

About a year has passed since we last saw the residents of Hawkins, and everyone is still deeply affected by the horrific happenings of season one. Deaths, disappearances, and a number of unanswered questions continue to haunt all involved. Will Byers is not only dealing with being alienated as “Zombie Boy” by his classmates, but he is suffering from adverse side effects after being targeted by the new, ominous Shadow Monster. As Will’s closest pals and much of the cast are out looking for answers about the current happenings plaguing Hawkins, Eleven is on a solo journey to investigate her past and find a place she can call “home.”

I was pleasantly surprised to learn that it was Chief Jim Hopper who provided Eleven with a safe place to stay after all this time. He not only provided the young girl shelter, but also set her up in a secluded and fortified cabin to keep her safe from any of the investigators. Of course, living in seclusion for so long causes some tension, which eventually boils over between Eleven and her rescuer. As a result, Eleven finally decides it is time to ignore Hopper’s rules, and sets out on her own to look for answers regarding her family.

We know from the first season that Eleven was raised in a lab and refers to a man in charge of the experimentation as “Papa,” though he is far from an actual father. Joyce and Hopper had uncovered details regarding Eleven’s birth mother, but viewers are given even more insight this season. After the visit with Eleven’s mother, Terry Ives, Hopper learns she is no longer mentally there. He then decides to save the young girl from more pain and tells Eleven that her mother is no longer alive. After finding out the truth and feeling betrayed, Eleven sets out to meet her mother and heartbreakingly realizes that she is in no state to care for her. As Terry remains catatonic from the punishment Dr. Brenner delivered from trying to out his illegal testing and kidnapping, Eleven learns she can still communicate with her mother through her powers. Eleven (aka Jane) finally receives insight into her history, as tragic as it might be. Her Aunt Becky provides her with a chance to come live with them, giving her a new chance at a “home.” Similar to what many of us face in the real world, a long-lost family bound by blood may not provide the wholesome feeling that Eleven needs.

Through Eleven’s visions from her mother, she learns about another young girl who, like herself, was taken at an early age by Brenner and held at the lab. The revelation takes Eleven to Chicago, as she sets out to meet the girl that she considers as a “sister.” The girl, 008, is actually named Kali. Kali has the power to manipulate people’s minds but she is using that ability to get revenge on anyone who wronged her and her outcast friends. Eleven and Kali share a few sweet moments where the two reveal their pasts and consider themselves whole now that they have found each other. The problem is, Eleven and Kali are on different paths in life. Kali is using her past as motivation to fight but Eleven is trying to build a life and find a home for herself. Although the two will always have a unique connection, they are looking for something very different.

Eleven spends much of the season searching for the family she never had, but she actually had one all along. It might not consist of her birth parents or actual siblings but the relationships she gained in Hawkins were certainly life-changing. Mike, Dustin, and Lucas all serve as important members in Eleven’s newfound life. They might not have had a lot of screen time together this season, but there is no doubt that their everlasting bond will continue to grow. We may not be able to relate to some of the supernatural situations in Stranger Things but we can definitely relate to the friendships. Many of us are lucky enough to find friends who we consider family.

Everything Eleven has done for Will and the Byers family will also make her a welcome member as they remain eternally grateful. Just looking at how Joyce embraces Eleven after she finally reunites with the group shows how much admiration they have for each other. The moment she walks into the Byers family’s house at the end of the eighth episode, “The Mind Flayer,” shows that she is the missing piece to the puzzle, but that the puzzle happens to be the family she has been piecing together.

Eleven isn’t the only one looking for a place to fit in this season as unconventional relationships become a clear theme throughout. Steve and Dustin feel like outsiders within their groups and form a close bond. The duo became a fan-favorite for their surprising teammate and brother-like relationship. Newcomer Max also has a tough time finding her place within the group but eventually becomes a prominent member. But it isn’t just the kids looking for meaningful connections.

Hopper lost his daughter and although nobody will ever fill that void, he can certainly step up as a father figure for Eleven. The two have a beautiful heart-to-heart that is reminiscent of a father-daughter moment as they come to terms with their recent behavior. Things get even sweeter when we learn that Eleven will officially become Jane Hopper after Dr. Owens pulls some strings to change her identity so she can live a normal life. A stable life and a family of friends will give Eleven the chance at a bright future. We can expect that her mother, aunt, and even Kali will return in some capacity, but it will be Hopper who provides her with an actual home and a chance at surrounding her with the family she has always been searching for.