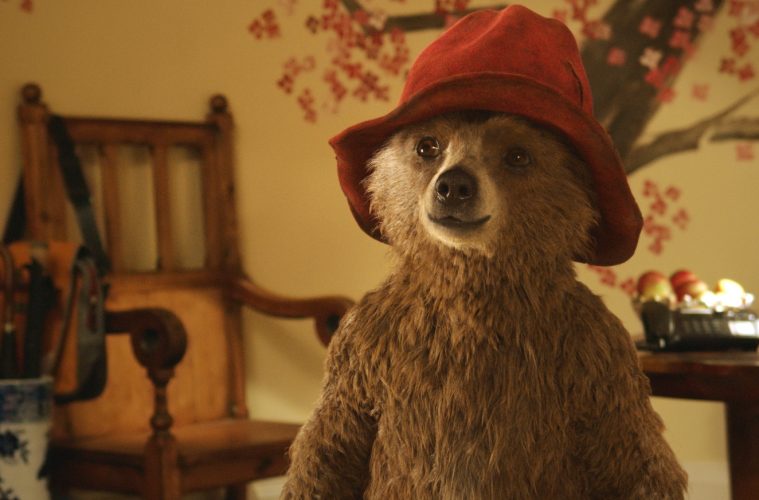 Wild animal habits are often played for comedic effect, but the newness of the “civilized” world keeps them in connection with child readers, who also learn the virtues and failings of an organized world. Also like his monkey and elephant peers, Paddington’s journey to the big city starts with a trauma. All these stories, originally published in the first half of the 20th century, somewhat ignore the stickiness of an “uncivilized” but anthropomorphized animal from the global south leaving his home because his family unit has been disrupted – by colonial violence in George and Babar’s cases, and by romanticization of the colonizer in Paddington’s case. The recent film adaptation of Paddington, however, examines trauma in a new way. It explores how trauma can act as an adhesive that binds family units, both genetic and chosen, and how trauma defines how we take in the world.

Author Michael Bond was inspired by newsreels showing children evacuating London with labels around their necks during World War II. Accordingly, Paddington Bear is found at a train station with a label around his neck, reading: “Please look after this bear. Thank you.” This backstory is first alluded to in the film by Paddington’s Aunt Lucy as she sends him off to London after Paddington’s other adoptive guardian, Uncle Patsuzo, dies in an earthquake in Darkest Peru. As she places a luggage tag around Paddington’s neck, Lucy tells him, “You know, there was once a war in the explorer’s country. People in England sent their children by train with labels around their necks, so they could be taken care of by complete strangers in the countryside where it was safe. They will not have forgotten how to treat strangers.” Paddington finds out that Lucy’s view of London is a bit idealistic, and he is initially ignored by busy Londoners.

Trauma manifests through the film when there is a disconnect between experience and narrative that cannot be reconciled by the family unit. Lucy and Paddington grieve Patsuzo together and Paddington takes on the trip to London with aplomb. The first moment that Paddington seems unsure of how to handle himself is after arriving at Paddington Station and being unable to begin a conversation with any of the commuting Londoners. But as he sits on his suitcase, alone, he notices the Brown family and is able to re-center himself. They take him in on a conditional basis, and the rest of the film shows them negotiating their own traumas as a unit, with Paddington becoming a part of this unit by helping them.

Creating art can help express our trauma, but interaction with art can also help process it. Semiotician Roland Barthes developed the concept of a punctum in his work on photography, Camera Lucida, and borrowed the language of trauma to explain photography as an art form. Barthes argues that photographs, often seen as reflections of truth, actually have two frameworks of understanding for the viewer. The studium reflects our cultural reading of a photograph – the historical details that might provide at least a way to see objective truth to the photograph’s meaning, even if the truth we land on turns out to be false. But the punctum is what captures the viewer, a detail that “pierces” them. (The Latin word for “point” comes from the Latin verb for “prick, puncture, sting,” so trauma is built into the etymology of the word.)

For Barthes, the trauma has to be personal. An upsetting photograph does not guarantee a punctum. The presence of a punctum demands the consideration of the subjective truth of what seems to be an objective art form – specifically the subjective truth of the viewer of the artwork. Another way of understanding the difference between the studium and the punctum is the origin. The studium reflects what the photographer captures and sees, but the punctum only exists for the viewer of the still frame.

To apply this to Paddington, we must look at the film within the film – a documentary short that plays during its opening. In the film’s universe, the short is a production by a British explorer who documents meeting Paddington’s Aunt Lucy and Uncle Patsuzo. The film establishes the bears’ abilities to learn human language and the genuine, shared affection between the bears and the explorer. The function of the documentary is the same in-universe and in Paddington as a whole: to provide context around the world of Darkest Peru and the explorer’s meeting with the bears who live there.

But then the film is shown to viewers of Paddington again, as Paddington and the Browns watch it after they’ve absconded with it from the archives of the Geographer’s Guild. This time, roles of viewers have mutated. The Browns have taken our spot as viewers for context. Their experience, like our initial one, will be defined by the studium of the short documentary. As viewers of Paddington the film, we are now really viewers of Paddington the character as he watches the short film, and the camera emphasizes this shift. Whatever context the Browns are getting is the studium, which the explorer depicts in his short documentary. But Paddington, seeing his destroyed home for the first time since he left Peru, seeing now-deceased Uncle Patsuzo and retired Aunt Lucy, and confirming that the explorer did exist, allows for Paddington to have a punctum. Paddington depicts this “pricking” of Paddington and what he is bringing to the film reel by blurring the lines of reality – having Paddington “enter” the black and white film and be transported to Darkest Peru in color. The film proves the explorer’s existence, which heretofore had been denied by the Geographer’s Guild. Paddington thinks that the explorer will give him a home. What actually gives him a home and a family is the Browns, who unite to save Paddington from the explorer’s daughter, embittered by her father’s refusal to stuff Paddington’s family for the museum.

The Browns have their own minor trauma to deal with as Paddington busts into their lives. Mr. Brown lives in terror that his family might be injured in any way, to the point where he ignores his children and wife in place of protecting them. The son, Jonathan, has to hide his interests in chemistry and rockets because of his father’s fear of injury. Mrs. Brown wants desperately to be close to her children but finds her oldest, Judy, growing away from her and she has trouble negotiating what a relationship between a mother and a teenage girl looks like. Judy, constantly embarrassed, wants nothing more than to leave her childhood home and be treated like an adult.

During their saving-Paddington-from-the-explorer’s-evil-daughter escapade, all five members of the Brown family find use in their special skills and support each other in these efforts, redefining their roles in the family unit. Judy recalls that they can enter the museum through the sewers, a fact that Mrs. Brown discovered while researching for a children’s book she is writing, and one that Judy rolls her eyes at earlier in the film. The pyrotechnics-obsessed Jonathan is able to use his chemistry skills to explode a locked manhole cover, with the blessing of his risk-averse father, who daringly traipses along the outside of the museum to find Paddington. Mrs. Bird, the live-in elderly relative, is left to her own devices after being tut-tutted for most of the film to drink a security guard under the table. The family saves and adopts Paddington and the film ends with a summation that shows the Browns happily together, not as they were, but as transformed individuals on the other side of a crisis.

When my mother and I first saw Paddington, we also were in a state of transition, managing the trauma of negotiating new roles with each other. My father had moved across the country for his job, while my high school-aged sister and my mother stayed in my hometown. As an adult child, I returned home, partially to help out the family and partially because I needed help. We were all figuring out how to interact with each other as adults who still desperately craved support during the most uncertain time in our family.

As I watched the film, I felt about a dozen little puncta that linked my personal and familial mythology to the film. Paddington’s marmalade lurched me back to spreading marmalade on toast to share with my mother when I was little. The pneumatic tubes in the Geographer’s Guild archive system immediately reminded me of my twin brother, long since moved out of my parents’ home, and his mechanical childhood inventions that decorated our rooms. When the Browns take in Paddington and start to warm up and their wardrobes change from dreary neutrals to bright primaries, something in my heart clicked with warmth.

On the surface, Paddington is not that spectacularly different from any other children’s movie. The message is about loving your family because they’re your family, letting them be who they are, and taking joy where you can find it. But the experience of watching it with my family in the face of a transformation and recognizing together elements of our family in the film led to the union of Paddington and my soul, different from the way that I am nostalgic for films from my childhood. Paddington was a venue for me to explore the importance of my family in the transformation of my role from child to adult.

At the soul of Paddington is a child-coded character who tells the adults around him that things are going to be okay. He needs to be taken care of, but also helps the adults of the film relearn how to be silly and fun. The liminal space of Paddington’s character lends itself to acting as a simulacrum for fluid and changing dynamics. Watching this with my mom in the period of my life when we were both learning how to define our relationship as two adults, while also maintaining the child-parent relationship we had had for 23 years, it felt as if the puncta were piercing us to pull us closer to the film, but also to each other.