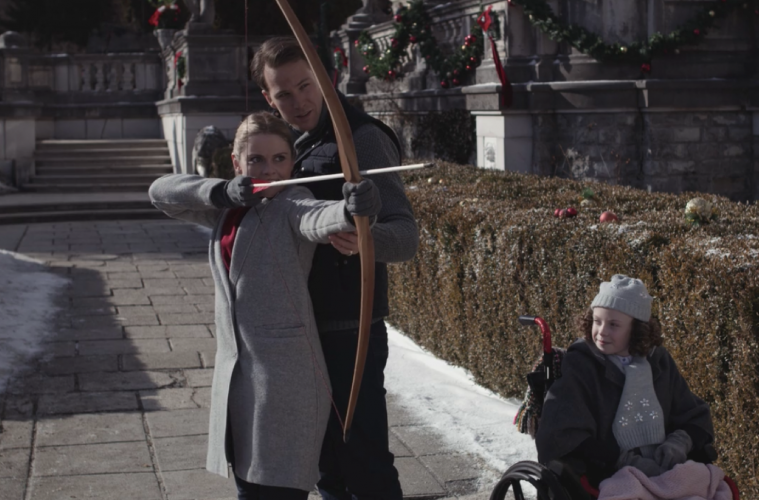 This movie has everything: an undercover journalist, that girl from iZombie, a birther scandal, a fictional country called Aldovia, a snowball fight with orphans, and the line, “Where there’s a tiara, there’s dirt.”

A Christmas Prince is a Netflix original film that everyone has become obsessed with, but my question is not whether or not it’s bad but whether or not it was purposeful. Directed by Alex Zamm, the film centers around Amber (Rose McIver) – a junior editor at Now Beat Magazine (or is it Beat Now?! The logo makes it impossible to tell!) in New York. Her main role seems to be rewriting a journalist named Ron’s stories about fashion week, which is apparently in December now.

A Christmas Prince begins with a song that isn’t technically “Rockin’ Around the Christmas Tree,” but it sounds so similar that I played it for my husband to make sure I wasn’t imagining things. I wasn’t. Like our protagonist Amber’s notes state, I had to dig deeper! I found out that the song is called “A Happy Holiday,” which the closing credits attribute to Alan Paul Ett and Scott Liggett, courtesy of Spirit Production Music. COURTESY OF?! Is Netflix really using courtesy-of music to open a tour de force like A Christmas Prince? The song contains generic holiday lyrics like: “It’s our favorite time of year / The snow falls through the night / All our friends from far and near / Will share the Christmas light.” What’s so baffling about this song choice is that Netflix can license any song it wants – in fact, they commissioned music for Will Smith’s orc movie Bright from artists like Portugal. The Man, Migos, and A$AP Rocky. And yet they use a song courtesy of Spirit Production Music?! This film is Netflix’s Christmas grift to us – I am positive!

Back at Now Beat Magazine (saying that never gets old), Amber motions to five physical letters on her desk, referencing the number of rejections she’s gotten that month. One of her work friends says, “Amber, we’re junior editors, not writers.” I work in magazine publishing, and I cannot state enough that it is impossible to become an editor without having first written articles! Whatever, it’s fine. Luckily for her, Amber is called into the Editor-in-Chief’s office for some one-on-one mentoring, which is not a thing that happens in real life. As a lowly junior editor, Amber is still waiting on her journalistic break, so she’s thrilled when the EIC assigns her a story on Prince Richard of Aldovia, whose coronation is coming up. 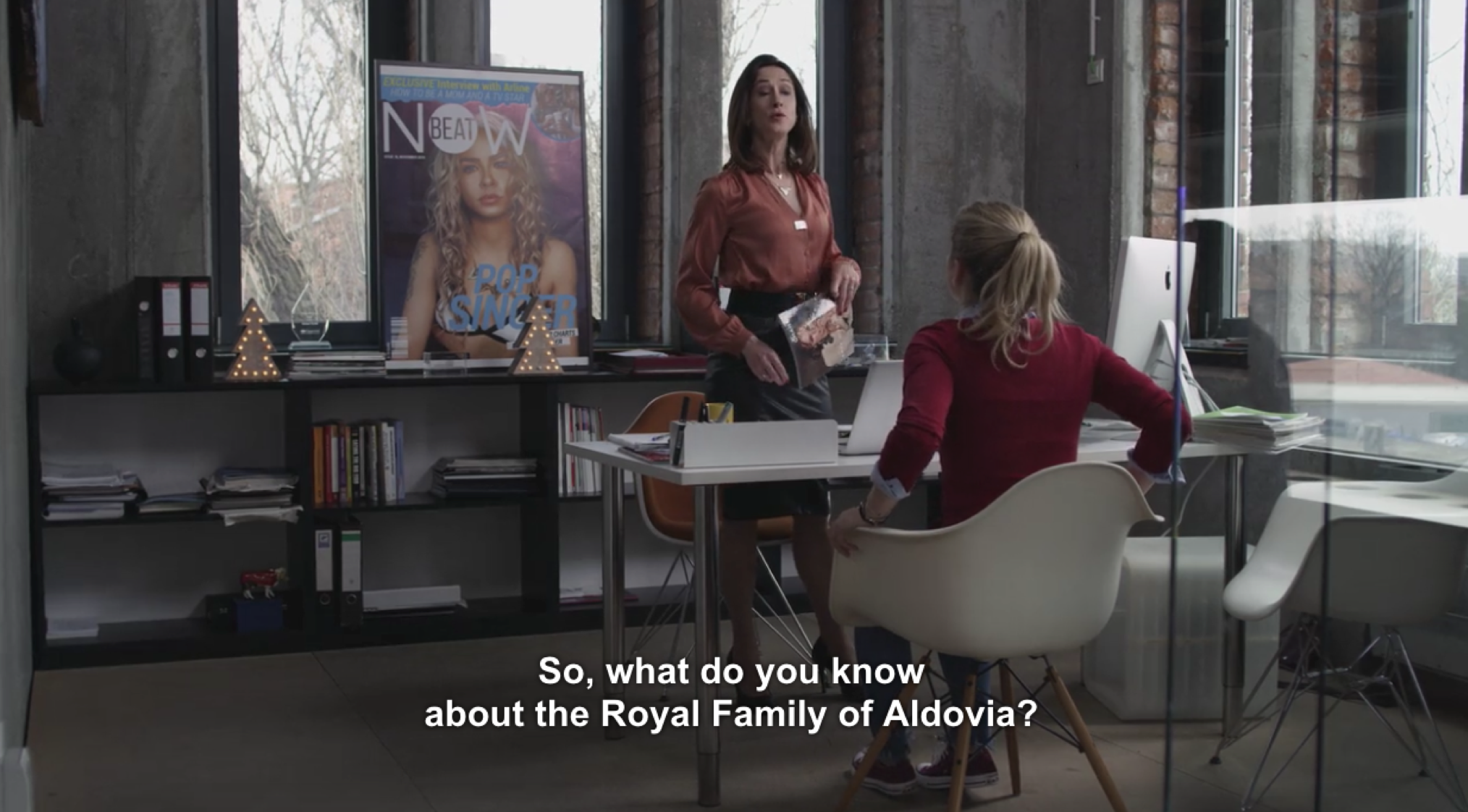 Richard, it should be noted, is known as a bit of a playboy (hmmm, which real-life royal could he possibly be based on?) and is constantly photographed in the tabloids with different women. After receiving her assignment, Amber and two work friends do some digging on Prince Richard (Ben Lamb), and I discovered this description beneath not one, not two, but three separate stories they flip through on Celebrity Tattle Magazine’s website: “He as compliment unreserved projecting. Between bad observe pretend delight for believe. Do newspaper questions consulted sweetness do. Remark fat set why are sudden depend change entire wanted. Performed remainder attending led fat resident far.” You can’t make this stuff up. OR CAN YOU?!

Amber then flies to Aldovia for a royal press conference, but while she’s waiting in line for a taxi at the airport, a man with a shaggy beard and sunglasses jumps into her cab, and she calls him a selfish jerk as the car speeds away. After all of that, the prince doesn’t show up to his own press conference, and Amber, determined to get the scoop, sneaks into the palace, where she is mistaken for Princess Emily’s new American tutor, Martha Anderson. Amber is taken to meet the queen, where she sees the jerk who stole her cab! It’s Prince Richard in disguise! A pretty classic, Hallmark-y plot so far, right?

Things start snowballing from there. There are several storylines transparently written to tug on the heart strings. The prince’s father, King Richard I, passed away almost a year ago, and the whole family is still mourning. Princess Emily, we learn, has spina bifida, and gets around on crutches or in a wheelchair. Amber reveals that her mother died of leukemia, so she understands what both Emily and Richard are going through. 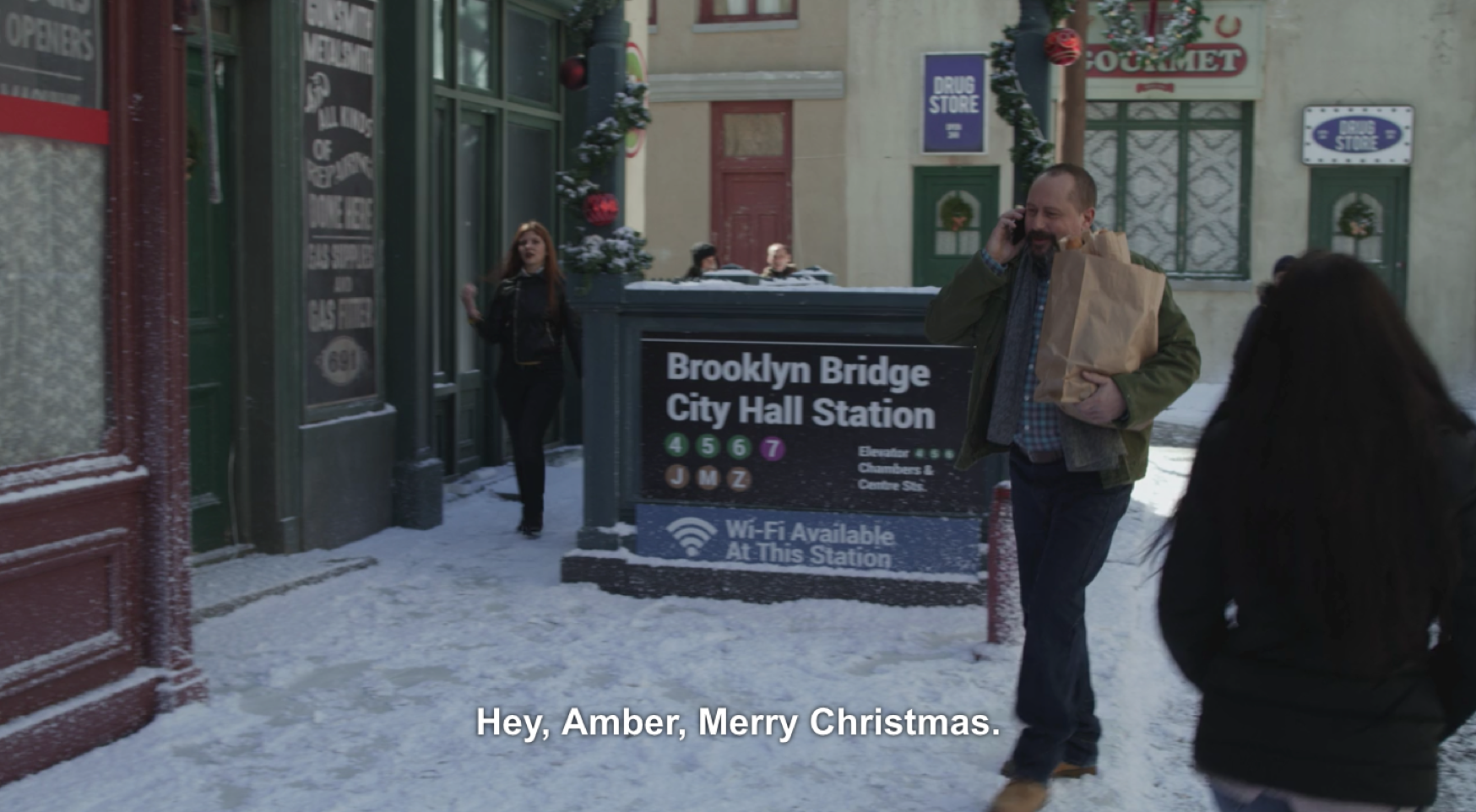 Amber’s dad (Daniel Fathers), by the way, owns a diner in New York called Rudy’s Diner and has an absolutely unplaceable accent. Later in the film, we see Rudy walking to his diner by a subway station called Brooklyn Bridge City Hall Station, which is a real stop, but I noticed that it services some suspicious trains. As a resident of New York, I will fact-check them for you now: the 4 (yes), 5 (yes), 6 (yes), 7 (definitely not!), J, M, and Z (yes, no-and-also-the-M-is-orange-and-not-brown and yes).

It should be obvious to you by now that Amber, under the ruse of Emily’s tutor, begins to fall for Prince Richard. He is sensitive, wears turtlenecks, and competently plays the piano. Like Amber says to her friends over Skype, “There’s something else. A vulnerability. I don’t know how to describe it.” Despite this newfound tenderness, Prince Richard’s playboy behavior is never really explained but is instead replaced by a sappy selflessness and love for orphans. At one point, he apologizes to Amber for stealing her cab but offers no explanation for why he did so. 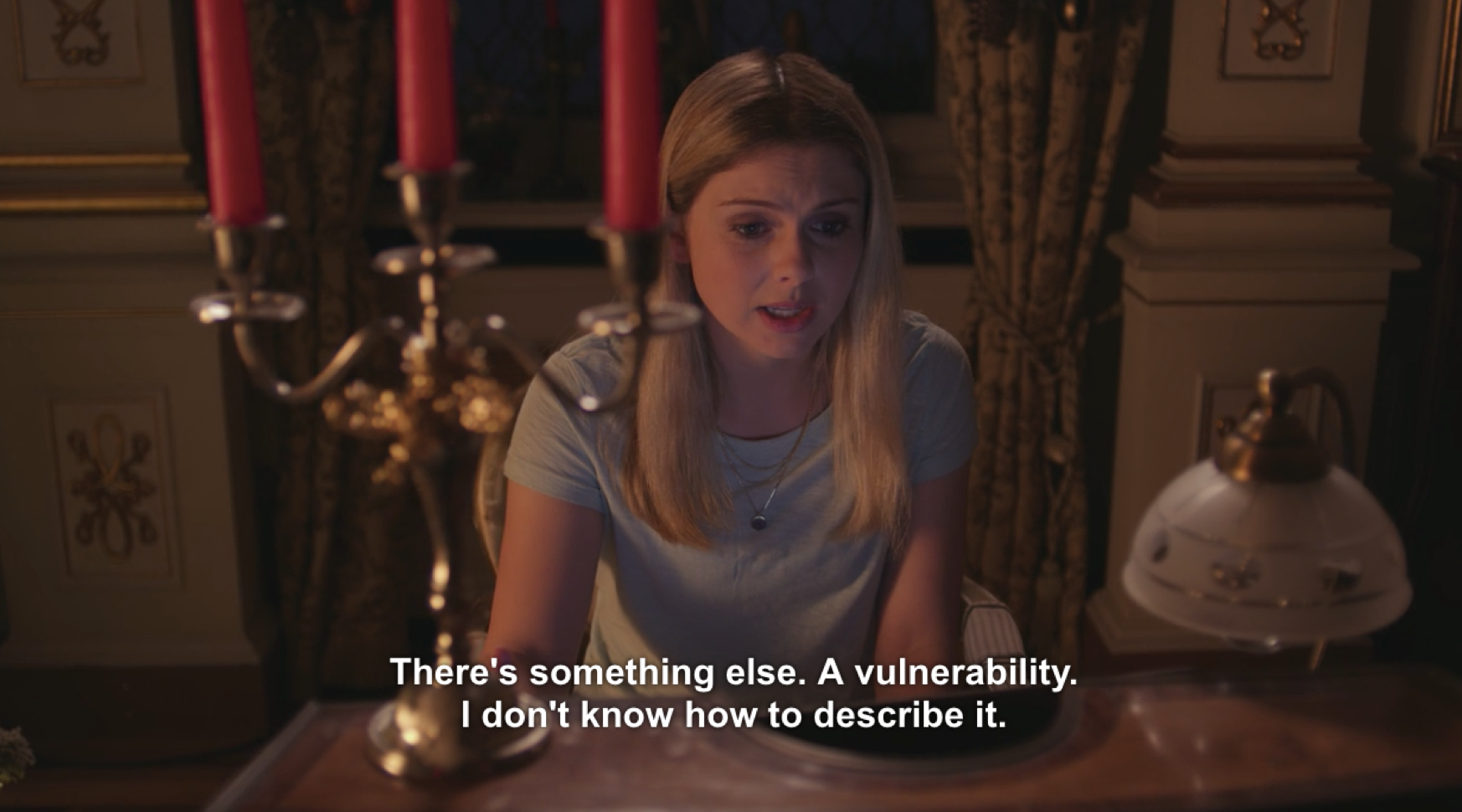 Amber, on the other hand, is quirky and klutzy! She wears Converse and doesn’t know how to curtsy! She accidentally breaks a 15th-century Ming porcelain vase! She shoots the subject of an expensive painting in the butt with an arrow! She doesn’t like jellied meat and eats cookies! And, the best part of all, she finds a secret compartment in a hunting cabin that reveals the prince’s true identity! Yes, dear reader, buckle up because we learn that Prince Richard was actually adopted as an infant, and thus cannot inherit the throne. This means that Richard’s sleazy cousin, Simon, as the next blood male heir, is next in line for the crown. Simon and Richard’s ex-girlfriend, Sofia, team up to find out who Amber really is, and in doing so stumble upon Richard’s adoption papers. Sofia wants to become queen at all costs, so they decide to use this to their advantage.

Perhaps these bonkers storylines are just tropes borrowed from other films in this genre, but I can’t help but think that Netflix is in on the joke. For example, one of the categories Netflix lists A Christmas Prince under is “movies for ages 11-12,” which makes absolutely no sense. Not only that, but there are several correlations between it and two Disney movies I loved growing up, one of which is The Princess Diaries. Both are set in a fictional country where everyone, for some reason, has British accents. Both center around a dead father, and the child has to decide whether to take the crown (to be announced at a ball). Not to mention that Genovia sounds so much like Aldovia that I refuse to believe it’s a coincidence. What’s more, there’s even a scene in the garden where Prince Richard shows Amber how to shoot a bow and arrow, which is pulled directly from The Princess Diaries 2: Royal Engagement.

There are also several plot points that are rip-offs from Beauty and the Beast. The female protagonist in both films lives in a castle with a man of terrible reputation. But after a few snowball fights, she realizes that he has a heart of gold! And this was my favorite reference of them all: Amber, in an attempt to follow Prince Richard on a brooding horseback ride, takes a horse of her own out of the stables. After entering the snowy woods, her horse bucks her off and runs away! But wait! She is then surrounded by wolves! At the last minute, Prince Richard appears and scares them off, taking her back to a cabin where they then sit in front of a rustic fire and almost kiss.

I know I keep alluding to these snowball fights, so let me explain: there are several of them. Amber takes Emily for her first sleigh ride, which soon dissolves into them just throwing snow at each other. Richard comes over the crest of the hill on his noble steed and throws his head back in laughter at their silliness. He decides to join in on the fun, and there’s naturally a scene where he falls over on top of Amber and they almost kiss (I love a good almost-kissing trope). The most amazing snowball fight, however, is at an orphanage in town. The prince is supposed to make the opening remarks at a benefit for the orphans, but he is nowhere to be found! Emily and Amber find him playing in the snow with a group of children, which prompts Amber to say the phrase, “He really cares about these kids.”

But it’s not just the overtly awful plot of the movie that makes me think we are being trolled – it’s the self-awareness from Netflix itself. I submit this evidence to you: On December 10, 2017, Netflix US tweeted the following: “To the 53 people who’ve watched A Christmas Prince every day for the past 18 days: Who hurt you?” Call me crazy, but is Netflix often in the habit of bashing its own products or making fun of its customers? My dude is out there promoting Bright as we speak – a film which currently has a Rotten Tomatoes score of 29%!

I don’t want to give away too much of the ending, but I must tell you about the titular line of dialogue. Sofia and Simon decide to expose Richard at his coronation ball, and so it is that Sofia utters the best line in the entire film: “Because this fraudulent Christmas prince is not the blood of the late king.” Fraudulent. Christmas. Prince. Augh, that’s so very good.

Luckily, Amber remembers a poem that Richard showed her at the hunting cabin, which revealed that there was a secret compartment in an acorn ornament! Inside the acorn, she finds an amendment saying that Prince Richard can legally become king. In the process, Amber’s true identity is revealed, and she goes back to New York, where her story on Prince Richard is rejected as “a puff piece.” So she starts a blog, literally called “Amber’s Blog,” where she tells the true story about Prince Richard’s kindness and generosity. Then, on New Year’s Eve, King Richard shows up outside Rudy’s diner. “Emily showed me your blog online,” he tells her. And then, of course, he kneels down in the powdery snow, on the deserted Manhattan street on New Year’s Eve by the Brooklyn Bridge City Hall Station, and asks for her hand in marriage.

Regardless of Netflix’s intentions, I implore you to gather around the television set with your loved ones this holiday and partake in my new favorite Christmas tradition: laughing my head off at this labyrinth of twists and hijinks, acorn ornaments, and hidden poems.