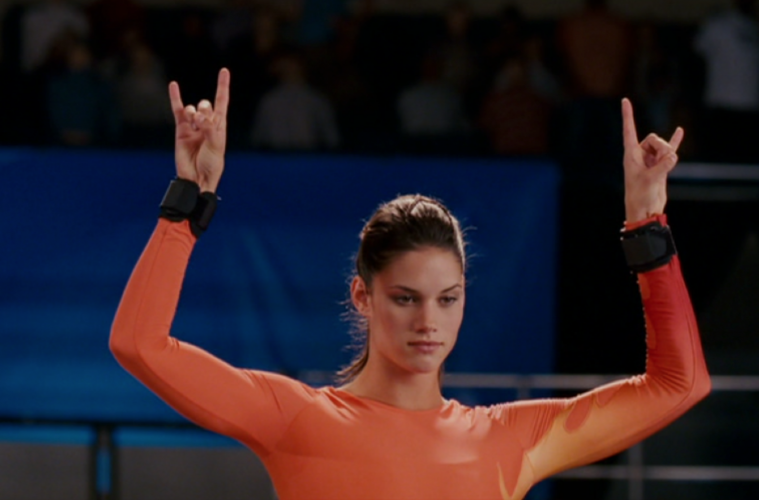 In the great tradition of sports movies, very few filmmakers choose to focus on gymnastics. Despite it being one of the most challenging, dynamic, exciting sports, and despite having been around since ancient Greek and Roman times, filmmakers tend to prefer narratives about team sports that showcase the athleticism and leadership skills of (typically male) superstar athletes and coaches – Moneyball, Remember the Titans, Field of Dreams, and The Mighty Ducks, for example. Off the top of my head, I can only think of three films about gymnastics: The Bronze (2015), A 2nd Chance (2011), and, perhaps the most popular gymnastics movie of all time, Jessica Bendinger’s Stick It (2006). Bendinger is best known for writing Bring It On (2000), another beloved teen movie that dramatizes the experiences of young female athletes, and her authorial voice shines through even more in her directorial debut, Stick It.

At the time Stick It was released, I was an 11-year-old competitive gymnast, and literally everyone I trained with quoted it incessantly for at least a year. Looking back on it 12 years later, I can see why we all fell in love with this movie. Stick It strikes a perfect balance between critiquing the unfair and often dangerous mental and physical strains of gymnastics, and demonstrating how friendship, hard work, and a sense of personal accomplishment make it all worth it. Sports like cheerleading, gymnastics, and figure skating are often culturally devalued, and this is at least partially connected to the fact that they are associated with femininity. Gymnasts and their fans are constantly faced with dismissive and disrespectful questions about this sport that defies logic and requires endless hours of training and mental fortitude. I know from personal experience that many people think gymnastics is easy, silly, and not to be taken seriously, because if a woman can do it – while wearing a sparkly costume, no less – then it must be so.

Stick It’s protagonist and narrator, Haley Graham (Missy Peregrym), repeatedly emphasizes in her voiceover narration how tough female gymnasts are, and how this sport should not be underestimated. After accidentally crashing her bike through a residential construction site, Haley is sent to Vickerman Gymnastics Academy (VGA) as punishment. In fact, Haley would have preferred the Texas Military Academy or juvenile detention instead of elite gymnastics training. In one voiceover, Haley states that the Navy Seals look weak next to gymnasts, who are expected to defy gravity and perform incredible feats of strength, grace, mental fortitude, and endurance, all while smiling and wearing glittery leotards. Haley’s witty voiceovers guide us through images of herself and her teammates training as she explains the ins and outs of gymnastics, all the while acknowledging how ridiculous it seems (“If you like running at full speed toward a stationary object… vault is for you”). Haley’s commentary reverses the power imbalance that characterizes televised gymnastics competitions, wherein sports announcers – most notably NBC’s Tim Daggett, Al Trautwig, and Elfi Shlegel – control the narratives that get told about athletes and their performances. By employing this cinematic device, Bendinger puts that power in Haley’s hands, allowing her to expose the difficulties, contradictions, and biases that exist between gymnasts, coaches, judges, and fans. 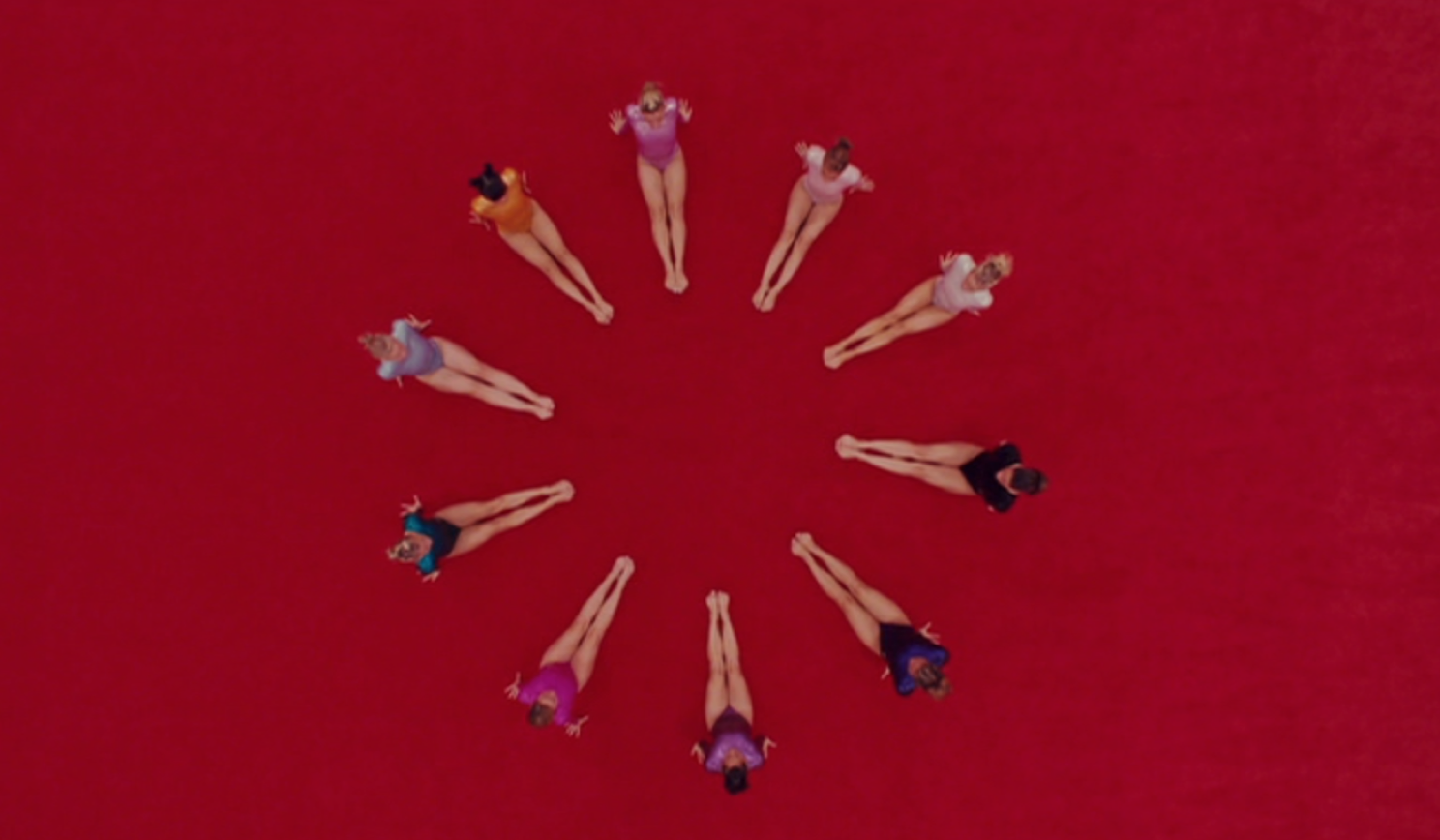 Stick It proves that cinema is the perfect medium for capturing the artistry and intensity of gymnastics. Not only do Haley’s voice-overs demonstrate female agency and control, but the film makes use of overlapping editing and coordinated costume colours and movements to emphasize the visual beauty of this sport. In real life, gymnastics enthusiasts only get to see gymnasts perform during competitions, and although slow-motion instant replays are common, the cameras are often placed far away from the competitors, and audiences are only privy to certain perspectives – both visually and in terms of commentary and description. As a fictional narrative film, Stick It allows access to training facilities, in-house competitions, and the athletes’ personal and social experiences outside of the gym. The camera often provides close-up views of gymnasts performing skills, emphasizing the difficulty and precision of their movements and confronting us with the physical strain of this sport. During the Classic competition, the camera moves in close on Haley performing a sideways handstand on the balance beam, slowing down her movements to focus in on her emotional distress at this moment. A tear rolls off her face and splashes onto the beam, heightening this already intense moment as the audience is aware of Haley’s insecurity and feelings of hurt after finding out that her coach is charging her parents extra money to train her. Typically, when an athlete appears distressed during competition, the announcers speculate about what is happening, sometimes unfairly. Stick It’s stylistic and narrative devices provide access to the gymnasts’ personal experiences and endow them with the power to control their own career narratives.

As I have been alluding to, there are many points of connection between Stick It and USA Gymnastics. In fact, the NBC Sports announcers appear as themselves at the National Championships, and Olympic champion Nastia Liukin appears as herself to perform an incredible uneven bar routine. Haley constantly critiques the unfair judging practices and abusive culture of women’s gymnastics, noting that “it doesn’t matter how well you do, but how well you follow their rules.” Haley decries the lack of innovation and strict rules that constrain athletes and make them feel that their best is not enough. These critiques seem particularly striking at a time when USA Gymnastics is in crisis after hundreds of gymnasts bravely shared their stories of sexual assault at the hands of former national team doctor Larry Nassar. Some of the most prominent gymnasts in the world – including Simone Biles, Aly Raisman, McKayla Maroney – continue to speak out about the abusive and dangerous culture of the gymnastics world, where Olympic gold is prioritized over athletes’ wellbeing. Haley and her teammates Joanne (Vanessa Lengies), Mina (Maddy Curley), and Wei Wei (Nikki SooHoo) express similar dissatisfaction with the world of elite gymnastics, where scores and training are valued over athletes’ autonomy and self-expression. 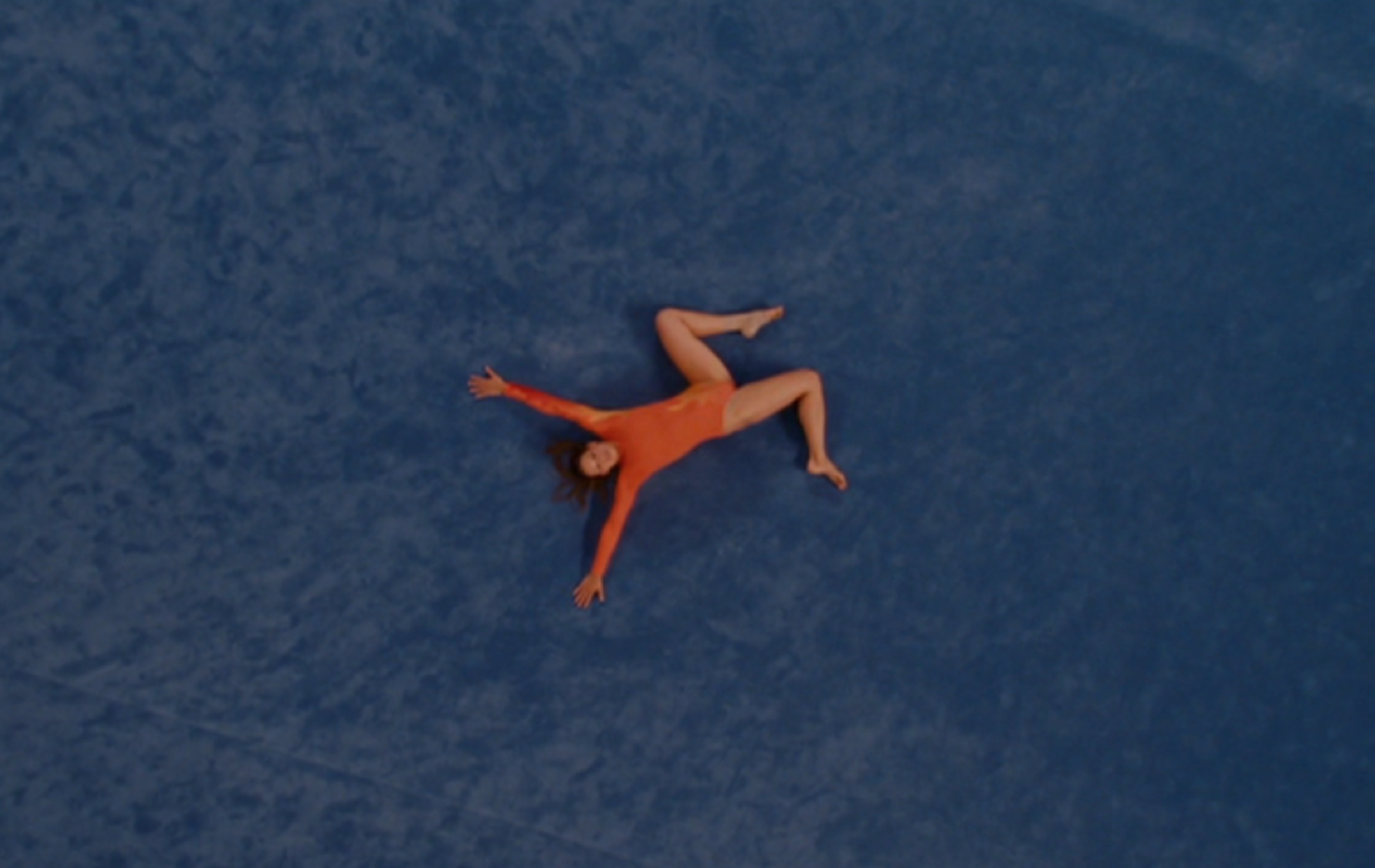 The climax of the film demonstrates what it would look like for athletes to forcefully take back the agency that they are constantly denied. After Mina performs a nearly perfect vault at the National Championships (front handspring to a double front tuck), the judges take 0.5 points off because her bra strap was visible, and an outraged Haley decides to revolt. She deliberately “scratches” – a term used to describe an incomplete performance – by pulling her bra straps out of her leotard, hopping on top of the vault, and flashing the judges the rock n’ roll hand gesture. There is no point in giving a perfect performance for judges who will always find even the tiniest mistakes in your routine. Joanne joins the protest, skipping and dancing down the vault runway with her bra straps visible, before licking her finger and touching the vault, then touching it to her butt. The gymnasts confer with each other and choose one athlete to perform on each apparatus, so they control who wins the medals. Nastia gives a flawless performance on bars, Wei Wei performs a hip-hop beam routine, and Haley finally gets her chance to redeem herself on the floor exercise, which she walked out of at a previous World Championships (after finding out her coach was sleeping with her mom). Haley’s final voiceover points out that the only rivalry in gymnastics is between athletes and judges, and that gymnastics provides a perfect opportunity for athletes to uplift one another and build friendships. Stick It dramatizes the tension gymnasts face between loving their sport and hating the way they are treated, and tackles this serious subject with a lightheartedness and humour that is still incredibly thoughtful. This film resonates with the current state of USA Gymnastics, and makes me wonder if the current National team also needs to find a way to “shake things up,” as Haley so eloquently puts it.