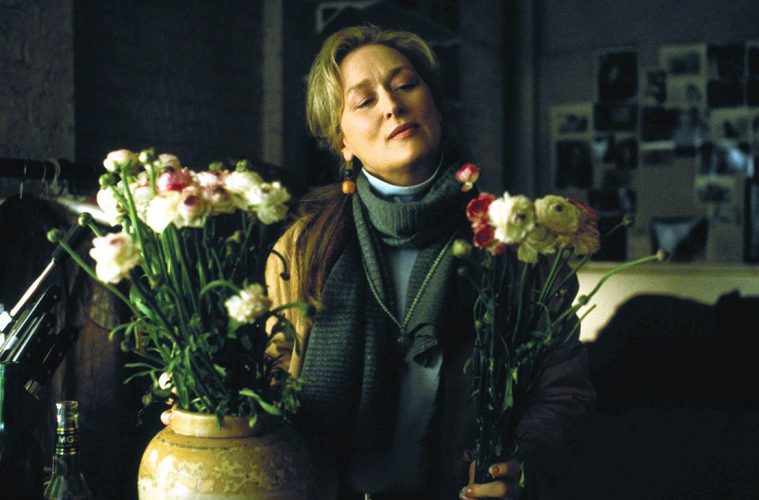 Our Year With Meryl

It was 2003 and I was 14 when I first saw The Hours. I left the theatre and took what felt like my first breath in almost two hours. That movie was an emotional gut punch like I had never experienced before. Beyond starring Julianne Moore, Nicole Kidman, and Meryl Streep (all I need in a movie!), The Hours is about that deep, permeating sadness you can’t quite put your finger on when you’re in it.

In what may be my favourite movie scene of all time, Meryl Streep’s character Clarissa is in the kitchen preparing for a big party she is throwing for her ex-lover/friend Richard, when Richard’s ex Louis stops in unexpectedly. She is listening to opera at full volume. There is a frantic energy as she cracks eggs and they talk. Seconds away from a meltdown, Clarissa tells Louis, “I don’t know what’s happening. I’m sorry, I seem to be in some strange sort of mood. It’s very rude of me,” and lets out a long exhale that’s familiar to anyone who struggles with anxiety. She continues, “I seem to be unravelling.” She grips the counter, clutches her stomach, crouches to the ground, and weeps in-between trying to speak and catch her breath. It is a symphonic performance, capturing fear, hope, melancholy, humour, kindness, loss.

This is the scene that unequivocally made me fall in love with Meryl Streep. I went home, made a list of all of her films, and started renting them one by one. I had my favourites then: Defending Your Life, One True Thing, Music of the Heart, Death Becomes Her. And I have my favourites now: The Bridges of Madison County, She-Devil, Heartburn, Ricki and the Flash, A Prairie Home Companion.

Two years ago, I received the best text message I’ve ever gotten. It was from Emily, an internet friend-turned-IRL pal. All it said was, “Do you want to start a Meryl Streep podcast with me?” “More than anything,” I replied, quicker than I’ve ever replied to anything in my life.

I had written for Emily’s website years ago. We were always friendly online or when we’d run into each other around the city, but we weren’t friends until I nervously asked her to hang out. On our first friend date, we went to see My Big Fat Greek Wedding 2 and had my favourite: margaritas and churros. Admittedly, our connection wasn’t immediate; we’re both shy and reserved and nervous around new people. But we kept spending time together, and a few months later, Emily sent me the text.

We launched our podcast, What About Meryl?, the following October, resulting in us watching and discussing a Meryl Streep movie every week for just over a year. I trekked to Emily’s apartment weekly to excitedly dive into how Meryl Streep became greatest-living-actress Meryl Streep. At the same time, we were doing something else arguably more valuable. We were slowly and carefully nurturing a friendship that would grow into one of my most cherished.

Personally, one of my best friends had semi-recently moved to England. We did everything together for two years and I was still deeply feeling her physical absence. We were inseparable, and as you get older, that level of friendship is hard to come by. Everyone’s busy! They’ve got dogs, partners, careers, babies, succulents! I get it! But to be honest, I didn’t really expect to ever find that bond with someone new again – which, okay fine, sounds a bit dramatic in retrospect. But as Emily and I kept talking about Meryl Streep movies, we kept getting closer. I could never replace my friend that moved away – the best and worst thing about people is that you can’t replace them – but this new friendship was starting to increasingly feel like, Hey, I think we’re in this together.

Episode after episode, we learned more about Meryl Streep and more about each other. We swooned over the sensuality of Francesca in The Bridges of Madison County, we suffered (and I mean suffered!) through Ironweed and The House of the Spirits, we agreed that she reinvented acting in Sophie’s Choice, we coveted her scarves and dog in Out of Africa (but not much else), we wanted Justice for Lindy in A Cry in the Dark. Emily found Silkwood and I found The River Wild. I love Ricki and the Flash and Emily doesn’t. Emily loves It’s Complicated and I don’t. We both love Julie & Julia (even the Julie parts).

You can learn a lot about someone by talking about movies with them. You learn about their pet peeves, their joys, the small things that make them laugh and cry. If you’re open to it, you even start seeing the world through their lens. Shared experiences bring people together, and I’m so glad our shared experience was Our Year With Meryl.

When we started our podcast in 2016, Meryl had 19 Oscar nominations and was about to receive the Cecil B. DeMille award at the Golden Globes. It felt like the perfect time to be revisiting her career, especially as so many people continued to ask, “Her again?” (hence the title of Michael Schumann’s 2016 book). When someone is an icon, it is easy to forget how they became that icon. Together, Emily and I rediscovered why Meryl Streep is the best of the best. She works hard. She is smart about roles, choosing layered characters in interesting movies. She elevates every project she is a part of. She proves that you don’t have to be mean to succeed – her colleagues have nothing but incredible words to say about her. And of course, her talent of becoming other people is unmatched.

My love affair with Meryl Streep is one of the strongest undercurrents of my life. I’ve been watching her movies for more than half of it, spending hours with the textured, difficult, funny, cool, smart women she has brought to the screen. I just never thought I would share these performances with anyone else in such a personal way. I also never imagined I’d get a best friend because of them.