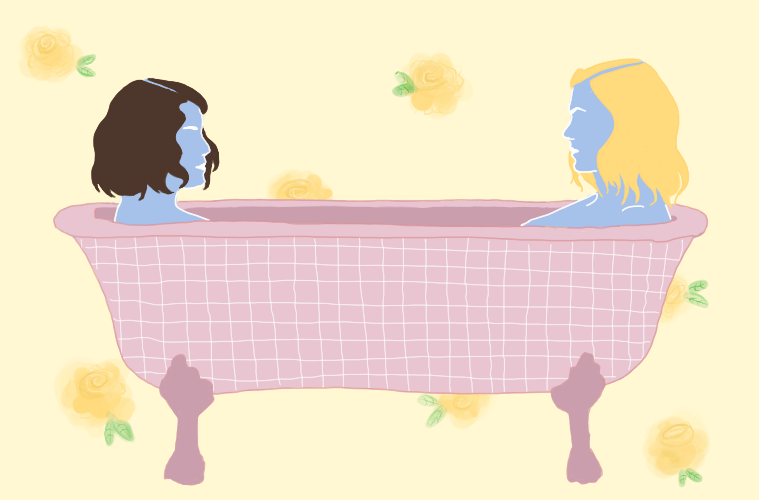 “It’s All Frightfully Romantic”: ‘Heavenly Creatures’ and the Dark Power of Imagination

Like most teenage girls, Pauline Parker (Melanie Lynskey) feels powerless. Suffocated by the tedium of her prim and proper girls’ school, all she wants to do is write stories. With her untamed, curly black hair, her hunched stance, and her downturned mouth, she’s like a storm cloud. Her life is irrevocably changed by the arrival of the new girl, Juliet Hulme (Kate Winslet, in her first feature film role). Glamorous, well-spoken, and confident, she’s already travelled the world with her parents. But Juliet, choosing the name “Antoinette” and smugly correcting her French teacher’s grammar, immediately marks herself as a rebel with a romantic streak. Pauline and Juliet’s friendship will both liberate and entrap them, empower and destroy them.

Heavenly Creatures, directed by a pre-Lord of the Rings Peter Jackson, tells the story of the most notorious crime in New Zealand’s history. On the 22nd of June in 1954, Honora Parker was bludgeoned to death by her teenage daughter, Pauline, and her best friend, Juliet, with a brick stuffed into a stocking. The murder shocked the nation, tearing apart the tourist-friendly perception of New Zealand as a colonial extension of England’s green and pleasant land. This is mirrored by the film’s opening in which idyllic archival footage of Christchurch in the 1950s is punctured by ragged gasps and shrieks, and we find ourselves hurtling up a woodland path alongside the blood-drenched Pauline and Juliet. Jackson intercuts this with a dreamlike, slow-motion sepia sequence in which the girls almost glide along the deck of a ship about to set sail, calling out for “Mummy.” Here we see the collision of fantasy and reality, illusion and delusion. The murderous teenage girl is nothing new, but this is no stylish revenge fantasy. The murder is brutal, visceral, and genuinely shocking. Their cruelty remains unfathomable. There is nothing darker and more powerful than these girls’ imagination.

Small, dark-haired, working-class Pauline, and tall, golden-haired, upper-class Juliet are an unlikely pair. But while they initially bond over their shared history of hospitalisation (“All the best people have bad chests and bone diseases,” says Juliet. “It’s all frightfully romantic!”), it’s their enthusiasm for fantastical stories of fair maidens and dashing princes that really entwine them. They weave a world where both of them can escape to, and where each provides the other with what they long for. For Pauline, Juliet is romance made real. When she first visits the Hulme family mansion, she sees Juliet bathed in sunlight in the garden, wearing a golden, medieval-style gown. She’s like a 1950s Hollywood vision of a Pre-Raphaelite princess. She’s lived a life of privilege that Pauline can only dream of, but craves the unconditional adoration that only Pauline can provide.

Having been shunted from country to country and clinic to clinic because of her tuberculosis, and often left completely alone, Juliet feels powerless too. Devastated by the news that her parents are leaving her behind yet again, she has a vision of the Fourth World she’s invented, “an absolute paradise of music, art and pure enjoyment,” in which she and Pauline frolic with unicorns and giant butterflies. They believe that they are part of a small, privileged group of people with the power to appreciate it: “On two days every year we may use the key and look into that beautiful world which we have been lucky enough to be allowed to know of.” In their minds, they are heavenly creatures.

The girls write stories about the fantastical kingdom of Borovnia and make plasticine models of the characters, which Jackson transforms into human-sized figures in spectacular fantasy sequences. The world they invent is a space of passion and drama where they can negotiate their identities, often performing as the characters they’ve created. When Juliet is quarantined again, Pauline writes letters as Charles, king of Borovnia, to her as Queen Deborah. Real and imaginary blur, as eventually Pauline will only answer to the name Gina, a beautiful Borovnian peasant girl. Sometimes the Borovnians will invade reality, like when the bloodthirsty Prince Diello saves Juliet from a nosy vicar at the clinic by beheading him.

Pauline and Juliet strengthen and protect themselves and each other through the power of their imaginations and delusions of grandeur. “We have decided how sad it is for other people that they cannot appreciate our genius,” Pauline writes in her diary, with typical adolescent self-absorption. As their relationship intensifies and they withdraw into their own creations, authority figures become determined to separate them. Juliet’s father (Clive Merrison), disgusted by Pauline’s “unwholesome” attachment to his daughter, advises that Pauline be sent to a child psychiatrist, who hisses “homosexual” in an extreme close-up on his mouth, his teeth monstrously large. Pauline visualises him stabbed by Prince Diello; the girls’ dark impulses seem to be escalating. They see The Third Man at the cinema and imagine Orson Welles as Harry Lime (played by lookalike Jean Guérin) chasing them home, an object of fear and erotic fascination. Desire and death are bound together as Pauline leans over Juliet lying in bed, her shadow the unmistakable silhouette of Welles, and kisses her. Pauline’s face transforms into Welles’s and his gloved hand threatens to close around Juliet’s neck.

Juliet’s parents announce their plans to divorce and leave New Zealand, and for Juliet to live with a relative in South Africa. Both girls are inconsolable. They plan to run away to Hollywood together, imagining their stories will be published and they’ll become film stars, but Pauline can’t get a passport without her parents’ permission. Once again, they’re powerless. They fixate on Pauline’s mother as their only obstacle and matter-of-factly formulate a plan to kill her. Their delusions and detachment protect them from the gravity of their decision. “People die every day,” Pauline rationalises. Juliet is more hesitant, but still reassures herself that Pauline’s mother is “rather a miserable woman,” that she “knows what’s going to happen” and “doesn’t appear to bear us any grudge.”

Unlike the stylish, sweeping camera movements that have dominated the film thus far, the murder itself is shot handheld. It’s immediate and unflinching. This was supposed to be their moment of triumph, but it takes blow after blow to kill Honora Parker, and her strangled cries seem to be almost as disturbing to the girls as they are to the viewer. We return to that sepia dream sequence of the ship glimpsed at the beginning of the film, but this time, Pauline and Juliet are wearing the same clothes as they are during the murder. Juliet is on deck as the ship sets sail, crying with her arms outstretched towards Pauline, who’s trapped in the crowd left behind on the dock. “I’m sorry,” Juliet whispers as she sails away. A close-up of Pauline sobbing fades to black, but a smash-cut to her screaming and covered in blood at the murder scene tears us out of their fantasy. Reality has finally ripped through their imagination.

Heavenly Creatures is neither moralizing – exposing the girls as lesbian degenerates and warning the audience of the consequences of their desires – nor overtly sympathetic, rationalising their cruelty. It doesn’t sanitise but it also manages to humanise perhaps the most reviled figures in New Zealand’s history. They aren’t condemned for their overactive imagination; it seems natural that two teenage girls living in the repressive 1950s would want to create their own make-believe spaces where they can have agency and feel special. What could be a more obvious subject for a filmmaker to explore than the power of imagination? And even while we’re horrified by the murder, we’re compelled to wonder about the dark power of our own imaginations. Could we have ever been capable of such a thing as teenagers, intoxicated with delusions of our own brilliance? Over sixty years on from Honora Parker’s murder, the real Pauline and Juliet remain unknowable. But in Jackson’s vision, these heavenly creatures are both villains and victims who haunt us long after Pauline’s anguished face disappears.