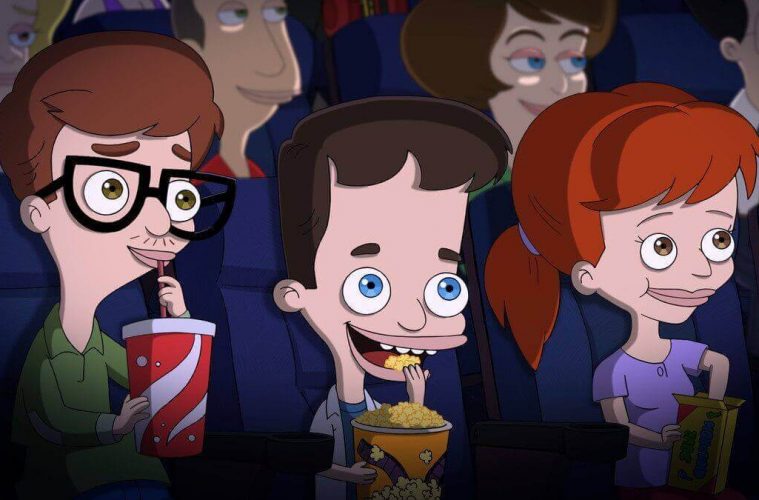 In October, Netflix released the second season of its hit animated original series, Big Mouth, which follows a cast of caricatured-yet-exceedingly sympathetic middle schoolers who navigate the hairy, hormonal, and altogether complicated path of adolescence. With its premiere in 2017, Big Mouth quickly garnered critical attention for its daring embrace of even the most “untouchable subjects,” while capturing the hearts of audiences for its outrageous gags and sex humour that teeters self-consciously between uncomfortable and hilarious.

Continuing this tradition into the second season, Big Mouth has not only energized the genre of adult cartoons (teens and parents alike seem to have taken to it as a positive example of sex education), but has also seemed to mature in step with its characters, developing a political self-awareness and deepening the reach of its humour. One episode, entitled “The Planned Parenthood Show,” explores contraception and women’s reproductive health – issues that have been brought to the forefront of the social imagination since President Donald Trump’s threat to defund the eponymous program during his time in office. In an interview with Vulture, co-creator Nick Kroll explained that the show’s second season responds in part to the “seismic shifts that were starting to unfold” after Trump’s election, a turning point that re-contextualized matters of women’s empowerment and toxic masculinity, along with their convergence in a movement like #MeToo.

To this end, the show successfully articulates the complexity of navigating masculinity, and how boys, in learning to be men, are bombarded with mixed messages of what exactly that is supposed to mean. Jay’s father, from whom Jay is always seeking approval (both are hilariously voiced by Jason Mantzoukas), is a hypermasculine, absentee father who cheats relentlessly on his wife. On the other hand, Nick’s dad is sensitive and secure, in touch with his feelings and the world around him, and still babies a reluctant Nick, who desperately wants to assert his own independence. The second season also introduces The Shame Wizard, who functions as a saboteur to the young characters’ healthy development, shedding light on the kinds of internal mechanisms that prompt boys to grow up to be toxic men.

Among the cast of pubescent tweeners, there is one character who shines in her understatement. Sarcastic and subdued, Jessi (voiced by Jessi Klein) seems to take up a secondary role in the show, acting as the voice of reason and making wry observations from the sidelines in a story world that seems to more or less revolve around the exploits of Nick and his best friend, Andrew (John Mulaney). However, in the second season, Jessi experiences a heartfelt and personal journey of self-actualization, which inadvertently prioritizes her story in its singularity. Feeling alienated by both her male friends (whose attention has laser-focussed on the developed chest of their classmate, Gina) and her separating parents, Jessi is emboldened by her guardian angel of puberty, the Hormone Monstress, to rebel. A stolen pink lip gloss from the drug store spirals into an escalating rebellious streak that ends with her father’s total exile from the family home. In the episode “Drug Buddies,” Jessi dips into her father’s weed gummies only to be found out later by her mom, who angrily blames the dad and kicks him out, despite Jessi’s teary-eyed and defenseless protests.

This scene illuminates how Big Mouth reminds us of our own humanity in more ways than one. Inexorably situated in our social and political times, Big Mouth balances its referential humour with moments that read more like drama than comedy, and ultimately gets to the heart of what it means to grow up. Where Andrew’s and Nick’s parents are steeped in archetypes and beholden to their exaggerated foibles – for one, Andrew’s father comically scream-speaks in a Jewish-New York accent, which makes all his comments seem like punchlines – Jessi’s parents undergo a tumultuous separation that is a little too real at times. While the boys suffer through pubic hair growth delays and pitiful chronic masturbation, Jessi reconciles with her parents’ separation and the emotional wounds it causes, propelling her into drugs, shoplifting, and the sweet embrace of clinical depression. When Jessi’s Hormone Monstress pulls her from the clutches of the Depression Kitty’s seductive spell in the show’s final moments, it is a deeply redeeming arc not afforded to the other characters. After narrowly escaping Depression Kitty’s wiles, Jessi apologizes to her mother for her behaviour, stating that she’d like to see a therapist for her struggles. In this moment, the exploratory satires of Big Mouth are wrapped up in sum, as Jessi teaches us one of the show’s greatest lessons: the power in taking responsibility for our own bodies and lives.

To date, Big Mouth has been received as Kroll’s “most autobiographical” work yet. This seems to have gone undisputed in the show’s promotional media, which reflects the diegetic centering on Nick and Andrew. Nick Kroll and John Mulaney were recently featured in WIRED’s viral “Autocomplete” YouTube videos, and Kroll has made some requisite appearances on Jimmy Kimmel and Jimmy Fallon as well as in GQ. Big Mouth has made headlines in other ways, like Lil Yachty tweeting his desire to be featured in the next season, or Twitter raving about how Maya Rudolph, who voices the Hormone Monstress, says “bubble bath” (which, I must say, lives up to the hype). Amidst this hullabaloo, Jessi and her complex characterization shine as indestructible diamonds in the rough, and while at times upstaged by the louder, big-mouthed, and bigger-headed boys in her class, she endures as the show’s most vital life-force. If middle school is the time when we learn to look beyond discernible optics and superficialities in the hopes of discovering something deeper and more fulfilling, then in Big Mouth, that something is Jessi Glaser.