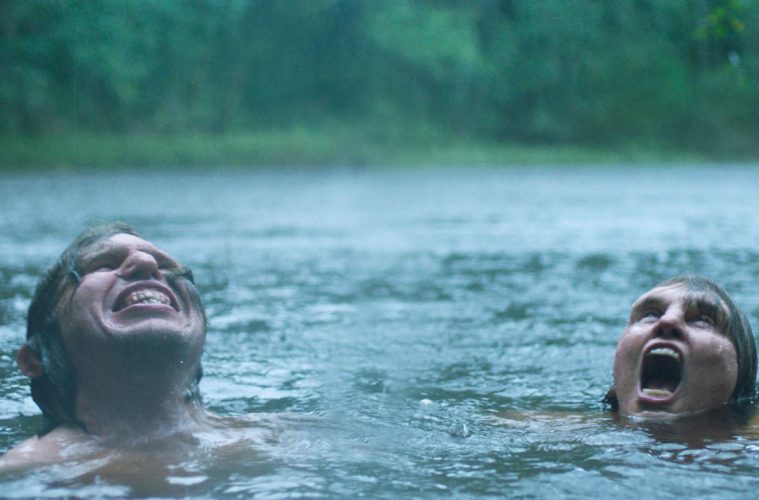 Review: ‘Border’ is a Melancholy Fairytale About What It Means to Be Loved

Most fairytales are thought of as fantastical stories about a woman lost or in distress, only to be rescued by her prince charming or knight in shining armor. Think Disney movie versions of fairytales where everything ends happily ever after. But what do fairytales look like in 2018? Ali Abbasi’s newest film, Border, tries to answer that question, and in the process, creates a beautiful, yet sad, love story that deconstructs heteronormative ideas about love and sexuality.

Border follows Danish border patrol agent, Tina (Eva Melander), who has an exceptional sense of smell. She can sniff out any contraband, even child pornography hidden inside a phone. She thinks it’s just a quirk of hers, until she meets Vore (Eero Milonoff). He looks like her, which she first believes is due to the same chromosomal deficiency that she has. She comes to learn that it’s more than that, but I won’t spoil the exact explanation. While it sounds strange on paper, and takes some very jolting turns, this film deftly weaves in questions about identity with its modern fairytale premise to create one of the most unique films I’ve ever seen.

Importantly, John Ajvide Lindqvist, writer of both the novel and film, Let the Right One In, also wrote the short story that Border is based on. Lindqvist’s work is known for its fantastical plots set in the present, combining societal fears with the supernatural or mythical. He also often addresses questions of identity. Border in particular grapples with personal, social, and gender identity, and how to navigate the world as someone who doesn’t fit into the societal conception of ‘“normal.”

Tina is a social outcast, primarily due to her physical appearance. She comes and goes from her job out of habit, and is constantly met with wary glances from coworkers and tourists alike. She is treated like a monster simply because of how she looks, which illustrates the cruelty of humanity and its ability to write someone off strictly due to their appearance. To avoid these much-too-long glances and awkward stares, Tina further ostracizes herself by living a solitary existence with her boyfriend, Roland (Jörgen Thorsson), in the woods. She becomes a social recluse.

Like her social identity, Tina’s sense of personal identity is linked to what makes her an outcast. She is aware of her appearance and doesn’t believe that she’s capable of love or belonging. She has resigned herself to a life full of loneliness and melancholy, even with her boyfriend who walks all over her. But despite his behavior, he keeps her from being completely secluded from humanity. Only when Tina meets Vore can she begin to rebuild her sense of self and see where she fits in with this new identity, which is both exhilarating and terrifying. While Tina’s struggle with identity does stem from the fantastic, it is still relatable. Her feelings of emptiness, loneliness, and desire to belong resonate deeply, especially with those who have experienced feelings of depression and anxiety.

As if Tina didn’t already feel ostracized from the world, it’s also revealed that heteronormative sex hurts her, something she credits to her chromosomal deficiency. However, Vore reveals that it is more complicated than that, and her preconceived notions of gender are thrown out the door. This is not unlike Lindqvist’s previous work, Let the Right One In, and the vampire, Eli. While Eli is presented through the film as a young girl, it is later revealed that she was born biologically male and was castrated. This fact does not keep a young boy named Oskar from loving Eli, illustrating that preconceived notions of gender identity are not necessary for love. Lindqvist is not scared of exploring gender identities in his work and showing how to move outside of heteronormative ideas.

Besides Border’s portrayal of struggling with identity, its performances from Melander and Milonoff give these portrayals strong emotional depth. They portray their characters with such love and empathy, which is difficult in a film like this. It could easily slip into cheesy melodrama or into something insensitive with no heart. Thankfully, these performances come together with Lindqvist’s writing and Abbasi’s direction to create a hybrid of genres that somehow work in perfect concert with one another.

As the film moves through issues of identity to create a modern, romantic fairytale, it also wanders into the realm of noir, as Tina uses her keen sense of smell to help find the perpetrators of a child pornography ring. While a fascinating subplot, it is the one aspect of Border that isn’t as effective. It attempts to add a layer of drama and a moment of agency for Tina, but unfortunately it falls flat. Venturing any more into that plotline would spoil the film’s end, but I feel that the crime narrative almost ruins the more important moments of Tina’s struggles and discoveries about identity.

Despite this one flaw, Border is an amazing piece of cinema that combines so many different genres to create a unique take on the many facets of identity. This film hit me in my core, which is a testament to its power. Yes, it is a fairytale and wanders into the realm of the fantastic, but it still felt so relatable, especially in its portrayal of loneliness and the desire to feel like you belong. Border shouts its message loud and clear: everyone is capable of loving and being loved, no matter what society says.