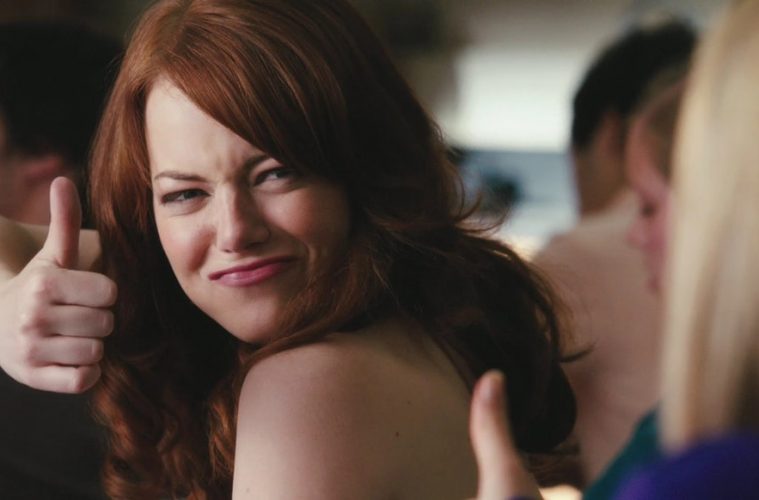 ‘Easy A’ and the Freedom to Explore One’s Sexuality

“Let me just begin by saying that there are two sides to every story. This is my side, the right one.” – Olive Penderghast, ‘Easy A’ (2010)

During the summer before ninth grade, I went to a pool party. The air was ripe with the god-awful tension that exists when you put a bunch of teenage boys and girls together, which was only amplified by the sweltering June sun. I didn’t know many girls at the party – they were my classmates but not necessarily my friends, and the boy I liked had snuck off to a nearby woodland to smoke cigars. I mostly kept to myself, opting to sit by the pool stairs with my feet dangling in the water, trying to avoid being splashed by the litter of over-excited boys swimming in the middle. The only wave I made that day was when I sarcastically agreed to give one of those boys a blowjob – what was supposed to be a final rebuttal to their constant questions about why I hadn’t lost my virginity yet, even though I was a month shy of turning fourteen.

In 2010’s Easy A, a straight-edge teen named Olive Penderghast (Emma Stone) fabricates a story about losing her virginity in order to impress her more experienced best friend. Overheard by a pious mean girl, the story is then spread all over campus, and Olive becomes known as the school slut. As a result, her male classmates begin to proposition her with gift cards in exchange for the ability to tell their friends that they hooked up with her, too. Olive sees no harm in the lies and agrees to the exchanges. When word gets out, the boys are praised by their peers, while Olive is chastised.

The film is heavily inspired by Nathaniel Hawthorne’s 1850 novel, The Scarlet Letter, which tells the story of a young, married woman who gets pregnant with a married man’s child and is forced to sport a red “A” on her clothing in order to let her townspeople know that she is an adulterer. Inspired by the novel, which Olive is reading in her English class, and in an effort to embrace her new reputation, she stitches a red “A” onto her clothes and parades down the school halls.

The “A” doesn’t help her much, however, as she is harassed by her classmates, loses her best friend, gets accused of giving a student chlamydia, and is mortified when a guy she thinks is genuinely interested in her only takes her out on a date so that he can tell his friends they hooked up.

I didn’t follow through on what I said I would do, but the rumor that I’d been dishing out sexual favors at the party spread like wildfire when school finally started. Until then, I had narrowly avoided being a topic of conversation. I was never popular or bold enough to do something worth gossiping about, but when people thought I had become sexually active, everything changed. Girls who had been friendly towards me the year before no longer spoke to me, and boys who had never looked my way suddenly wouldn’t stop. It became understood that I would perform a sexual favor on any boy who asked and it made me feel dirty and ashamed.

If only Easy A had been released in 2007, I could have known how to handle the situation with some integrity. Instead, I was objectified by guys I didn’t know and ostracized by girls I did – the same girls who had crushes on the boy who started the rumor. When I asked him to help clear my name, since he was the only one who truly knew that nothing had happened between us, he refused.

Such as the high-school rumor mill goes, my Scarlet Letter moment lasted a week or two before everyone’s attention turned to some new scandal. I didn’t need to stitch a red “A” onto my clothes to prove a point, nor was I inspired to start a video series in which I detailed our society’s double standards regarding young men and women like Olive did, but I did feel a change. I remember walking through the halls at school with guys in older grades eyeing me. I felt compelled to cover myself up, despite the heat of summer lingering into late-September. I missed my friends, who refused to talk to me because they thought I had betrayed them with the boy they liked.

I wanted to tell them that it wasn’t true, that I could never do that to them, but my anger that they so blindly believed the rumor overrode my need to clear the air.

It’s no secret that girls are shamed for both having sexual desires and expressing them. Even over a decade after my own experience and eight years after Easy A came out, there are still powerful forces within our society which aim to suppress women’s sexuality. Girls are shamed, mocked, and ridiculed for their every action. We can’t be too much or too little of anything, and we certainly can’t fall short of perfection. Yet, since everyone’s idea of perfect is different, we also can’t please everyone, so we are shamed some more.

When Olive tries to take the reigns of her own story, several people (male and female) perpetuate and exploit the idea that she is promiscuous for their own benefit. Her classmates and teachers would rather go along with the idea that Olive is a slut than correct the double standards that praise men for sleeping around and slut-shame women for doing the same. When Olive tries to clear her name, she is told to just shut up and accept it.

I hadn’t done what I was being accused of, but even if I had, it wouldn’t have given anyone the right to call me a slut. A bad friend, maybe, but beyond that? It would have been a completely normal thing to do if I had wanted to do it. But, like Olive, I wasn’t given the freedom to make that choice without immediately being shamed for it. The degree to which I was shamed was decided for me by a boy who wanted to look cool in front of his friends. I’m sure it won’t be surprising to anyone reading this that, in later years, the same boys who had prodded about my virginity at the party called me a prude for not wanting to have sex with them.

It may be hypocritical, but it certainly isn’t a new phenomenon. The shaming of women is a fundamental part of our society and has been depicted in our culture and art since the beginning of time – Hawthorne’s novel was published nearly two centuries ago and is still relevant today. It is likely that women will continue to be sexualized and shamed for years to come, but films like Easy A work to correct these double standards so that one day, what women do with their bodies – to end with the words of one Olive Penderghast – will be “nobody’s goddamn business.”