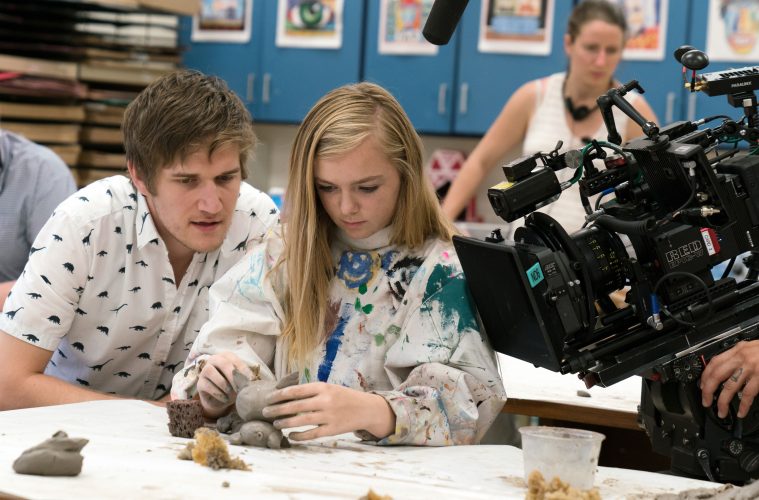 Burnham and Fisher: The Creative Partnership Behind the Success of ‘Eighth Grade’

When Bo Burnham accepted the Independent Spirit Award for Best First Screenplay for Eighth Grade, the first person he thanked was the star of the film, Elsie Fisher. He said her name three times and called her “the entire reason I’m up here” as the camera cut to her smiling proudly and rocking a perfectly-chosen suit—so different from the awkward, green one-piece swimsuit she wears in the now-famous pool party scene in Eighth Grade. But I’m not here to talk about Elsie Fisher’s fashion choices (however great they are), nor about how different she really is from her character, Kayla, because she isn’t. I want to talk about the way that her and Bo Burnham’s is more than a sweet, unlikely friendship: It’s a creative partnership that resulted in one of the most painfully realistic portrayals of early teendom that I’ve ever seen as well as both parties’ artistic growth.

“I was told very often that I was a comedian only for 13-year-old girls. Fuck yeah I am, and I’m really proud of that. They deserve to be paid attention to and to be taken seriously.” If you’ve seen Bo Burnham’s stand-up, you’ll know that his comedy is based on insight, and often demonstrates a lot of sensitivity and emotional intelligence. The fact that he usually conveys it through catchy parody songs, combined with his beginnings as a teenage YouTube sensation, make his work an easy target for the kind of people who would dismiss something as ‘for 13-year-old girls.’ In fact, that statement is negative only assuming that 13-year-old girls are not intelligent enough to be worthy of serious consideration and don’t appreciate complexity, or anything beyond pop songs. Which is the exact notion that Burnham has been challenging for years; first using pseudo-pop songs, and now with Eighth Grade.

When questioned on why he chose to tell the story through a girl’s perspective instead of a boy’s, Burnham said that as he was doing online research on eighth-graders, it was much easier to gain access to the girls’ perspective because they tend to share so much more personal stuff than boys of the same age. Also, may I add, while middle school is a terrible time for everyone, it is arguably a little bit worse for teenage girls, who are either under constant scrutiny, exposed to all kinds of unrealistic expectations, or used as a punchline. Burnham understands this and incorporates it in his brilliantly empathetic script, delving deep into Kayla’s inner world with tact and commitment. There’s no pretense to understand teenagers better than they do themselves, there’s no judgement, there’s no artificiality. Instead, there is a clear, underlying conviction that teenagers themselves are interesting, and their experiences and emotions are rich enough to be worthy of being represented on-screen without embellishment, clichés, or a script that makes them sound as articulate as a 40-year-old YA writer.

This fundamental understanding, which a surprising amount of YA fiction lacks, is evident in the way Burnham talks about Fisher. During the Eighth Grade press tour, they came off as a team, rather than a director and his young star; there was never any condescension in the way Burnham spoke to her. (And there so often was in the interviewers’ questions!) Instead, there’s an evident amount of mutual trust and respect that feels so natural, it makes you question why adults treat teenagers as idiots. And it’s not even a case of Fisher looking or behaving older than she is. She’s comfortably uncomfortable in her age, owning up to her social awkwardness and anxieties, which she shares with her character.

In fact, while both the script and the direction are brilliant, it’s Fisher that makes the film as wonderful and effective as it is. The significance of her contribution goes beyond her additions to the script, even though they’re pretty crucial: Kayla’s signature sign off of “Gucci!” used to be one of Fisher’s real-life “verbal tics” before ending up in the film, and, more importantly, she corrected Burnham’s misguided assumption that teenagers these days communicate through Facebook, insisting that they use Instagram DMs instead. Beyond that, however, it’s Elsie Fisher’s humanity that shines, uncensored, through Kayla, making each of her experiences feel painfully real. The way she slouches, hugs herself, and looks everywhere but in the eyes of her interlocutor, hesitating and looking as if she’s having a constant, exhausting, inner dialogue with herself—I felt each of her feelings with her, and remembered them so vividly that in various points of the film I found myself curled up in a ball, reliving the anxiety of my teenage years. She knew exactly what she was doing.

Elsie Fisher has been very open about her own anxiety, both jokingly and more in-depth, in a thoughtful essay she wrote for Teen Vogue. In all the interviews I’ve seen, she approaches the subject of her middle school experience candidly and gracefully, with the same openness and humour as when she discusses her passion for Dungeons & Dragons. She’s clearly smart and extremely self-aware, with a distinctive voice that comes across in Eighth Grade, and—combined with her acting abilities—makes Kayla feel like a flesh-and-blood person, not someone who’s been written by someone else. In an interview with Variety, Burnham even said, “I remember writing it for her but I didn’t, because I wrote it two years before I actually met her. I can’t believe we were going to make this movie before we found her.”

Ultimately, though, Kayla embodies everyone’s current experience. The uncertainty of the moment, the relationship with the internet, and the anxieties that come with both. The reason why Burnham and Fisher work so well together is the mutual understanding that nobody is more qualified than the other to deal with any of this. Adults turn to kids and kids turn to adults, only to realize that nobody has the answers; we’re all feeling the same thing.