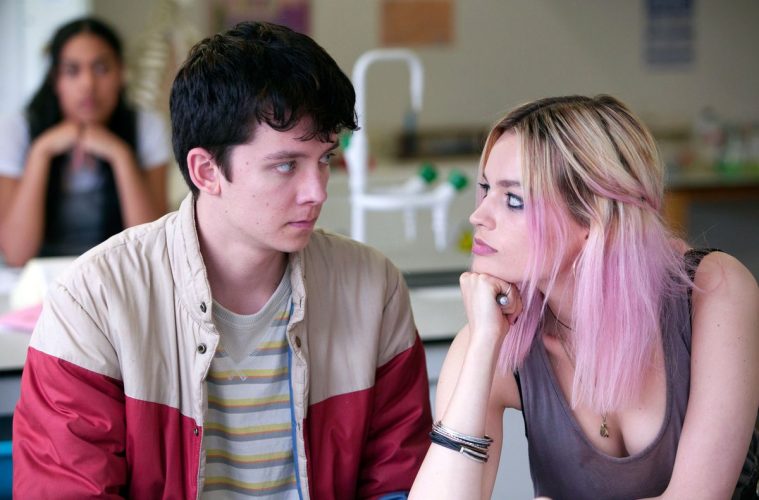 ‘Sex Education,’ ‘Eighth Grade,’ and the Empathy of Youth

Why is a Mars rover making me cry?

This was the question I found myself asking several weeks ago, as I sat at work aimlessly scrolling through Twitter, stopping just short of an utterance that piqued my interest with its succinct poignancy: “My battery is running low and it’s getting dark.” These were the last words of the Mars rover Opportunity, whose planned 90-day mission on the Red Planet had miraculously turned into 15 whole years of ground-breaking exploration. Later, as I recounted to a friend over dinner the story of “Oppy,” the little rover that could, I felt another unexpected wave of emotion wash over me, as if I’d been reminiscing about a dear friend with whom I’d parted ways. It happened again a few days later when I came across this post on Tumblr, which summed up the situation with both clarity and unabashed sentimentality.

The act of humanizing non-sentient objects—and projecting onto them the qualities we value in ourselves—is hardly a new phenomenon. It’s evident in the names we give to these robots: Curiosity, Voyager, Spirit. In recent years, brands have even tapped into this ethos as a method of user engagement on social media. (Think of the playful “Twitter beef” between Wendy’s and Burger King, or the emergence of a corporate meme culture that’s often amusing but can feel, for good reason, disingenuous.) But the more I thought about it, the more I began to understand why the story of Opportunity had moved me so deeply: It was a classic underdog arc about exceeding all expectations, and it harkened back to a simpler, more childlike time in my life when I’d moved through the world without preconceived notions. “Knowledge is power” had been my unironic mantra, and questions were asked freely and without judgment.

Vulture’s Craig Jenkins writes of the “unmitigated, demoralizing selfishness” of the Trump years. And regardless of your stake in partisan politics, the kind of tribalism that has emerged with such ferocity in recent times should be a cause for concern. But as usual, a solution has presented itself in the popular media we consume—namely, the recent wave of youth-inflected film and television that begs us to re-examine our deeply-entrenched prejudices.

Allow me to explain.

When it premiered back in January, the Netflix show Sex Education upended all of my expectations with its surprising emotional heft. The show is ostensibly a dramedy about the awkwardness of teenage sexual awakening, but peel back the cotton candy colors and the hormone-addled graffiti and it’s a master class in empathy. Sex Education revolves around Otis Milburn (Asa Butterfield), a socially inept 16-year-old who can’t masturbate, and his sex therapist mother, Jean (Gillian Anderson), who’s navigating equally murky waters in dating as a divorcée. The loving, if at times frustrating, rapport between mother and son underscores how much the two actually have in common, despite their vastly different life experiences.

If anything, a big takeaway from the show is that the adults who claim to know what they’re doing actually don’t. Even Jean, whose very job description entails being a sex and relationship expert, gets flustered while propositioning her handsome handyman, and has no idea how to get her son to open up to her. In life, we’re told, “fake it ’til you make it,” but this banal axiom assumes that there’s a point in time in which we do, in fact, make it; in a lot of areas of life, that’s just categorically false. When it comes to love and lust, it may well be that we don’t ever get the hang of things—we just learn to find solace in our collective anxieties. And the more we broach these difficult subjects, Sex Education seems to suggest, the better off we’ll all be.

The show’s delightfully skilled supporting cast helps hammer this point home nicely. Some of the most affecting moments of its eight-episode season, in fact, revolve not around the Milburn household but rather Otis’s best friend, Eric (Ncuti Gatwa, an undisputed scene-stealer), and reluctant business partner/love interest, Maeve (Emma Mackey, in her best grunge cosplay). Eric and Maeve are frequently on the receiving end of darker storylines, but these are confronted with humor and optimism, without making light of the circumstances. When Maeve finds herself unexpectedly pregnant, a visit to the abortion clinic leads to an unlikely connection between her and a world-weary mother. It’s a brief but impressive beat that’s all heart and no moral arbitration. After experiencing a homophobic hate attack, Eric decides to come out—first to his gruff but accepting father and then to the rest of his Christian congregation, who welcome him with open arms. The gesture runs the risk of flattening the age-old oppression wrought on LGBTQ+ individuals by their religious communities—as Ellen Page has reminded us, there’s much reckoning to be done—but it ends up being a refreshingly positive spin that we don’t see too often in mainstream entertainment.

Regrettably, Sex Education occasionally overextends its compassion, which manifests in a dalliance between Eric and the bigoted school bully, Adam. The implication that all homophobes are just embittered closet cases is, frankly, both lazy and regressive, and I have to question why the writers of an otherwise sensitive show would do such a disservice to a wholly three-dimensional character who deserves far more imaginative and dignified storytelling.

Sex Education’s motley crew has much in common with Kayla Day (Elsie Fisher), the protagonist of writer/director Bo Burnham’s feature debut, Eighth Grade. The film is a beautifully nuanced portrait of young adolescence, but, in many respects, the real revelation is the story behind the camera. Like his heroine, Burnham belongs to a generation of young creatives who came of age in the digital era. This group of mostly comedians and musicians, which includes Shawn Mendes and Lilly Singh, have been able to parlay their success on YouTube and Vine into professional careers. But Burnham is self-aware enough to be critical of the very vehicle that earned him his living, and reveals how isolating social media can be for kids who aren’t blessed with popularity and affluence. Eighth Grade, which exhibits incredible creative restraint with its uncomfortably long silences and awkward angles, is both funny and astute—not to mention endlessly empathetic. Comedy is a notoriously hard-knuckle industry, where niceness doesn’t really fly—it explains why Andy Samberg and Sandra Oh’s well-meaning “kill them with kindness” shtick at this year’s Golden Globes failed to land. All the more reason to applaud Eighth Grade’s deftness in confronting life in all its squirmy, imperfect realness, without resorting to cruelty or caricature. There’s not a whole lot of plot, but you’ll surely come away a better person for having seen the film.

In both Sex Education and Eighth Grade, we see a friction between socialized learning and institutionalized academia. The lessons our beloved characters sit through in school, as we know, do very little to prepare them for the issues they face in their everyday lives. The most important education, of course, takes place not within but outside of the classroom (which also makes for an apt metaphor for thinking critically under a dishonest government). The wonderful thing about empathy is that while it can’t be taught, it can absolutely be learned. Empathy isn’t just a virtue; it’s an ongoing practice that requires constant self-examination, and a commitment to both keeping an open mind and always striving to do better. In some ways, it’s a return to an earlier stage of life, in which we absorbed information like a sponge and allowed ourselves to fail without reservation.

Hulu’s PEN15 embraces this idea to a literal degree. Real-life friends Maya Erskine and Anna Konkle, both 31, play 13-year-old versions of themselves in the year 2000, as they enter seventh grade and learn to traverse a minefield of social problems. The catch? Erskine and Konkle’s co-stars consist of actual teenagers, so the two stick out among the cast like age-inappropriate sore thumbs. It’s a stylistic choice that works on multiple levels—as a reliable sight gag and a symbolic move, firmly connecting past to present and forcing viewers to revisit their younger selves with a sense of immediacy. Put yourself in a 13-year-old’s shoes, it beckons. What would they have to teach you?

In the contemporary art world, there’s an emerging school of American figurative painters who revel in the intimacy of their process, positioning themselves as equals with their subjects. Jordan Casteel is one; Aliza Nisenbaum is another. Casteel felt called to action after the shooting of Trayvon Martin, which convinced her that the world needed more nuanced portraits of Black men. With her background in sociology, Casteel was drawn to the idea of art as a tool for justice. “I see their humanity,” she professes of the people in her paintings, “and, in turn, I want the audience to engage with them as fathers, sons, brothers, cousins—as individuals with their own unique stories to share.” Nisenbaum, who has received critical acclaim for her portraits of immigrant families, echoes the sentiment. “There’s a kind of mutuality that happens in sitting for a portrait,” she reveals. Casteel: “I have to be vulnerable to expect vulnerability.” Nisenbaum: “Revolutionary movements are always made when different people come into solidarity with each other.” It’s clear that an empathetic point of view requires a genuine give-and-take, as well as a profound sense of humility. Especially in these times, empathy is an outright refusal to live in fear of the unknown.

To be perfectly clear: Empathy is not an invitation for blanket forgiveness, nor is it a get-out-of-jail-free card for despots, abusers, and bigots. But forget “cancel culture,” that gross oversimplification of what we do when we hold people in power accountable. Or those comically inadequate Notes app apologies that celebrities seem to be so fond of, and the immediate virtue signaling they provoke from everyone else. Perhaps it’s time to look inward at our own capacity for progress and growth. Despite the long shadow Trump has cast over moral integrity and basic decency, there remain sparks of hope. To see an example of a head of state who leads with heart, one need look no further than New Zealand Prime Minister Jacinda Ardern, who responded with equal parts solidarity and strength to the recent mass shootings at two mosques in Christchurch. Ardern did not mince words in rebuking white nationalism, introducing gun reform at an unprecedented pace, or putting pressure on social media platforms to remove footage and doctrine relating to the shooter’s crimes. When it comes to heinous acts rooted in hatred, the most empathetic thing we can do is condemn the offenders, not to reach across some mythical party line that draws a false equivalency between intolerance and existence. Some degree of skepticism is healthy, even necessary, in any functioning society, and it’s certainly not incompatible with empathy.

I am heartened by the Youth Climate Strike that took place in March, in which an estimated 1.6 million participants worldwide took to the streets to demand systemic action in the climate crisis. There was the sense that these young people were disillusioned with their governments’ inaction, but instead of giving up, they’d decided to take matters into their own hands. With its echoes of the May 1968 protests, and far greater repercussions, the strike communicated an unwavering resolve to face what is essentially the greatest existential threat of the modern age. And what could be more empathetic than that? “The lesson from this muck, if there is one,” suggests Jenkins, “is to read patiently, speak carefully, and love endlessly.” If art has its finger on the pulse of the zeitgeist, and it usually does, then its message couldn’t be more straightforward: Sit down and pay attention, and maybe you’ll learn a thing or two.