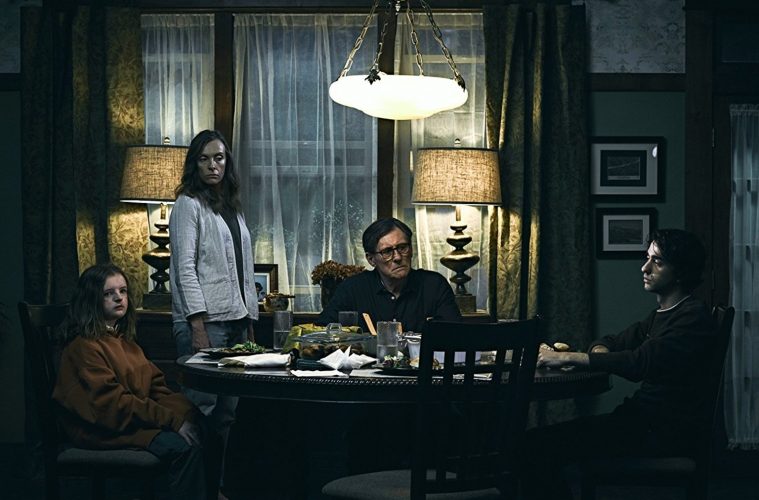 Review: ‘Hereditary’ and the Horror in Our Homes

Hereditary wants to ask you if you know your own family. Take a minute to mull that question over. Well, do you? Because Ari Aster’s freshman feature also wants you to understand that you don’t, not at all, not even a little bit. That no matter how tightly-knit or loving and utterly open things may seem, a family is a festering wound. Families are, by nature, built on the worst in us – anger, grief, trauma, mistrust, eventual loss and suppressed feelings that, sooner or later, will bubble to the surface and cause the emotional cesspool to overflow. Take, for instance, when Annie (Toni Collette), matriarch of her broken clan and utterly stricken with grief, unloads her resentment towards her teenage son, Peter (Alex Wolff), over dinner, and the unintentional suffering he has caused her. It’s the culmination of gears grinding in the ever-toiling engine of the modern family, and the ultimate machination for horror is an invisible monster built on our nearest and dearest – a monster we have no hope to escape, no matter how far or how fast we run from it, because the blood running through our veins can sometimes be a monster all on its own.

The Graham family consists of Steve, the father, played by Gabriel Byrne; the children, Peter and Charlie (a fantastically chilling Milly Shapiro); and mom Annie, a miniature-making artist with an unenviable past. Annie is dealing with the conflicting recent loss of her mother, Peter and Charlie’s grandmother, a cold woman who had many rituals and who would’ve been surprised to see the high turnout at her own funeral. Annie is characterized from the start as no stranger to the loss of loved ones, being deeply entrenched with familial grief at an early age – her recently deceased mother struggled with mental illness, as well as her previously deceased older brother and father. But Annie’s relationship with her mother was rooted in emotional abuse and manipulation, and so she finds her passing a bit difficult to pinpoint feelings on. She loved her mother, but she didn’t really know her, and she was never really treated as if her love was even deserved.

And with this comes the unstable foundation that the family is built on, starting with Annie noting her mother’s secretive nature during her eulogy and continuing to the buildup of white lies the family members tell each other on a regular basis. “Just some billing crap,” Steve explains to Annie after a suspicious phone call from the cemetery where her mother was buried; Peter telling Annie he’s not going to drink at a party, which is true – because he smokes weed instead; or Annie casually mentioning her friend Joan (Ann Dowd) to Steve, a surprise to him since such a name, let alone a friend, has never been brought up prior. There’s Annie’s shaky relationship with Peter due to a traumatic, sleep-walking induced incident that happened when he was younger; little Charlie and her macabre crafts, who never cried as a baby and who Grandma wanted to be a boy; Steve’s general uncertainty of his wife’s current mental state, keeping her family’s unfortunate history ever in the back of his mind; and Annie’s way of making grisly miniature art of her own traumas to work through her hurt. The Graham family is portrayed as being broken, weird, and unstable at its core, but then again, what family truly differs? The Grahams are not supposed to be an outlier of the suburban upper middle class. They are one and the same, a typical family with typical secrets and pains passed down between generations.

Even as the supernatural begins to seep through the edges of the frame, until the family becomes hampered by impossible horrors, there is a grounding of realness that does not escape from view, even when it seems like reality is being tossed to the wind. The lines between grief and ghosts, between mental illness and a deal with the devil (well, almost the devil) are constantly blurred, even when it seems all too evident that Gam-Gam’s hobbies are what’s to blame. The demons and diseases go hand-in-hand in Hereditary – one influencing the other, neither separate nor united, keeping audience certainty at bay towards what is real and what is, perhaps, delusion. The horror of family is more than a grandmother with freaky friends and questionable pastimes, for it is the very nature of family itself; what’s given to you that you cannot escape, like a curse or a disease, like the hereditary nature of mental illness being passed from parent to child. A family is the perfect breeding ground for evil, inherently flawed and utterly cobbled-together like when puzzle pieces fit where they do not belong. A family does not truly know each other, trust each other, or sometimes, even love each other. They are simply people brought together by forces bound in nothing but coils of DNA, and they can easily be weakened if they are not already.

This is what makes Hereditary such effective horror beyond the paranormal spectacle at the heart of it: through the ways in which it creates fear in the familiar. The most affecting horror films are not the ones with the most ambitious storylines, unbelievable monsters, or audacious amounts of gore, but the ones about what could come crawling after us in our own homes. It’s the same way Rosemary’s Baby excels at creating intense unease from the slow-burn decline of lead character Rosemary Woodhouse into emotional and mental bedlam: through revelatory mistrust in those closest to her and the realization that the monster she must run from lies dormant within her own body, not from the next-door cult of devil-worshipping geriatrics. Or how 2015’s The Witch finds its creeping terror not from the obvious title lady, but from the total desecration of the film’s puritan family at the hands of their own paranoia and suspicion of one another.

You can call it derivative of a familiar framework, or you can appreciate the ways it takes these ideas and themes we’ve seen before and creates something utterly its own. The film is two hours long and drags you every aching, bloody step of the way, as the audience descends into the same state of misery and degeneration as the Grahams. The homey horror finds itself symbiotic with a suffocating atmosphere – not simply for the audience, but for the characters themselves in multiple instances. Hereditary traps you in the same way that the Grahams are trapped, through long takes that do not let up well past the comfort point, and a score that hums and vibrates, pushing on your chest until it feels like your sternum might break. While it’s hard not to feel like the film could have taken its scares a step further, the end result is a tapeworm nightmare that wriggles around in your grey matter hours after watching, and will have you checking the darkest corners of your house at night for any sign of a smile.

The Grahams of Hereditary were, from the very beginning, “pawns in a horrible hopeless machine,” as explained by one of Peter’s classmates towards the start of the film, in response to a question posed by their teacher on a book that the class is reading. “They never had any hope.” They were pawns, like the little miniature versions of themselves in Annie’s artwork, the paths of their lives out of their own hands and in the ones belonging to a higher power: Annie’s mother, or the circumstances of their very birth and existence (excluding Steve’s case). In this way, Hereditary is a foil to the typical horror movie, antithesis to the monster hiding under a bed or the machete-wielding slasher chasing you down the street. The protagonists of a horror film always have a chance to outrun what is pursuing them, but the Grahams never did. The pact was sealed, the gears were in motion, the bloodline was intact. After all, a family is both a gift and a curse.