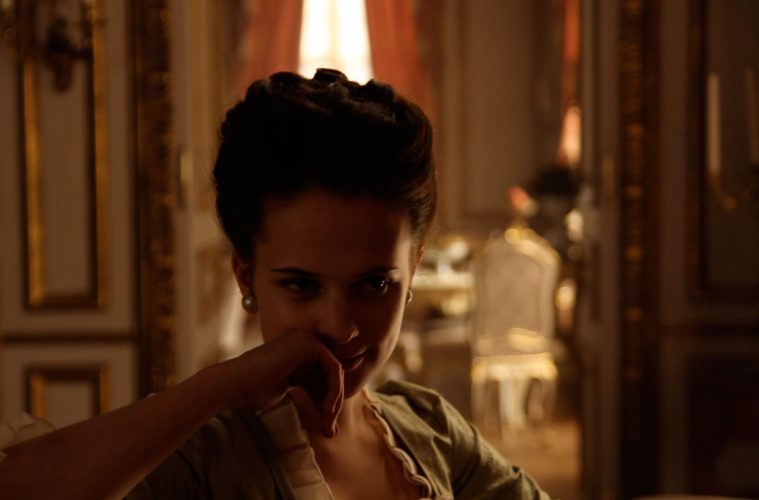 The Terrifying Things We Did for Love: Extramarital Affairs in ‘A Royal Affair’ and ‘The Duchess’

We love to watch the illicit, extramarital affair on film. There is a certain pleasant uncertainty in watching two people who act outside of the bonds of marriage, dancing fretfully close to the precipice of danger. Their liaisons can incite feelings of voyeurism in us; we, too, are in on the secret – we dance on the edge with them. Setting the affair in a time period more stringent about the nature of male-female relationships, such as the 18th or 19th century, only heightens this sensation.

The Duchess (2008) and A Royal Affair (2012) offer variations on the theme of infidelity and the romantic affair in period drama. But their commonality – focusing on the woman and highlighting her personal stakes in taking part in the affair – offers a unique perspective on the way these fictional or fictionalized women obtain and ultimately lose agency through love and impulse. These films also prioritize women’s desire, allowing a kind of female gaze to guide the visual narrative of the affair. While voyeurism is an initial draw, these films find their thematic home in navigating the woman’s position in this precarious situation, and in the power they are allowed outside of the traditional bonds of marriage.

Marriage is a sacrament – a sacred promise of fidelity and loyalty between individuals. In the case of these films, it is often a promise made out of necessity or convenience for both parties. And while both parties benefit from it, marriage as portrayed in these films is an unequal situation where more expectations are placed upon the woman.

To illustrate the inequality of the woman’s situation in marriage at this time, most films of this genre begin by showing us how the woman became a wife. Often, she is completely removed from negotiations, a decision made for her at the hands of her parents or guardians. In The Duchess, the Duke of Devonshire (Ralph Fiennes) watches the young and vivacious Georgiana (Keira Knightley) entertain her friends on the lawn. He negotiates a marriage deal as nonchalantly as discussing the weather. Her cheeks are ruddy when she meets her future husband. We see her transformation from a carefree girl to a staid wife; her liveliness vanishing under the weight of her husband’s expectations for her: produce an heir or else.

Or take perhaps the careful Caroline Mathilde (Alicia Vikander) in A Royal Affair. After she learns of her impending marriage to the king of Denmark, she practices her Danish while contemplating his portrait in her locket. She stresses over how to be a good wife and queen, obsessing over manners and how to sexually fulfill her partner. But after she marries him and realizes that his boorish behavior is indicative of untreated mental illness that everyone politely ignores, she sinks into a depression that makes her new husband believe that she is frigid and self-serious.

These films highlight the disparities between husbands and wives in the context of this time period. These women are often not given the choice of who they shall marry, and then find that they must make a fundamental shift in their personalities in order to fit into the confines of their marital arrangement. To maintain a comfortable life, they are expected to bend to both society’s and their husband’s expectations in such a relationship. In marrying, they find themselves giving up what little agency they had. 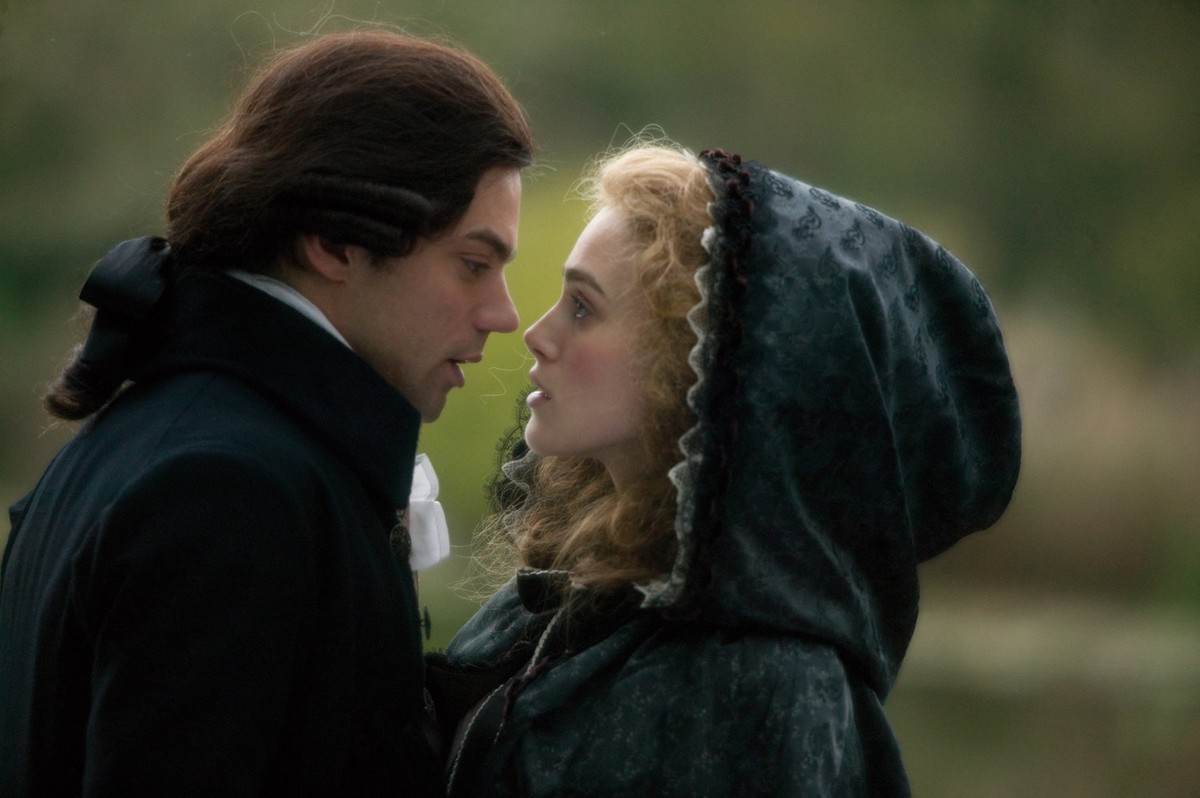 Charles and Georgiana in ‘The Duchess’ | Photo: Rotten Tomatoes

II. The Lover as Unfulfilled Need/As Other

And then suddenly, when all hope seems lost, the perfect person appears.

The Lover is presented as a view – and if acted upon, a means – into an alternate life. He is a series of questions: What could have been? What could still be? Thus, the Lover she chooses is very often someone who is the complete opposite of her husband. Where one man is staid and proper, another is passionate and rebellious. Where one is analytical and cold, even impotent, the other is artistic and vivacious. If one is uninterested in the people he rules, the other is dedicated to Enlightenment ideals of the people’s wellbeing and prosperity.

Much like how the Lover represents a different view of a woman’s life, period dramas about the extramarital affair also offer an alternative gaze by the very nature of their subject matter, helping to counteract the male gaze that is so prevalent in film. Films that centralize romantic affairs preference a female gaze because they prioritize the woman’s desire. We see the object of her desire as she sees him; the camera lingers on a jawline or his hands. Exchanges are built on charged eye contact, or a dance where the world around them fades to black.

In The Duchess, Georgiana finds herself falling in love with politician (and future Prime Minister) Charles after she finds an outlet in political engagement. In their affair, she is allowed to freely express her desire in a way that she is not in her marriage. She undresses Charles; she is on top when they have sex. She spends leisurely days with him in bed, laughing over gossip printed in the newspapers. Her affair with Charles allows her to be a woman who feels and acts on her desire – not only her sexual desires but also her heart’s desire: to be known; to be well matched in wit, manners, and love. To not only be someone who brings pleasure to others, but to be someone who is allowed to derive pleasure and fulfillment from a relationship.

Caroline of A Royal Affair also finds intellectual fulfillment and respect outside of her marriage when her husband Christian hires a doctor to help him with his mental illness. Dr. Johann Struensee (Mads Mikkelsen) visits Caroline Mathilde after Christian insists that she must be in ill health, as she is “unfun.” Struensee, without explicitly acknowledging it, lets her know that he understands she is profoundly unhappy in her marriage, which has put her in a depression. Caroline is initially uninterested in his help, but then she notices his bookshelf. They bond over banned books that Struensee hides – books by Voltaire and other Enlightenment thinkers on the subject of how best to serve the people. The same titles that were taken away from Caroline when she first moved to Denmark. He lends her books that she reads in secret, and he later shares his own writing. They begin their affair with a mission statement: both of them are interested in better serving the suffering people of Denmark and moving the country into the future.

An affair is at once both the most private and the most public relationship. The affair must be discovered for the full, nuanced emotional weight to be felt.

Often, there is evidence of the affair, found out by or divulged to the husband. More often than not, the evidence is a baby, born under conspicuous timing. The baby is evidence that the affair is tangible, that choices have been made in secret and in spite of a legal relationship, without permission from the husband. Caroline and Georgiana have daughters with their lovers. (It begs the question if their legitimacy would be questioned as stringently if their illegitimate children were born male. A female baby, explicitly undesirable in The Duchess, raises suspicions because the woman’s ability to have a son remains a constant concern.)

To highlight the disparity of romantic and sexual liberty between women and men, The Duchess shows the husband engaged in an affair. Lonely in her marriage, Georgiana finds friendship in a woman named Bess. However, when she discovers her husband is having an affair with Bess, Georgiana feels the full weight of the double standard society has placed on her and the loneliness inherent in her situation. She is expected to live harmoniously with her husband’s mistress, her once best friend. When she declares that she, like her husband, will also take a lover, he violates and sexually assaults her. She has the affair with Charles regardless, but is pushed into an ultimatum by her husband. If should she continue with this relationship, she will be forbidden from seeing her children ever again.

After Caroline has his baby, Struensee becomes more and more jealous of her husband, Christian. He grows short with him, even yelling at him in front of his other advisors. Struensee’s shortened temper is a catalyst for his arrest and subsequent execution; his anger makes not only his own guilt visible, but Caroline’s too. Their connection to one another is discovered and added to the reasons that they must be removed, and a new king installed to the throne. 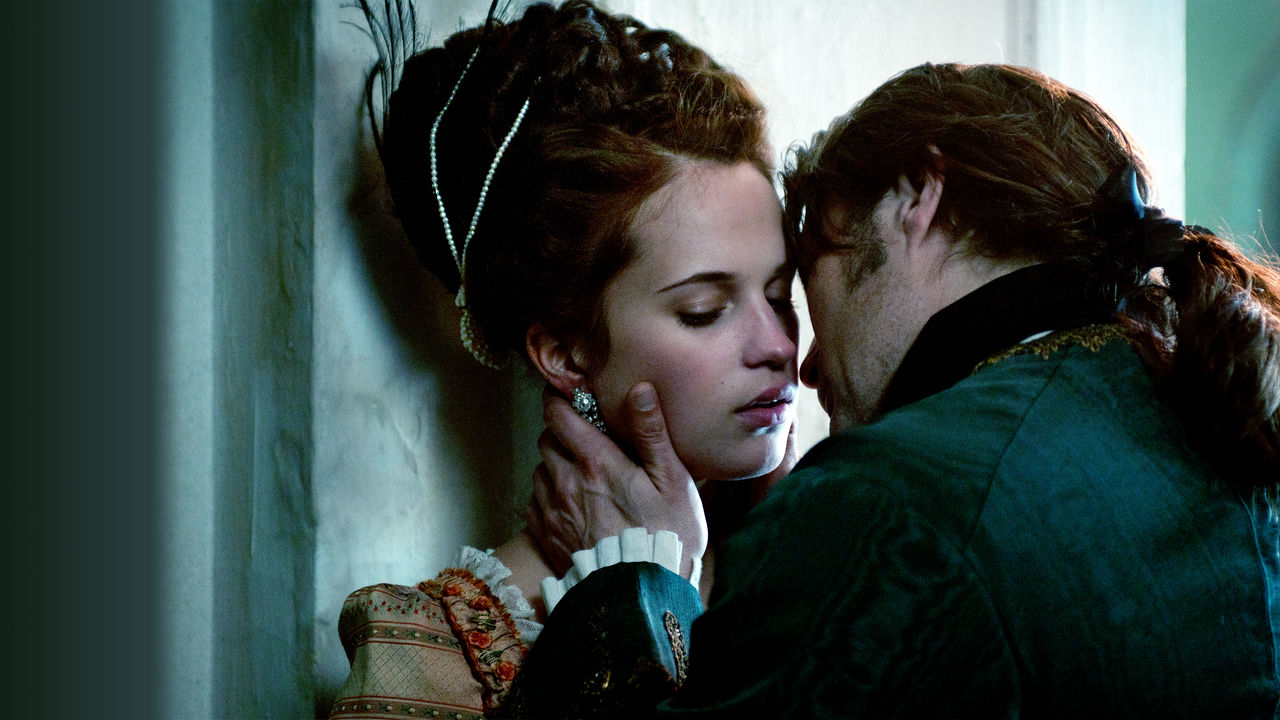 Caroline and Struensee in ‘A Royal Affair’ | Photo: Netflix

The tragedy of these films, what unites them more than infidelity, is the woman’s punishment for engaging in an affair. Not only because she acts upon love outside of the strict boundaries given to her by the sacrament of marriage, but because she experiences the forbidden fruit of agency. When women engage in an affair, it allows them to maintain control over their decisions, something that is stripped from them when they get married. And for making a choice instead of having one made for her, she is punished.

Caroline and Struensee are banished from court, with the latter being sentenced to execution. The film implies that Caroline helped Struensee get his political position, and we see her use the position she helped him get to try to pass public health legislation – moving Denmark toward Enlightenment ideals. His crime is manipulating the king into giving up his power – what amounts to a coup d’état. Caroline is sentenced to banishment more because of her affair than her pro-Enlightenment stance. In the countryside, she writes a letter to her children to be read to them after her death, asking for their forgiveness and for their help to make Denmark a progressive society once more.

Georgiana’s punishment, on its face, is perhaps the most lenient of all. After all, she lives. And her lover lives. She gets to keep her social position, suffering almost no blow to her reputation. But her punishment is much more brutal – slow and torturous. She lives the rest of her days with her husband and his mistress, forgoing romantic fulfillment for the sake of being able to stay with her children.

Surely, we know going into these movies that the affairs cannot withstand the weight of societal oppression. There is rarely, if never, a twist wherein the woman and her lover are allowed to continue their relationship. The best case scenario, as shown in The Duchess, is that no one is killed. But as with the other films discussed here, people often are. The world of the 18th century presented in these period dramas cannot sustain both traditional ideals of marriage and the notion of a woman choosing to engage in extramarital affairs.

Often, the novels and historical events on which these films are based are de facto morality plays by nature of the man who held the pen. They highlight how romantic impulsivity in women was seen as a moral failing, leading to their downfall and, in all likelihood, their death. Adapting these novels for the screen allows us to centralize the woman in a new way, to see her as an individual who gains a sort of agency in a system where she is afforded almost none.

A Royal Affair and The Duchess create portraits of women that are not steeped in a black-and-white morality. But the lesson isn’t that women who find themselves in this relationship are morally unsound, but rather, women in this illicit relationship are seeking the fulfillment denied to them by nature of their gender and social standing. The films aren’t condemning the women for making a choice, but rather, the societies in which they live.