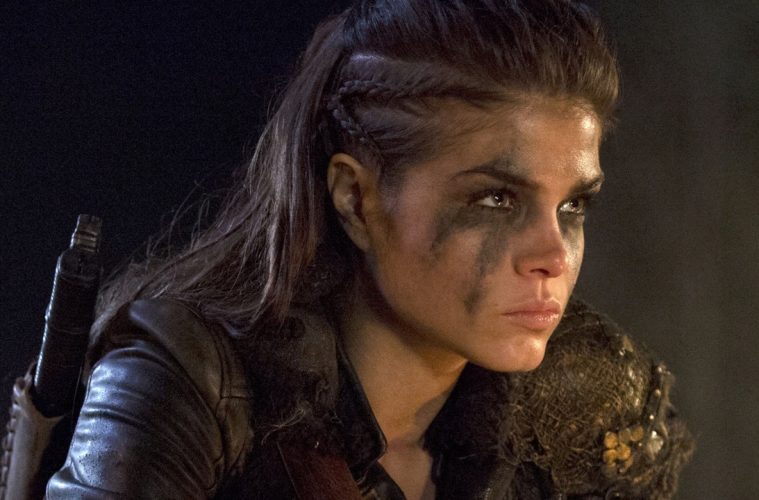 Octavia Blake: Badass Warrior or Girl Under the Floorboards?

Damsels in distress. Princesses to impress. These are some of the typical roles that female characters embody when there is danger on the horizon.

The hit show The 100 likes to push boundaries in terms of what it means to be a woman in a post-apocalyptic world. Its writers give us not one, not two, but four powerful female characters: natural born leader Clarke, her mother and healer Abby, badass engineer Raven, and sheltered girl-turned-warrior Octavia. Amidst all of those powerful dynamics, the fourth season has plenty of opportunity to subvert those “weak female” classifications.

The show’s structure typically jumps from character to character, following our heroes as they navigate the atomic wasteland that is now Earth. One episode, however, is dedicated mostly to a specific character. In “Die All, Die Merrily”, Octavia steals the show when a member from each remaining clan must fight in a conclave. Stakes are high as a radioactive storm threatens to wipe out the human race, since the winning prize is a bunker that can save part of the population. The best suited candidate to represent Sky Crew, Octavia’s fighting chops are put to the test in a battle to the death.

The moment Octavia volunteers herself, you can practically hear women cheering from their couches as they watch. After all, we have watched her transform into this warrior persona from the first season. Unfortunately, our heroine falls short of expectations, falling into the same stereotypes the show tries to subvert. Instead of fighting nobly, her tactics are passive in a game of cat and mouse. Despite winning in the end, the victory for her clan is not a feat of strength, but rather a result of Octavia’s return to her childhood persona.

As a child, before the hundred delinquents’ descent from space to the ground, Octavia’s life was one of secrecy. On the Ark, the spacecraft that housed her clan for three generations, her existence was illegal. Population laws would limit families to one child each because of scarce resources. Since Octavia was her mother’s second child, she was forced to live under the floorboards for years. Her only human interactions involved her brother Bellamy and their mother, though she needed to stay vigilant in case it came time to hide again. Eventually discovered by authorities at 16 years old, Octavia was sent to the ground with the other delinquents as punishment, marking the beginning of her evolution into a fiercely independent warrior.

Octavia flourished on the ground upon their arrival on Earth. She was among the first to embrace the cultures of other tribes on the ground, which largely contributed to her toughening up. While other members of Sky Crew saw Grounders as enemies, Octavia saw their humanity. She even went so far as to start a romantic relationship with a Grounder named Lincoln. Her strength of character continued to progress over the show’s run, even while mourning her lost lover.

In the battle episode, it therefore comes as no surprise that Octavia will be Sky Crew’s tribute. She volunteers herself with grace and is the beacon of hope that might spare the lives of Sky Crew. Out of the eight tributes in the conclave, only two are women. As the battle began to unfold, I wanted nothing more than to see Octavia defy the odds and defeat her male counterparts. Her involvement ended up being limited. Prior to the fight, Bellamy’s advice to his sister is to “be the girl under the floorboards” in order to win. Listening to this, Octavia holds back until only two opponents remain. Tactful? Yes, but for a woman who had fearlessly defeated many by sword in the past, this was definitely out of character. How could a woman with such thirst for blood stand idle as men butchered each other to death?

During the final moments of the battle, we’re now down to two: Octavia and Luna. Unlike the former, Luna is there to fight. As the last of her people, Luna doesn’t want anyone to have the bunker if she wins, but would rather see the extinction of humanity. They are equal as rivals, but instead of this leading to an epic battle, the opportunity is missed and Octavia is back to hiding. The camera suggests that Octavia is hidden in a closet as Luna searches the room with voracity. Luna paces around, stalking her prey as she delivers a speech about the selfishness of the human race.

But suddenly, a sword pierces through Luna’s back, revealing Octavia as the victor. The set-up is there for an epic battle to the death, but we’re instead left with a backstabber – a gentle allusion to stereotypical female cattiness. Forget noble notions of fighting fairly. Where men fight openly and die gallantly without question, women must resort to striking at the right moment to win.

For a show that is proud of its band of strong female characters, the episode had far more potential. Though it was a step in the right direction, let it serve as a reminder that we still have miles to go for gender equality on television. Octavia, we’re still rooting for you.