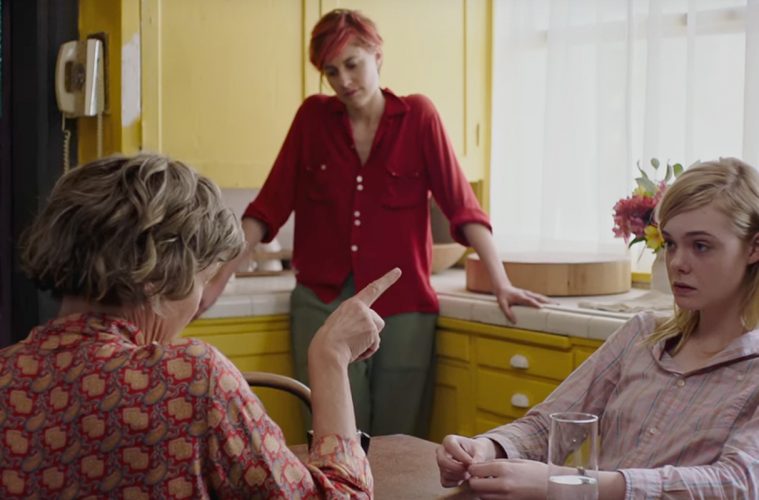 20th Century Women, director Mike Mills’s follow up and counterpart to his 2010 film Beginners, is the story of three women, two men, and their non-normative family dynamic.

Dorothea Fields (born in 1924) gave birth to her son Jamie at 40. She is anything but a regular mother. She tries to treat Jamie with respect and dignity from the time he is a child. She argues with bank managers to get him a bank account, she argues with his school administration about his truancy. She is delighted to see how he fakes her signatures on his absentee notes. After Jamie partakes in a potentially fatal fainting game and doesn’t regain consciousness for thirty minutes, Dorothea realizes that every day she knows her son less and less. She recruits the women living in her home to help raise him. These women include an ovarian cancer survivor in her mid-twenties, Abbie, and an obviously lost, promiscuous teenage girl, Julie.

Throughout the film, there is consistent use of voice-over narration to both enlighten the audience about the characters’ lives and feelings, and give context. Every single principal character in the film is utilized in the voice-over, and the film closes with each narrating what their life will become beyond the boundaries of the present plot. During the voice-overs, there are shots of the characters’ future lives, their partners and houses, their work, their deaths. Jamie, especially, speaks to the future when he will have a child and will tell them about their grandmother. (He adds that she’ll be impossible to summarize.)

On the night after Jamie is released from the hospital because of his near-death experience, he takes off to a punk show in LA without telling his mother. Dorothea tells her housemates that Jamie is angry with her and has every right to be. When Jamie comes home drunk that night, Julie tells him that she had unprotected sex. Jamie tells her he “do[esn’t] want to hear that shit,” but days later, buys her a home pregnancy test. At the end of the film, Julie and Jamie run away, intending to take a road trip down the coast. In their hotel room, Julie sits in her bra and underwear. Julie tells Jamie she can’t have sex with him because she’s too close to him, and doesn’t want their friendship to change. When he protests, she tells him he’s being just like the other boys.

Abbie, my personal favourite character, is rich with life and kindness. After moving back from college in New York City and having discovered that she has ovarian cancer, she moves into Dorothea’s house after a short spell at her mother’s and works as a photographer. The film does a great job of presenting the legacies of the effects of reproductive drugs on women. Like the case of the morning-sickness drug Thalidomide, Abbie’s mother had been prescribed a fertility drug that ultimately left many daughters with ovarian cancer.

20th Century Women explores the idea of legacy. Utilizing found footage, it calls back to the Vietnam War, the punk scene, women’s liberation, the hippie movement, and the Great Depression, among other historical events. At one of Dorothea’s unorthodox dinner parties, all the characters and partygoers sit to watch Jimmy Carter’s “Crisis of Confidence” speech. While a few of the guests proclaim that the president is “fucked”, Dorothea remarks that she thought the speech was beautiful.

When Jamie is embarrassed by something his mother does, his explanation is always, “she grew up during the Great Depression”. Although Dorothea is a single mother and boldly independent in her actions and personality, she is weary of the women’s movement, which creates tension between herself and Abbie. One of Abbie’s tactics to help raise Jamie is to gift him several books she read in a Women’s Studies class. Jamie learns quickly about the “female orgasm” and concepts like ageism. One morning, he reads Dorothea “It Hurts to Be Alive and Obsolete: The Ageing Woman” by Zoe Moss. The piece depicts the struggle of a woman who is no longer utilized for her sexuality because of her age. Even with Jamie’s good intentions, Dorothea is offended and asks Jamie if this is what he thinks of her. She tells him that she doesn’t need a book to know about herself. He apologizes and puts the book on her desk before exiting the room.

This tension is brought to the forefront again during the dinner portion of Dorothea’s “Crisis of Confidence” party. Abbie, in pain from menstrual cramps, lays her head on the table. After Dorothea tells Jamie to wake her up, Abbie tells the room she is menstruating. Dorothea, annoyed with Abbie, replies, “Abbie, you know what? You’re menstruating, okay, but do you have to say it?” This sends Abbie into a tirade, demanding that every man at the table say “menstruation” in a naturalistic way. A domino effect, Julie relays the tale of her first period. After the conclusion of the story, Dorothea calls the party to a close.

Dorothea’s unconventional parenting and attitude towards life and womanhood only extends so far. When she is approached with concepts and ways of living outside of her realm of knowledge, like announcing that you’re menstruating or discussing ageism, she is no longer open and progressive. I thought the film’s approach to Dorothea’s on-the-surface progressiveness was interesting, especially considering the current political climate. Punk, the spirit of anti-establishment, anti-capitalism, and anti-government, with its pseudo-progressive attitude, is remembered as mostly white men. Watching 20th Century Women during the Trump era, I couldn’t help but recall the Sex Pistols’ Johnny Rotten telling the media that Americans should support Trump and the British should support Brexit; the revolutionary spirit completely void of revolution. Rotten, however, is not the sole figure of punk, and the film does include several non-male and non-white punk icons, including a found photograph of Poly Styrene.

Dorothea’s invitation to have two younger women help raise her teenage son points to the queer nature of their household. William, a man who sleeps with Abbie and dates Dorothea, is renting a room in the house while he renovates it. Julie always seems to be around. And Dorothea treats them all like family. She goes to each of them to discuss her problems and get advice. She only asserts her authority over them when she feels it absolutely necessary. She respects their unique experiences of the world with open arms. What I admire so much about Dorothea over the course of the film is her tenderness and understanding. Never feeling like she needs to fill silence, she takes the time to think before she speaks. After Abbie’s doctor tells her she has an “incompetent cervix”, she and Dorothea lie down together. Abbie asks Dorothea, “was having Jamie like the biggest thing that ever happened to you?” Instead of lying to spare Abbie’s feelings, she replies, “I guess so. Sorry”. The tenderness and care between the characters is palpable throughout the film. There is a unique dynamic where every player is treated equally, each with full respect and autonomy.

As the film closes, however, heteronormativity is restored. Abbie gets married, has two kids, and works out of a studio in her home. She never becomes a successful photographer and she outgrows punk. Julie moves to New York for college, marries a man, and the two make their home in Paris. William gets married, gets divorced, and gets married again. Jamie gets married and has a son years after Dorothea’s death.

Dorothea meets a man who she dates until her death. She dies from cancer a few months before Y2K. She remains forever a 20th century woman.