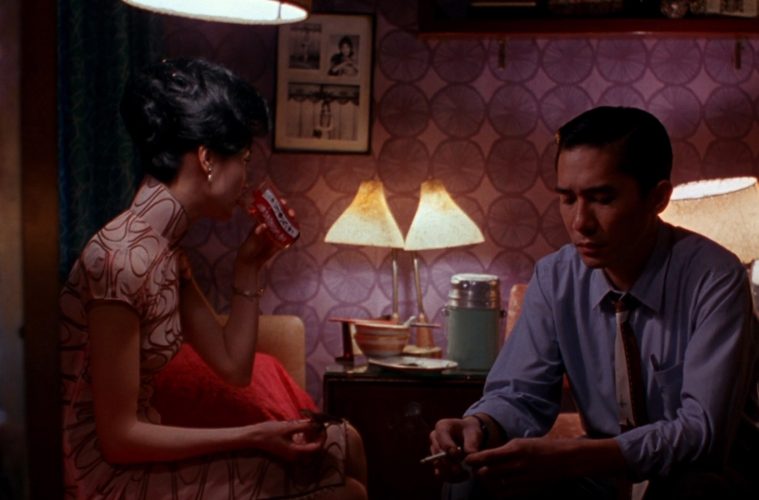 From my very first viewing of Wong Kar-wai’s masterful In the Mood for Love (2000) in the second week of my Introduction to Cinema Studies class in 2013, it has remained one of my favourite films. With its beautiful colours, mise-en-scène, acting (I would die for Maggie Cheung), music, and dialogue, the film is absolutely stunning.

The story of two individuals who grow closer as their spouses have an affair (ironically, with one another), Mrs. Chan (played by Maggie Cheung) and Chow Mo-wan (played by Tony Leung) move into neighbouring apartments. While Mrs. Chan’s husband is often away for work and Mr. Chow’s wife works overtime, they find themselves spending more and more time together. One night over dinner, both affirm that their spouses are having an affair. Mr. Chow’s wife has the same purse as Mrs. Chan. Mrs. Chan’s husband has the same tie as Mr. Chow.

In my completely biased opinion, In the Mood for Love is an extremely intimate film. It’s steeped in warm pinks and reds. Its music is sensual and sad. And its plot is heartbreaking, slow-paced, and tender. This intimacy, however, is not driven by a sexual aspect, but instead by pain and understanding. It is clear to viewers how Mrs. Chan and Mr. Chow feel about each other. The most physically intimate moments they share are in the back of a cab when Mrs. Chan rests her head on Mr. Chow’s shoulder, as well as in the street as they act out their final goodbye. Mrs. Chan cries as Mr. Chow holds her.

Over the course of the film, the two protagonists act out the affair between their spouses. They speculate about how it may have happened. They direct each other on how their spouse would speak or behave. Their first meeting is tense. The protagonists (as well as the audience) are aware that both Mrs. Chan and Mr. Chow know about their respective spouse’s infidelity. Coolly, Mr. Chow asks Mrs. Chan where she got her purse. When she inquires about his asking, he responds that his wife’s birthday is coming up. Mrs. Chan follows suit and asks where Mr. Chow got his tie. They recognize that their spouses have the same purse and the same tie.

Their conversation isn’t filmed as a shot-reverse-shot like most Western spectators are used to, but instead is captured by a fast (and thus dramatic) panning back and forth between the characters. There are frequent tracking shots from behind the protagonists as if a thought is moving through them. Often, the film denies identification with characters as the characters’ dialogue isn’t always accompanied by a shot of them speaking. This is the case during Mr. Chow and Mrs. Chan’s first meeting. Mrs. Chan remarks, “I thought I was the only one who knew”, accompanied by a cloud of unfocused cigarette smoke.

During their second meeting, they attempt to understand how their spouses’ affair could have begun. As Mr. Chow, playing Mrs. Chan’s husband, comes onto Mrs. Chan, playing Mr. Chow’s wife, she says, “My husband would never say that”. In an effort to comfort Mrs. Chan, Mr. Chow offers, “After all, it’s already happened. It doesn’t matter who made the first move”. Angrily, Mrs. Chan walks away and asks, “Do you really know your wife?”. They continue with their reenactments, ordering food for the other person based on their spouse’s taste. (In this scene, Mrs. Chan wears my favourite outfit of the entire film, her iconic daffodil print dress.)

These reenactments cultivate a caring relationship between the two protagonists. Mrs. Chan makes sesame sauce after hearing that Mr. Chow is craving it. She encourages him to write martial arts serials, which she subsequently helps him with. They begin to spend more and more time together under the pretense of writing these serials. When Mrs. Chan won’t accept her half of the writing fee, Mr. Chow takes her for a “special dinner”. During the dinner, they discuss how their landlords are becoming suspicious that there is something unsavory happening between them. Mrs. Chan reflects, “Why waste money? You don’t need me. You can write on your own”. But somehow, their visits persist. Mrs. Chan goes to visit Mr. Chow at his new writing office. When he is sick, she offers to bring him food. Even when he tells her it’s not necessary, she insists. Before she leaves, she tells him, “We won’t be like them”.

The film creates a mirror effect. During the film’s first suggestion of infidelity, Mr. Chow and Mrs. Chan’s spouses are filmed speaking to one another on the phone. Neither of their faces is ever shown during the film, and during its latter half, they aren’t heard from other than in letters and radio announcements. Their conversations are characterized by shots of the spaces they’re in instead of their bodies, and only one side of the conversation is audible to the audience. During the latter half of the film, Mr. Chow and Mrs. Chan’s interactions are filmed like this. They speak about how they shouldn’t see each other. How their landlords might suspect something. How they are in danger of being caught, even though there is nothing happening between them.

Eventually, their reenactments of possible pasts become rehearsals of imminent futures. Their last two rehearsals are of the confrontation between Mrs. Chan and her husband, and Mrs. Chan and Mr. Chow’s goodbye. In both instances, Mrs. Chan cries on Mr. Chow’s shoulder. He comforts her and reassures her that it’s only a rehearsal. The acts of comfort between them, the glances, the hugs, the crying, are the only kinds of physical intimacy the protagonists share. Although they care for one another, they are careful to limit their physical touch. They hesitate to touch hands or stand too close.

A recurring motif in the film is the use of “Yumeji’s Theme”, originally from Seijun Suzuki’s Yumeji (1991), which plays during cut-aways of the protagonists crossing paths. As the film continues, these cut-aways are accompanied by the diegetic sound of rain, which is later substituted in the final one by Mrs. Chan’s cry. This signals an increase in intimacy. During the first cut-aways, the protagonists barely interact. Walking past each other on their way to buy noodles. In the last, Mrs. Chan sobs on Mr. Chow’s shoulder. Although these moments are part of the narrative structure, they seem very distant from the diegetic world. In these moments, the audience has time to reflect on the intimacy between the characters. The tenderness, care, and ultimately love are not communicated through acts of physical intimacy but instead through an understanding of heartbreak and infidelity.

Mr. Chow’s confession of love for Mrs. Chan comes during the rehearsal of their goodbye. As she repeats half-heartedly the mantra for their relationship, “We won’t be like them”, he tells her, “I used to think that too, and it didn’t worry me. I thought we wouldn’t be like them. But I was wrong. You won’t leave your husband. So I’d rather go away”. Sadly, Mrs. Chan replies, “I didn’t think you’d fall in love with me”. Mr. Chow solemnly answers back, “I didn’t either. I was only curious to see how it started. Now I know. Feelings can creep up just like that”. In their final moments in Hong Kong together, Mrs. Chan lets Mr. Chow hold her hand during the cab ride home.