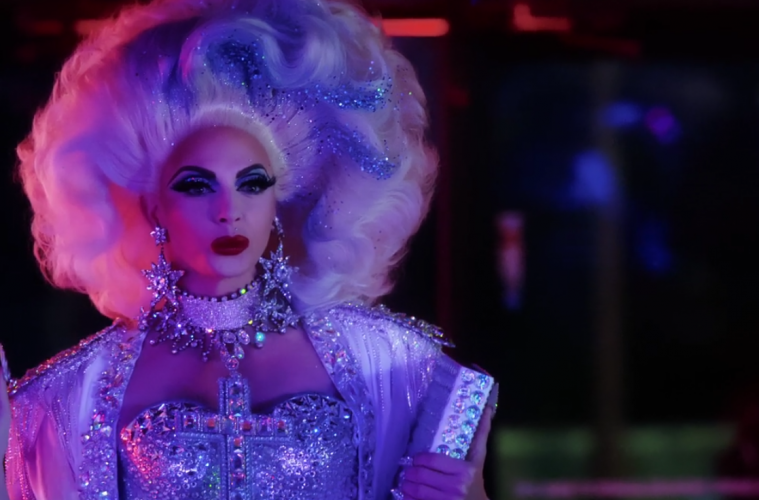 Always and Forever: Alyssa Edwards, ‘Dancing Queen,’ and the Power of Drag

“To me, [Alyssa Edwards] is the most memorable creature to ever walk through those doors.” – Katya, ‘RuPaul’s Drag Race: All Stars’

Alyssa Edwards (Justin Johnson’s drag persona) is one of the most powerful drag queens to ever emerge from RuPaul’s Drag Race. We all know her catchphrases (“always and forever,” “back rolls?!” and *tongue pop*), she sings, she owns and runs her own dance studio, she has her own YouTube series (Alyssa’s Secret), and is now the subject (and arguably the creative control behind) the Netflix docuseries, Dancing Queen. Alyssa Edwards is known for her Southern Charm, her eccentric “Alyssa-isms”, her big hair and lashes, her sparkling pageant-winning costumes, and her seemingly endless energy that she effortlessly channels into her passion for dance, drag, and family.

It’s difficult to explain “Alyssa-isms” to anyone who hasn’t seen either Drag Race or Alyssa’s Secret. She seems to speak her own language, filled with short phrases intended to pithily sum up any given situation, utilizing words commonly spoken in queer communities as well as Southern/Texan ones. Some of her favourites include: “I don’t get cute, I get drop dead gorgeous,” “Don’t dream it, be it,” and “Oh no, ma’am!” Dancing Queen is full of Alyssa-isms, most of which are uttered in talking-head interviews where she sits in front of a red curtain background wearing glamorous, sequined outfits and feathers, sparkling earrings, and the biggest, blondest wigs you’ve ever seen – commenting on the state of affairs at Beyond Belief (her dance company) and even sometimes directly referencing “Justin,” her identity out of drag. Alyssa-isms are often grammatically confounding (“Do you take him to be your awfully wedded husband?”), bordering on nonsensical, and yet her charm and genuinely good intentions always shine through, making her one of the most loveable queens of all time.

Dancing Queen’s talking head interviews are interspersed between scenes of the young dancers at Beyond Belief, their parents, and Justin’s day-to-day activities, which significantly include buying a house, going on dates, and reconnecting with his sisters. Justin speaks to the camera out of drag, similar to the confessional interviews/commentaries given by Drag Race contestants. While Alyssa and Justin overlap in many ways – they are both exuberant, self-assured, and naturally have the same perspective on issues both social and personal – it seems that Justin’s talking head segments are framed as more down-to-earth, personal, and emotional. Justin’s segments often feature him talking about his childhood, his family struggles, and his trajectory from a poor, insecure gay boy from Mesquite to the fabulous Alyssa Edwards. Conversely, Alyssa’s segments are more lighthearted, offering sharp commentary on the worlds of drag and dance both. Alyssa offers Justin an opportunity to shed his insecurities and to boldly, confidently declare how fabulous and successful she is. Becoming Alyssa allows Justin to distance himself from concerns of money, dance moms, and family drama, and to focus on channeling his creative impulses into entertaining performances. 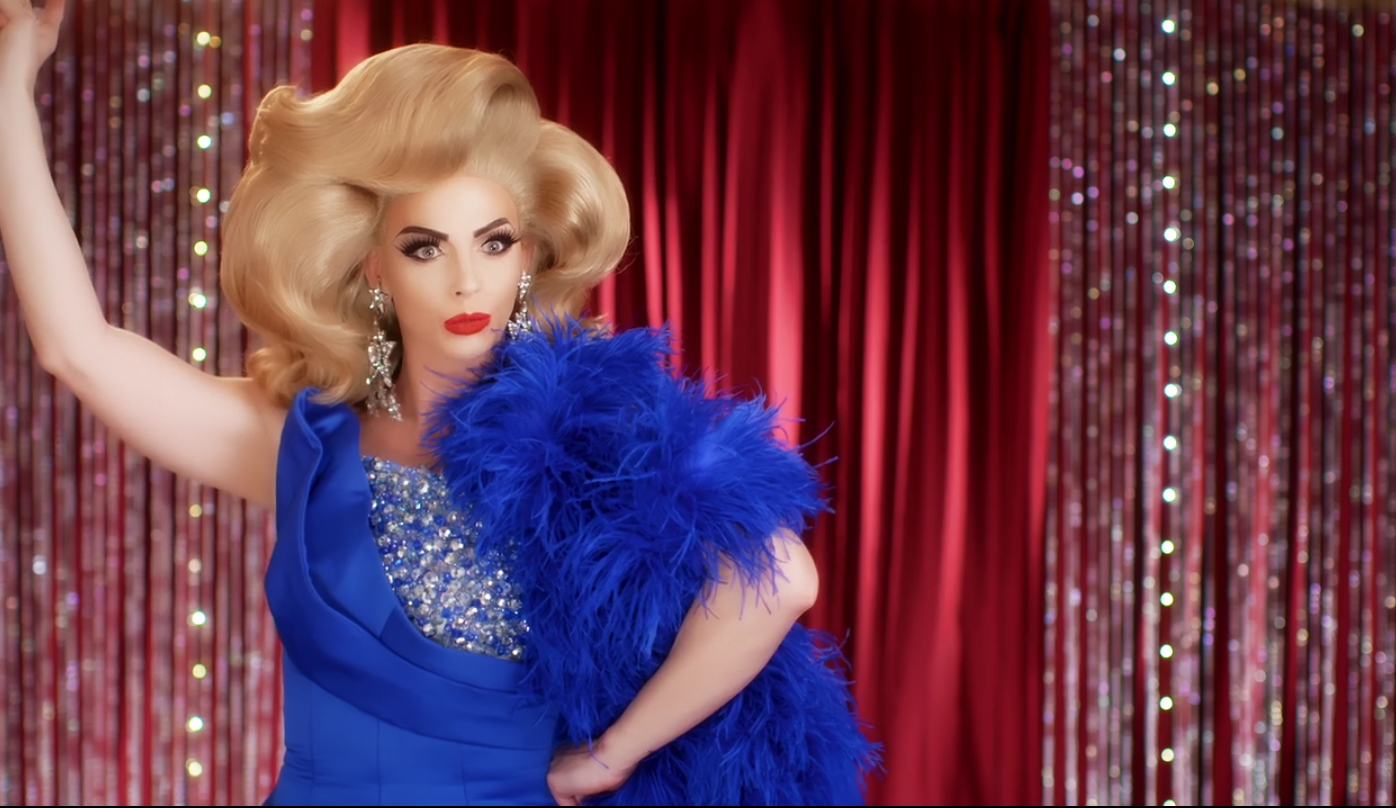 Each episode of Dancing Queen features a musical interlude in which the docuseries transforms into a glittery, campy, gauzy drag performance. Much like Drag Race, Dancing Queen distances itself from gritty, minimalist reality television aesthetics and instead commits itself to colourful, soft-focus imagery that’s perfectly in keeping with drag’s tongue-in-cheek alignment with everything feminine – including the gendered conventions of cinematic framing and lighting. It is electrifying to watch Alyssa’s perfectly-choreographed drag performances, created specifically to show viewers what she does best. The show spends a lot of time within the walls of the dance studio, observing rehearsals and following the tensions between dancers, instructors, and the ever-angry dance moms, but the show is at its most joyous when Justin performs as Alyssa. In the first episode, Alyssa emerges out of a rainbow-coloured wedding cake in a shiny, pink-fringed dress, a towering yellow afro, and pink thigh-high boots, and lip-syncs to RuPaul’s “A Little Bit of Love.” The camera glides through the crowd at the wedding that Alyssa has just officiated moments ago (for two of her closest friends, Neil and Robbie, who also design clothes for her), and cuts between the fabulously dressed guests and Alyssa as she leads the party. Other performances throughout the series include Shania Twain’s “Man! I Feel Like a Woman,” Miley Cyrus’s “Wrecking Ball,” and RuPaul’s “Geronimo.” These beautifully orchestrated interludes offer a look into the world of drag performance, displaying Alyssa’s humour, energy, and fierceness. Dancing Queen thus plays a part in bringing drag further into the mainstream, drawing audiences in and imploring them to be dazzled by this queerest of art forms.

It is no secret that RuPaul encourages her Drag Race girls to become entrepreneurs, to brand themselves and find ways to make money off of their unique drag personas. By North American standards of success, RuPaul Charles is the most powerful drag queen in the world. She is the creator and host of one of the most popular current reality television series (and its spinoffs, All Stars and Drag U), has written books, recorded albums, and sells all kinds of RuPaul merchandise, like perfume, shoes, chocolate bars, and apparel. RuPaul has no qualms about shameless product placement on Drag Race, and variously promotes Absolut Vodka, Interior Illusions, Anastasia Beverly Hills, and the dating app Scruff. RuPaul encourages the queens to become smart businesspeople, to ensure that they can make a living off of their drag personas. As drag culture moves into the mainstream, more and more queens are able to do just that. Dancing Queen shows us how Alyssa Edwards built herself up from being a poor, young kid, to a pageant-winning drag queen, to one of the most beloved reality television stars whose name is synonymous with the power of the RuPaul’s Drag Race empire.

Despite her success, Alyssa does not seem to have a calculating or ruthless bone in her body. Oftentimes, financial success and power go hand-in-hand with an inflated ego, a lack of regard for others, and an obsession to gain the upper hand at any cost. One of Alyssa’s (and by extension, Justin’s) greatest charms is how genuine she always seems, in the way she speaks and treats others. During the second season of RuPaul’s Drag Race: All Stars, fellow contestant Phi Phi O’Hara becomes frustrated with Alyssa, arguing that the judges consistently give her a pass for subpar performances in the challenges and on the runway because they love her Alyssa-isms. While Phi Phi is not entirely wrong, it is unfair to begrudge Alyssa for the way the judges receive her (sometimes unintentionally) hilarious performances. While any documentary or reality television series is structured by biases, careful editing, and the inevitable fact that people act differently when they know that they are being filmed, Dancing Queen confirms that Justin is always “authentically, unapologetically” himself. 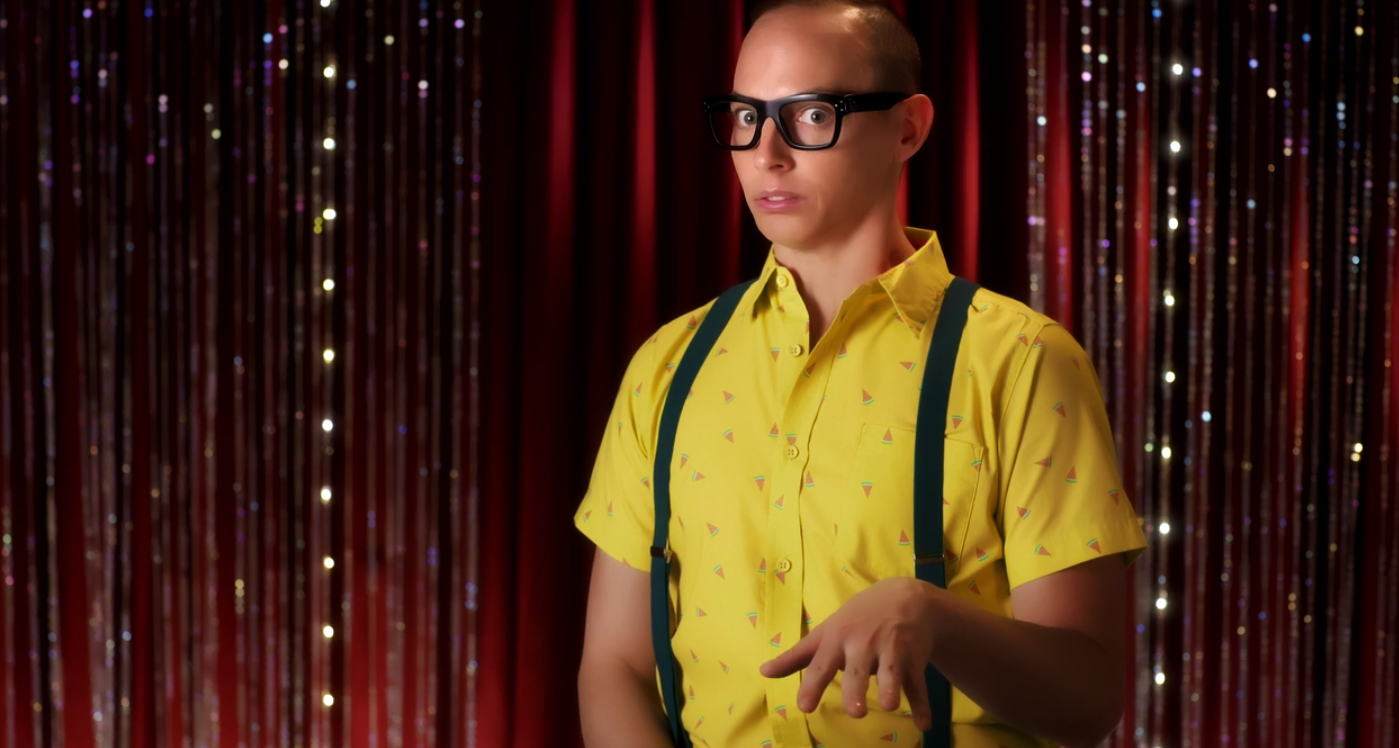 Dancing Queen works to reinforce Justin’s rags-to-riches story, with Justin explicitly expressing gratitude and genuine emotion at the fact that he has made a living off of his creative passions. In the second episode, Justin visits his childhood home and proclaims, “I was destined to be poor, white trash.” When Justin purchases a big, beautiful home in a gated community later in the episode, it reinforces the fact that he was able to escape what he felt was his fate. Instead of going down a path of addiction, poverty, and destitution, Justin was able to make a career out of his two passions: drag and dance. His career has provided him with financial stability and a reputation as a beloved and eccentric queer entertainer. Justin’s incredulity at the life he has built feels genuine, but it is important to consider that perhaps Justin has been afforded opportunities that other queer performers – queer people of colour, particularly trans men and women – will never have access to. As a white gay man, Justin is able to attain positions of power and financial stability more easily than most marginalized queer people in America and all over the world. This is not to discount the remarkable fact that a poor drag queen from Texas made her way onto RuPaul’s Drag Race and now makes a living performing and teaching dance at her own studio, but to just remember that power imbalances exist within the queer world and the world of drag as much as they do anywhere else.

Alyssa Edwards and Dancing Queen certainly offer a beacon of hope for queer people who feel invisible and powerless. Despite the difficulties that certainly exist for Justin as a drag queen and a gay man, he projects an incredibly positive outlook, filtering the entire world through a glittery filter of sequins and feathers. Even when Justin is faced with hard truths regarding his family and the toxic behaviour of the dance moms, Alyssa is there to offer a funny, cutting remark and remind Justin that he is fabulous and can handle anything. Dancing Queen shows us that perhaps it is important to channel our inner Alyssa Edwards when we are faced with seemingly impossible situations – don’t get cute, get drop dead gorgeous.