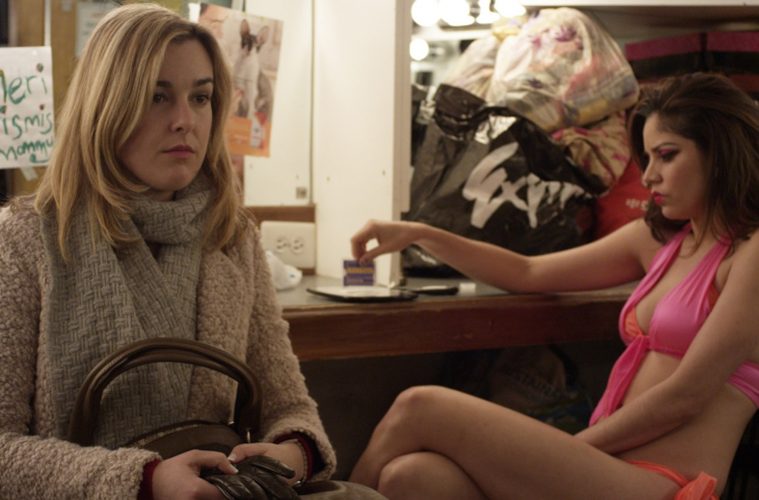 ‘White Reindeer’: A Blue Christmas from a Female Perspective

Men behaving badly at Christmastime has been canon since Ebenezer Scrooge. Bad Santa drinks, swears, and fucks, the bros in The Night Before experience a wild, pot-filled Christmas Eve, and pretty much all of the men in Love, Actually are – actually – terrible.

Conversely, women-aimed romantic comedies and dramedies, popularized by Hallmark and Lifetime (and adopted by Netflix, with slightly more diverse casts) provide us with a sort of hot-cocoa comfort. We get to see our faves from Full House, The Wonder Years, and Party of Five in some sort of fish-out-of-water/city-girl-in-a-small-town/commoner-and-royal/“ugh, I can’t stand this blandly handsome white guy but he’ll 100% win me over”-type-situation. It’s all too wholesome, too heteronormative, and too saccharine.

Sometimes, you want it darker. On the flipside, there’s Carol (2015), the luscious, lesbian, road-trip melodrama in shades of white and red, with endless shots of Cate Blanchett making cigarettes look glamorous again. Another fantastic queer addition to the alt-Christmas canon is Tangerine (also released in 2015). As a ground-breaking, iPhone-filmed comedy about a trans woman who learns that her boyfriend is cheating on her, it’s a Christmas Eve caper. You’ve also got the 1974 sorority horror classic, Black Christmas, as well as its 2006 remake, and countless Christmas horror B-movies. But I want to add a lesser-discussed movie to the Dark, Woman-Led Christmas Movies must-see list: Zach Clark’s 2013 indie dramedy, White Reindeer.

I found White Reindeer the same way that I’ve found many previously-unheard-of indie movies: while randomly browsing through Netflix. When I came across its cover image of a nonplussed-looking woman standing in front of a Christmas tree silhouette made of lines of cocaine, I knew this was a movie for me. As much as I love Christmas movies, I love ones about messy, flawed, and unapologetic women even more.

White Reindeer centers around Suzanne Barrington (Anna Margaret Hollyman), a suburban, Christmas-loving real estate agent whose world comes crashing down shortly after her husband, Jeff, is brutally murdered in early December. To top things off, Jeff’s buddy confesses to her that Jeff had been having an affair with a stripper.

Of course, it’s awkward when Suzanne and Autumn (whose real name is Fantasia) meet face-to-face. They’re cordial and polite. But the more that Suzanne feels alienated by her well-meaning colleagues and her MIA brother, the lonelier she feels. And if anyone knows how she feels, it’s Fantasia.

Suzanne ends up joining Fantasia and her friends for a night on the town, and soon becomes wrapped up in their escapist world of dance clubs, cocaine, and shoplifting. But Suzanne and Fantasia’s friendship goes deeper than their party-girl antics – an unlikely bond forms between the two women out of their mutual grief for a man they both loved at the same time.

When a rift happens between Suzanne and Fantasia’s friends, Suzanne seeks another kind of comfort. Shortly before her husband’s death, Suzanne had sold a house down the street to a couple named Patti and George. While borrowing a vacuum from her new neighbors, Suzanne can’t help but notice a certain type of chair designed for sex in their living room. When she returns the vacuum, she asks the couple for an invitation to their annual Christmas party – which, of course, ends up being a dark, masked affair with a lot of nice people getting naughty! Suzanne joins in and has as much fun as she can, but ultimately, she still ends up feeling empty.

And that’s the thing about depression. It isn’t about sadness; it’s about feeling numb, feeling like a shell, feeling empty. Sometimes, getting laid will fill that emptiness, as will buying a red cashmere sweater. Even though the fulfillment is temporary, at least you’re feeling something.

Two of my favorite movies about yuletide-adjacent malaise are It’s a Wonderful Life and A Charlie Brown Christmas. George Bailey’s hopelessness in It’s a Wonderful Life resonates now just as much as it did in 1946, as does Charlie Brown’s disenchantment. Both characters can’t shake their profound sense of emptiness during what’s supposed to be the most wonderful time of the year, and I love both of them for it. But Suzanne Barrington is the Christmas heroine I was waiting for – a modern adult woman going through a mental health crisis during the holiday season.

There’s a great sense of comfort and joy in being able to see a woman struggle with relatable issues in a holiday movie. The thing is, we’ve already got tons of holiday movies about us struggling with the in-laws or kids, or getting that promotion, or getting the hometown sweetheart. Over 40% of people experience depression during the holiday season, and there’s an entire empire built around Christmas movies starring women. Maybe one day, we’ll see a Hallmark movie where Alicia Witt and Cameron Mathison bond over their struggles to find the right SSRI after a meet-cute at their kids’ Christmas pageant! This kind of representation – especially presented in a small, no-big-deal kind of way – would help others struggling with mental health issues feel seen.

White Reindeer’s exploration of one woman’s journey in processing her grief, depression, and trauma helped me feel seen. In Suzanne Barrington, I have my own George Bailey-type depressed Christmas anti-hero. So, if you’re looking for something a bit more offbeat this holiday season, definitely check out White Reindeer. Maybe you’ll find that sense of connection you’ve been looking for, too.