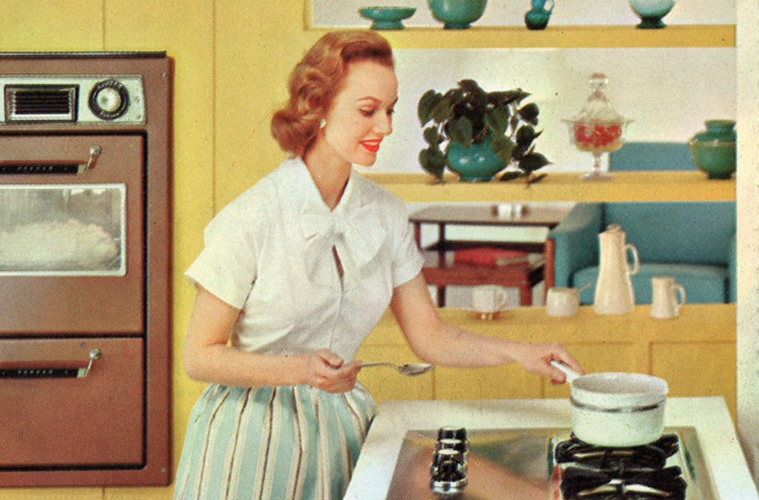 I once read that if you’re craving chocolate, what your body is really telling you is that it’s deficient in magnesium, and to satisfy that craving without hating yourself, you can munch on some dark leafy greens or spoon some yogurt. That’s obviously ridiculous, but I do believe your body is quite efficient at letting you know what it wants in mysterious and hormone-driven ways.

These idols of mine are not waiting for their husbands to get home so that they can get a stuffed-mouthed thumbs up on their lemon chicken. Their warm and inviting smiles are not for men who bring home the bacon. They smile at the camera, they smile at us, and they certainly smile at the cheques that most likely make up the bulk of their family income. They profit off of the same ideology that put them there in the first place. There is nothing wrong with a woman choosing to be a homemaker, but the strict relegation of women to the domestic sphere has prevented them from achieving the same economic prosperity as men.

Martha and Ina do not subvert these roles by turning them into multi-million dollar careers; they reinforce them by constantly creating new standards for a mostly female audience to live up to. They are insanely good at what they do, which isn’t limited to cooking or crafting or gardening. They excel at selling traditional gender roles to women who are constantly struggling against a system that was never, ever designed for them. Martha and Ina paradoxically make this system work in their favour. But realistically, this is only possible for a select few and they’re not helping when they reinforce women’s supposedly preferred place in the kitchen (or in their case, the studio kitchen).

I first realized the suspiciously traditional gender expectations placed upon female chefs while watching an innocuous Anthony Bourdain special where he gets to travel the world and try a combination of really great authentic food and really bad authentic food (bull testes, anyone?). I thought to myself, “Damn…. This seems like a really good gig.” I’d eat all the bull testicles in the world for a chance at his job.

But then I realized that I couldn’t think of a single television show or Netflix special where a professional female chef does anything other than stand in a fake kitchen and entertain an audience with just their charm and (let’s be honest) insanely good looks. Even $40 a Day with Rachael Ray mostly consisted of her (un)convincingly arguing that it’s possible to spend less than that much money on food each day while travelling.

And then you consider all the fun activities that male cooking personalities get to take part in, like hunting, fishing, and trying to fix Midwestern restaurants with charismatically crazy owners. Those shows are often given to professional chefs: chefs who have run or (in Joe Bastianich’s case) owned award-winning restaurants. It’s undeniable that Gordon Ramsay and Jamie Oliver have unique charm and talent, but surely there are at least a few female chefs who can muster up some fake enthusiasm for fried tarantulas. They don’t even really need to be professional chefs; I want to see Ellen DeGeneres explore “parts unknown”.

Women don’t have some innate desire to stay in one place and serve. The truth is, our current economic and political system was not designed for women to fully take equal part in. Yes, success is possible with drive, ambition, luck, and a hefty dose of denial, but working within a flawed system doesn’t ultimately solve anything. Martha Stewart and Ina Garten don’t structure their shows around furthering a conservative agenda, but the roles they inhabit do just that. And they continue to participate because it positively benefits them. Their entire careers are symptoms of a larger issue, one that could be remedied just a bit if women and men could cook whatever the hell they wanted, wherever the hell they wanted.