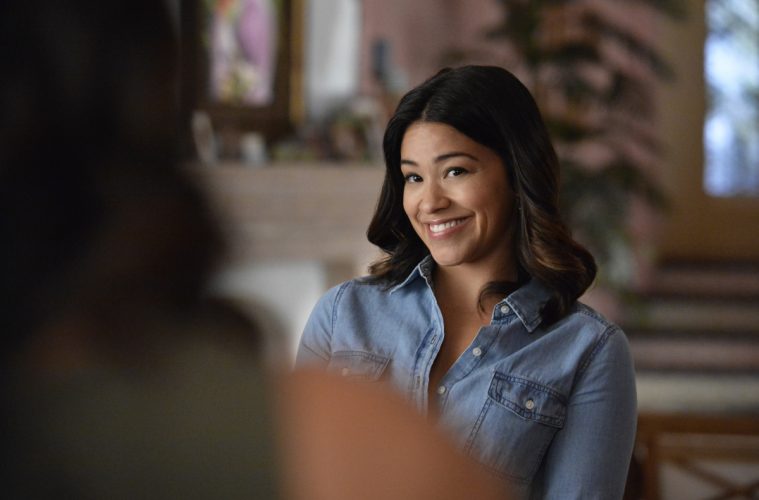 Photo: The Tracking Board

Why Jane Villanueva is My Latina Hero

Jane the Virgin is symbolic of something so much more than Latino representation. Though deeply important and refreshing to see a real “Spanglish” family mirroring my own household on our TV screen, what has been even more meaningful is having the show embraced by mainstream audiences. It used to be that my exposure to telenovelas was restricted to my time in Colombia, where I sat crouched in front of my abuelos’ TV, flipping through endless channels of these Latin American soap operas. Today, I get so much joy from being able to discuss Jane, her family, and her story with friends of mine who are genuinely enjoying their first exposure to a real telenovela. This is my medicine to the perpetual homesickness that comes with the immigrant family experience.

Jane’s purpose goes far beyond checking off a box for Latin representation. She exists in a show where we aren’t just seeing multiple Latino characters on TV, but Latino characters immersed in Latina culture, free of tokenism and in all of their multiplicities.

Not only is Jane embraced as a female protagonist who escapes the cleaning lady pigeon-hole usually reserved for Latina women on screen, but she is a multidimensional one at that. In fact, between Jane’s famous father and her household of three generations, the show radically depicts Latinos in every economic stratum.

Not to mention, it is incredibly refreshing to see a multi-generational immigrant family living under one roof without any of the shame or stigma that I felt came with my own three-generational household growing up. It wasn’t a home life I ever saw reflected by my classmates, let alone by families I would see on the big screen. Quite incredibly, Jane the Virgin magically depicts the authentic warmth and love shared by and between Latinos, both in and outside of the home. Throughout the seasons, you see the Villanuevas lovingly embrace friends and partners in a way that appropriately highlights the significance of relationships and family in Latina culture.

As a young woman with empanada- and arepa-loving roots, I find heroism in Jane’s embrace of her authentic body. It is notable to see a female lead who is appreciated for her intelligence and depth of character, especially in a show that is still so focused on sex. Again, Jane dodges the ‘hoochie’ Latina trope that pervasively serves to hypersexualize Latina women. Though she chooses to reserve sex for marriage, the show avoids the one-note depiction of virginity that’s commonly shown on television. By giving Jane the space to explore her sexuality and sexual fulfillment on her own terms, she is able to transcend the falsely constructed virgin-whore dichotomy. The show successfully explores the nuances of choosing to wait for marriage in a way that does the complexity of this choice justice.

Jane the Virgin speaks women’s love language, and does so in a way that adds depth to storylines that are often labelled as shallow. In all of their individuality, each of the Villanueva women represents the variability of femininity. Like any other telenovela, it has layers of storylines that, using quirky text, narration, and instant messaging, are woven with social messages including the realities of undocumented workers, illegal immigration, and abortion.

Moreover, in following the show through its four seasons, you bear witness to its growing understanding of the importance of exploring love in many more of its manifestations with the insertion of prominent queer relationships that are free of the sort of queer-baiting that is typical of other popular TV shows.

You also see Jane explore her own relationship with love stories and feminism. She struggles with her grad-school-supervisor-turned-mentor as she comes to ultimately reject the notion that art that is focused on romance, or that is more often consumed by women, is inherently shallow and anti-feminist. Jane explores the concept that women’s strength is not sedated by love and that their liberty is not limited by emotional connection. In her development as an author of romance novels, she writes her nuance into existence by fearlessly serving up passion and sensuality alongside vulnerability, as she processes the grief associated with the death of her husband. Meanwhile, Latinos are able to finally rejoice in the visibility of other great Spanish icons who shaped Jane’s career. It felt as though the little Colombian fangirl in me shared an intimate moment with Jane as I watched her swoon over meeting Isabel Allende and rave over Gabriel García Márquez’s magical realism.

Perhaps what thrills me most about Jane the Virgin is that there exists not a single ounce of shame in the show’s embrace of soap-opera level drama. This allows me the space to experience intense thrill and deep satisfaction when I get to share classic telenovela moments with friends who are experiencing them for the very first time. Meanwhile, the show does so without sparing any quality or humility. The storylines remain simultaneously meaningful, sophisticated, charming, and hilarious. The narrator’s punctuation adds palatability to a genre of television that has, historically, had a hard time finding its way onto televisions, and into homes, around the world.