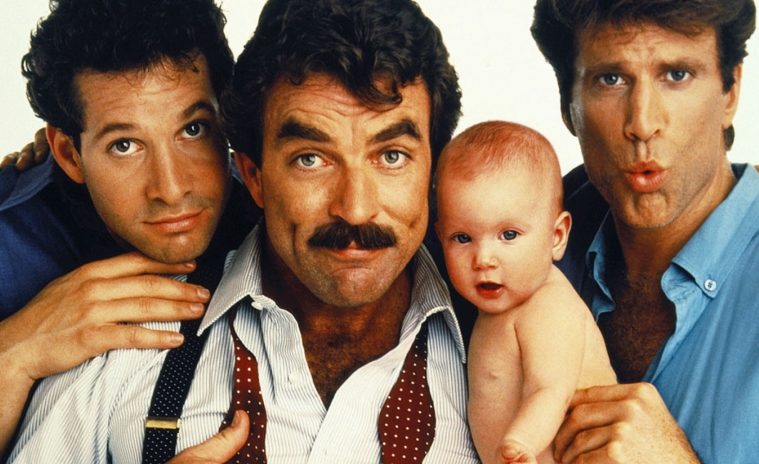 What ‘Three Men and a Baby’ Taught Me About Gender Assumptions

In 1987, director Leonard Nimoy was still living in the shadow of his Star Trek fame. New to the comedy genre, his directorial career had so far consisted of episodes for TV and Star Trek films. Yet it was his adaptation of the French comedy Trois hommes et un couffin (1985) that would prove to be his most successful venture. When Three Men and Baby opened in cinemas in 1987, the film captured audiences to become the highest grossing film of the year, earning over $167 million.

In Nimoy’s adaptation, the three men are Peter, Michael, and Jack – successful professionals living the New York yuppie dream. Their large apartment in Manhattan serves as the base for their lavish bachelor lifestyle, full of parties, beautiful women, and cartooned walls.

During the 1980s, the glorification of wealth and status in film had become a genre in itself, with films like Oliver Stone’s Wall Street (1987) and Brian De Palma’s Scarface (1984). They featured high-flying male leads in metropolises, whose hedonistic tendencies and seemingly endless freedoms had become aspirations for us all. In Three Men and a Baby, Tom Selleck, Steve Guttenberg, and Ted Danson’s characters symbolize this new social era as the cream of 1980s celebrity, each displaying a variation on the ideal male. In essence, they are men of the world with few responsibilities. That is, until the arrival of Mary.

Peter, Michael, and Jack are initially dumbfounded by the appearance of Baby Mary, and the comedic elements of the first half of the film rely on their ignorance and humorous interactions as they try to find their feet. Men rushing to the shops in search of baby equipment, men as they struggle with diapers, men shoving the baby into the boot of the car.

Essentially, the film’s feel-good element comes from the men’s vulnerability with the infant, and the main story arc consists of the trio’s growing maturity. They are ultimately redeemed from scumbag territory by their love and care for the cute infant. However, there also exists a flipside to this narrative.

Mary, although a surprise, has not appeared out of thin air. Her mother Sylvia’s desperate note reveals that her decision is a cry for help after months of struggle: “I can’t handle this, I don’t know where to turn.” Sylvia, played by Nancy Travis, represents everything that the men are not. She is alone, a single mother struggling both to make ends meet and to care for her newborn.

Herein lies the pretense: The men’s struggles are funny until you realize that the tasks they learn are tasks women are not only expected to know inherently, but to relish. While the men’s acceptance of this role and their responsibilities are congratulated, the mere sight of Sylvia with her baby would not bring joy and friendliness from strangers. This is, of course, a double standard.

Three Men and a Baby conveniently skirts around the issue of Sylvia’s struggles. However, this narrative would have resonated with the realities of US audiences, where, according to the United States Department of Labor, in 1984, the number of working mothers stood at 19.5 million.

Sylvia’s inability to find affordable childcare and the lack of maternity leave would have been, and still is, the reality for many working mothers. The Second Shift: Working Parents and the Revolution at Home (1989), by Arlie Russell Hochschild and Anne Machung, details the phenomenon of domestic chores and caregiving as unpaid duties more likely to be burdened on working mothers. In Three Men and a Baby, it eventually takes four working people to look after one child.

By the end of the 1980s, films were beginning to address the predicament of the work/life balance. The emergence of the female executive in films like Working Girl (1988) and One Fine Day (1996) showed women who had broken through the glass ceiling with shoulder pads and heels as high as their aspirations. In Three Men and a Baby, this character is referenced through Peter’s long-term, non-monogamous partner, Rebecca (played by Margaret Colin). She has a career and enjoys her freedom in the city, but is still the first to be called when Peter is landed with the baby. “Why are you asking me?” “You’re a woman.” “That doesn’t mean I know about babies.” Again, she is expected to have innate mothering skills and perform the role of traditional mother with the same eagerness we see earlier from Mrs. Hathaway, the nosy, middle-aged building supervisor.

Comedies about families are a hard thing to get right. They have to be punchy yet heartfelt, angst-ridden, joyful, and say something new about a social dynamic many of us are still trying to figure out. Under Nimoy’s direction, Three Men and a Baby struck comedy gold as a light-hearted film that was reflective of society. It signified the birth of the modern dad and the strength of the independent working woman. Yet watching the film, it is Baby Mary I wonder about most. She’d be 21 now, possibly at the beginnings of her own career, facing unequal pay and future conflicts between family and work. I hope she got to study at a college, and one that dealt with sexual assault seriously. Most of all, I hope she’s successful in navigating the gendered assumptions that still prevail in a society that is supposingly moving forward.