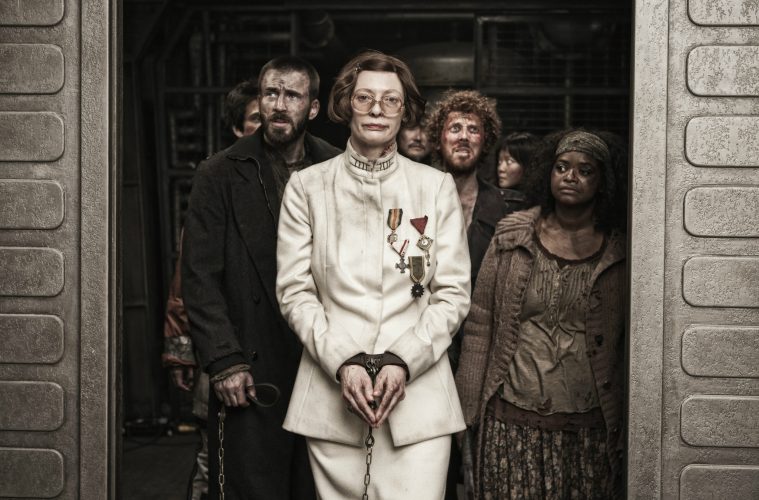 ‘Snowpiercer’ and the End of the World

A title card at the film’s beginning announces that, “The precious few who boarded the rattling ark are humanity’s last survivors” – the ‘ark’ being the Snowpiercer, a train that travels around the world in a continuous, year-long loop.

The film opens seventeen years after the apocalypse, and it’s immediately clear that one of the only things to have survived is class stratification. The Tail Enders live in the back of the train and are subjected to random violence (referred to as “population control”), dismal conditions, and constant surveillance. Their well-off enemies inhabit the front of the train and live in what comforts they have managed to save from the icy abyss that used to be society.

Curtis, a young Tail Ender played by Chris Evans, is sick of it all and wants to lead a rebellion to capture the engine room and overthrow the bourgeoisie Front (Bong describes the story as “Spartacus on [a] train”). What ensues is nothing short of a miraculous work of cinema. Shot entirely inside the train – a fully constructed, CGI-less set – Bong and cinematographer Hong Kyung-pyo manage to create a dynamic, topsy-turvy world that never feels too claustrophobic.

While Wilford, played by Ed Harris, is a near-perfect antagonist and the ultimate symbol of the capitalist dregs of humanity, we don’t see him in person until the film’s ultimate climax (the penultimate climax being the devastating speech delivered by Curtis outside the engine room door).

Mason, on the other hand, proves her inhumanity from the first scene. When a man throws a shoe at her, Mason orders that his arm be frozen and smashed with a sledgehammer. Originally written as a man, Tilda Swinton’s exaggerated, grotesque mannerisms make the gender of the character even more compelling. In the perverted, seventeen-year maintenance of Western patriarchal systems, symbols like the military medals pinned to her jacket, the title of “Sir,” and her ostentatious fur coat, are used by Mason to visually establish herself as the ultimate bureaucratic villain, wearing masculinity as a uniform.

One of the most chilling moments in the film is the satisfied, determined tone in which Mason makes an announcement before the epic New Year’s comeback fight: “Approximately 74% of you will die.” And this is true, but she will end the battle a hostage of the angry Tail Enders, chains and all.

This is the primary theme of the film: that those who refuse to “know [their] place” and “be a shoe” will give their lives to get it on the other foot. But Bong seems to ask: for what purpose? Unlike Nam (played by Song Kang-ho), who wants to escape the train to return to a world he knows is slowly defrosting, Curtis is on a mission not to destroy the evils of society, but to upend it the Tail Enders’ favour.

But when Wilford offers Curtis the chance to take his position after showing him what it entails (read: child labour), Curtis is disgusted by the prospect. He realizes that there is no ethical way to run the train. In the end, Curtis sacrifices himself to protect Timmy and Yona, perhaps the only two remaining innocent people in the world. Indeed, Bong rejects the reversal of power that Curtis spends the majority of the film attempting to achieve, choosing instead to champion the destruction of the capitalist system altogether.

Which brings us to the ending of the film, AKA the end of our species. Nam’s explosion triggers an avalanche that derails and destroys the entirety of the Snowpiercer. What we first think to be the last shot lingers on the train wreck, surrounded by snow and eerie silence. Never before had I witnessed an apocalypse movie that flat-out killed humanity wholesale. Usually, these films end on a note of hope or redemption. It was an unsettling visual, to say the least.

But suddenly, we return to the interior of the engine room. Timmy and Yona have miraculously survived, and after bundling up in fur coats, the train babies take their first steps onto the surface of the earth. They hold hands and gaze onward, the camera finally settling on a polar bear nearby, and Snowpiercer draws to a close.

Bong seemingly attempts to depict humanity’s fatal hubris. Even when trying to conceive the end of everything, we can’t quite imagine the end of ourselves. I reasoned that Timmy and Yona would soon perish in the unforgiving exterior (by bear attack or otherwise), ending humanity in its entirety. Yet Bong’s refusal to show this inevitable extinction is a damning and self-aware reflection of our own perceived eternality. I thought this to be nothing short of genius.

There’s a succinct passage to describe this idea in Margaret Atwood’s MaddAddam, another work of speculative fiction about the last days of our species: “The reason you can’t really imagine yourself being dead was that as soon as you say, “I’ll be dead,” you’ve said the word I, and so you’re still alive inside the sentence. And that’s how people got the idea of immortality of the soul – it was a consequence of grammar.”

The irony of my analysis is that the directorial intent behind the ending is diametrically opposed to it. Bong Joon-ho imagined the end of humanity only as we know it, with a new generation emerging from the ashes of the train. To Bong, Yona and Timmy represent a chance to create a world free from the evils of a white patriarchal capitalist system and its related inequality. It’s certainly no accident that the two sole survivors of the human race are a teenage Korean girl and a young Black boy. Bong said he “always envisioned this ending where they finally escaped to the outside world,” but he “has a slight regret” that “people think the bear is going to eat the kids.”

To be fair, it is difficult to imagine that a drug addict and an emaciated child labourer –
neither possessing any skills applicable to the world outside the train – would be able to survive a harsh arctic landscape, let alone outsmart a polar bear. Still, regardless of the specifics of Yona and Timmy’s situation, Bong’s intent still rings true: “Outside the train, life is actually returning. It’s nature that’s eternal, and not the train or the engine. […] Yes, [the rest of humanity is] all dead, and that’s a bit harsh. But it’s a sci-fi film: If you can’t say these things […] in a sci-fi film, where can you?”

He’s right, and it’s one of the reasons why I love this film and the genre so much. It extends the unsavory parts of our present to paint a seemingly fantastical, but horrifyingly believable, picture of our future.

Snowpiercer uses the allegory of a perpetual motion machine to put the audience face-to-face with the uncomfortable questions of our reality. Are humanity’s attempts to reverse climate change futile? Can our social, political, and economic systems ever be fixed, or is the solution to simply destroy it all and build from the ground up? What would the end of our world look like, and what would come after it? Bong’s extrapolations are as good as any.